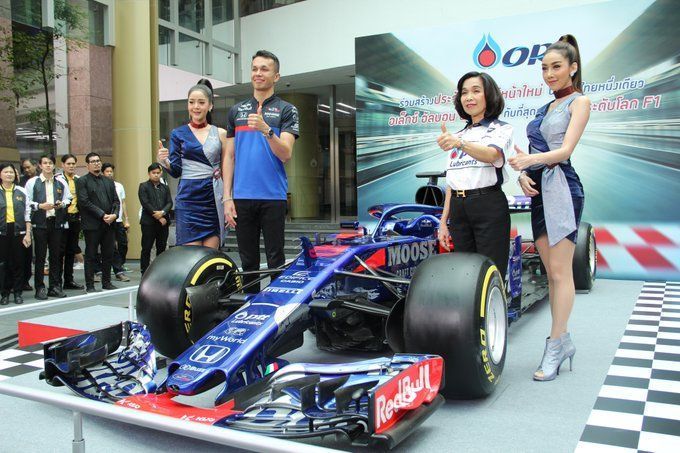 Toro Rosso is independently pushing for sponsors and it has roped in two from Thailand through Alexander Albon for the 2019 F1 season ahead of German GP.

Albon joined Toro Rosso in 2019 without any backing as he came in to replace Red Bull Racing-bound Pierre Gasly alongside returning Daniil Kvyat, who came in for Brendon Hartley. It was a long work for them to get Albon out of his Nissan Formula E contract.

The Thai racer came in without any F1 track run with the filming day being his first, followed by the pre-season testing. Despite the lack of mileage, Albon has done well to adjust in F1 with Toro Rosso boss Franz Tost, pretty happy with his performances.

He is still learning his way in, whether it is on track or off it. While one of his dream came true to race in F1, the other side of sustaining himself is a big ask. With Thailand being an untapped market, especially for F1 teams, it is working in his favour so far.

Ahead of the German GP, Toro Rosso announced two new sponsors from Thailand as they traveled to the Asian country for a public announcement. On Monday, they revealed Moose Craft Cider as their new sponsor, with Albon becoming its brand ambassador as well.

The logo will feature on the Toro Rosso car, the drivers’ overalls, as well as Albon’s race helmet from this weekend’s race. Assistant MD of Siam Winery Khun Varit Yoovidhya said: “Alex is the perfect role model for young Thai athletes having shown incredible persistence and determination throughout his, at times, challenging career.

“After successful years in Junior categories he got his F1 opportunity at Toro Rosso where he’s already impressed everyone with his talent, speed and character. The Moose brand stands for passion, being authentic and to follow our own path, all of which we feel is very much embodied by Alex and Toro Rosso.

“This partnership will also support our goal to significantly grow the cider market in Thailand and Asia and make Moose Craft Cider a leader in its field. Siam Winery, who owns the Moose Craft Cider brand, and Alex will work hand in hand with Thailand Sports Authority to send a very strong message about responsible drinking – Never Drink when you Drive.”

Team boss Tost said: “Moose Craft Cider is a famous Thai brand and we are very proud to work together. It’s fantastic to have a Thai company invest in the team and it’s a clear demonstration of Alex’s growing popularity in the country and the progress the team is making.

“Having a Thai partner in combination with Alex being a Thai driver makes total sense, and we hope we can gain many more Thai fans over the months to come. We are very impressed by the brand’s ambition.

“And we will give our best to support them to achieve their goal of not just growing the brand within and beyond Thailand, but also to encourage more young Thai drivers to follow in Alex’s footsteps. We look forward to working with Moose on some exciting initiatives in the future.”

At the same time, Albon added: “It’s a real honour to be a brand ambassador for Moose Craft Cider, a young and ambitious Thai brand that I can personally identify with. It also shows that F1 is growing in popularity in my home country Thailand, something that makes me incredibly proud and happy.”

A day later on Tuesday, Toro Rosso revealed PTT Lubricants as their new partner, with Albon becoming its brand ambassador as well. The logo is to be featured on both the cars and also the drivers’ overalls from German GP onward.

Jiraphon Kawswat, President & CEO of PTTOR, said: “We are proud to support Alex Albon, the sole Thai driver in this prestigious international competition. This collaboration is a part of our efforts to demonstrate the potential of the Thai people on the international stage.

“It’s also a historical opportunity for Thailand’s leading quality oil and lubricants brand to appear before the eyes of motorsport fans around the world. As our brand ambassador we wish Alex great success, and no matter the outcome of the competition he will be the winner in the hearts of Thai people everywhere.”

Toro Rosso Commercial Director, Matt Strachan, said: “We’re extremely happy to be working with PTTOR and PTT Lubricants and to be able to welcome another globally recognized Thai company to the team is fantastic news.

“Focussing specifically on its PTT Lubricants brand, we’re already developing some exciting initiatives to support their ambitious plans and help grow the sport in Thailand and South East Asia. Alex has proudly represented PTTOR in the past and will be a huge asset for them moving forwards.”

And Albon added: “I’m really grateful to PTTOR and PTT Lubricants and look forward to representing them around the world.  To be able to count on their support moving forwards is really significant and I’m relishing the chance to work closely with them in the future. I’m incredibly honoured and happy to welcome PTTOR to the Toro Rosso family.”