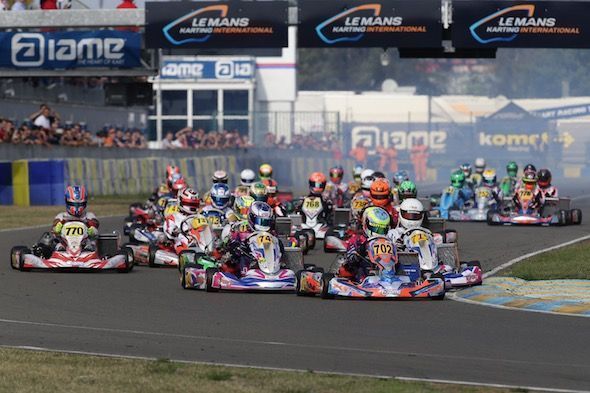 In the Pre-Final race, Bale had already won from Nicolas Rohrbasser (Spirit Karting). Both riders took advantage of mechanical problems for the poleman Frederic Op De Beeck (SFP) in warm up lap. The Belgian started the race in last position and lost all victory chances.

In Final race, the development was similar and another victory contender was out again before the beginning of the race. At that time was Thierry Delre, third in Pre-Final and one of the drivers with more pace, who was forced to start in last position due a mechanical problem in warm up lap.

Thomas Bale and Nicolas Rohrbasser, the two main favourites after Pre-Final, had a good start from first row. The British tried to escape, but the Swiss didn’t allow him to open so much gap as in Pre-Final race.

An ambitious Sten Piirimagi also wanted to join victory battle. The Estonian Eurokarting’s rider lost a few meters when Bale and Rohrbasser increased the pace, but when the race was stabilized, he caught them again and even could to overtake Rohrbasser in some stages of the race.

Behind them, Op De Beeck was forced to retire. The belgian, who was the best in qualifying heats on Saturday, had been recovered positions and had chances to fight for top 5 , but he had mechanical problems again. Meanwhile Delre was doing a spectacular comeback and in the middle of the race he was already sixteenth.

When the race reached the decisive point, two consecutive fastest laps from Bale gave him a definitive gap to win the race. The British showed his superiority and led all the laps, both Pre-Final and Final races.

Rohrbasser won the second-place battle with Piirimagi and repeated his Pre-Final position. The Estonian was third, from Prassetyo Hardja (Stratos Motorsport) and Cristof Huibers (DFK), who completed the Top 5. Thierry Delre was finally 12th.