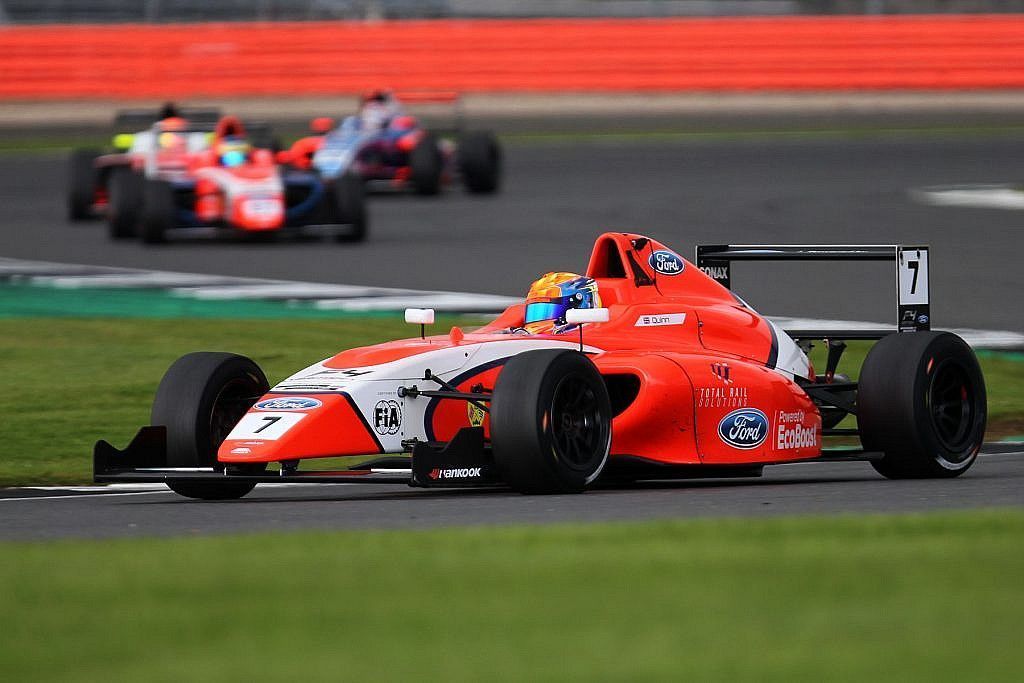 TRS Arden and Alex Quinn shone at Silverstone to take victory in Round 25 of the F4 British Championship certified by FIA – powered by Ford EcoBoost, ahead of Oliver York and Oscar Piastri after a dramatic finish hit by torrential rain.

Silverstone has proved a happy hunting ground for Quinn. It was the scene of his British F4 Rookie title triumph in 2016, which he capped off with a fantastic win at the Northamptonshire circuit.

Starting on the front row the Cornish racer was determined to add another victory to his name at the home of British Motor Racing and he duly delivered. A lightning start saw him get the jump on team-mate and poleman Oscar Piastri.

Piastri made life difficult for Quinn in the opening stages, refusing to let him escape while bringing Oliver York (Fortec Motorsports) and Jamie Caroline  with him. Caroline having already made up two places on the first lap.

As the race progressed Quinn eventually managed to break free of Piastri’s clutches. There was as the heavens opened with just two laps remaining, but Quinn remained unfazed out front. The 16-year-old danced his way around the 1.64 mile circuit on slick tyres in the pouring rain to take his third win of the campaign.

Behind Quinn the situation was far less straightforward. After Caroline got the better of York with a bold move to take third just before the rain began to fall, the championship leader moved to double his fun as he attempted to pass and pull away from chief title rival Piastri.

It resulted in a spin for Caroline, forcing Piastri to take evasive action. The Aussie took a wide line and hit the brakes. York promptly capitalised to take second, diving up the inside of both of drivers.

A below-par qualifying for Double R Racing’s Linus Lundqvist and TRS Arden’s Ayrton Simmons meant the stage was set for them to come storming through the field from 15th and 11th respectively. Both took no prisoners as they flew up the order, each making up four places on just the opening lap. The duo put on a display of overtaking that was a feast for the eyes, with Simmons finishing fifth and Lundqvist sixth. Simmons recording fastest lap of the race in the process.

Team-mate Hampus Ericsson had to settle for ninth despite a spell in sixth, but with Falcon Motorsport’s Lucca Allen and TRS Arden’s Olli Caldwell in 14th and 17threspectively, Ericsson secured his seventh Ford F4 Challenge Cup win. It leaves him tied with Oliver York for most wins in the Class this season.

Carlin’s Patrik Pasma completed the top 10 ahead of Double R’s Karl Massaad. Meanwhile JHR Developments driver Harry Dyson put on a fine display on his competitive single-seater debut, picking his way expertly through the field from last on the grid to finish 12th.

However, Jamie Caroline will have other ideas and can take the title tomorrow if he has increased his championship lead from 71.5 to at least 75 points once the chequered flag falls on the final race.