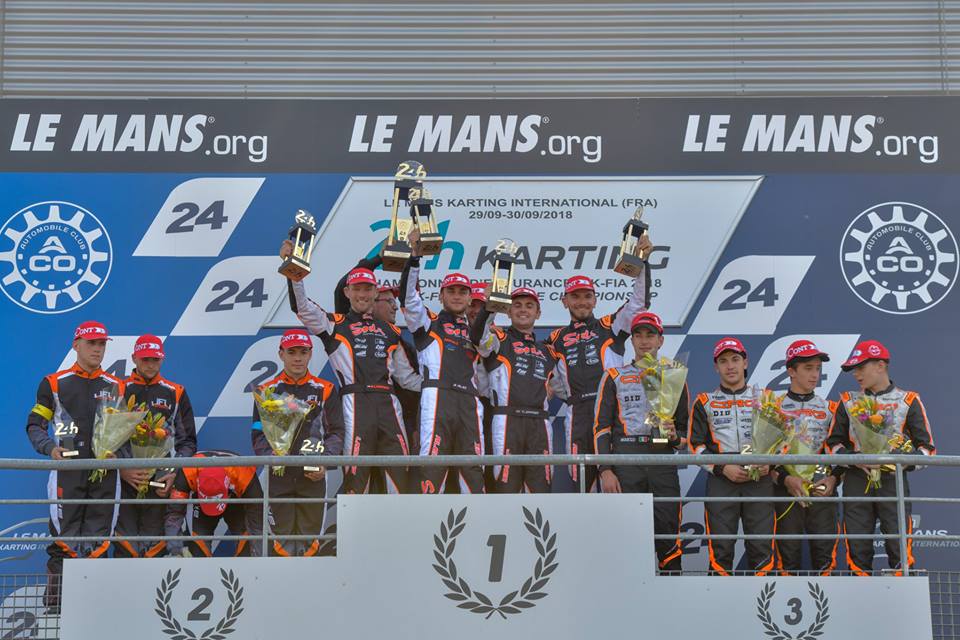 In its third year, the FIA ​​Karting Endurance Champion title was won by a factory team, that of the French manufacturer Sodikart, while the official CRG SpA team was once again on the podium. At Le Mans, the 33rd edition of the 24 Hours Karting also confirmed the internationalisation of this Competition at the same time as it affirmed the potential and the attraction of OK engines.

The 24 Hours of Karting, the leading endurance Competition, had to contend with the 1384 metres of the Le Mans Karting International Circuit on 29th and 30th September 2018. The involvement and reputation of the Automobile Club de l’Ouest (ACO) in this area has nothing more to prove. The strong collaboration between the ACO and the CIK-FIA has ensured good progress for the FIA ​​Karting Endurance Championship and a positive image of the discipline. The first victory of a factory team opens the way for new challenges from manufacturers who had previously delayed their arrival in Endurance. In terms of engines, TM Racing used its experience from last year to come up with strong attributes to win against their only rival, Vortex, represented by private teams.

Equipped with LeCont tyres, there were 13 GP1 karts this year among the 32 entries in the 24 Hours Karting. The power and reliability of the OK engines largely contributed in the increase in the proportion of GP1 karts among the competitors as well as providing a superb show on the track.

The Competition was very intense with many twists and turns. Although the rain was noticeable by its absence, the cold of the night made the race difficult for every participant. Drivers and machines were put to the test, confirming that the preparation for such a race should leave nothing to chance. Beyond the pure performances of each team, often the technical hazards and their resolution shaped the hierarchy.

After the Qualifying phases, the Competition started strongly from the start given on Saturday, 29th September at 3:00 PM sharp as is the tradition. Several teams took turns in the lead in the early hours of the race. One of them, JFJ Performance (Sodi / Vortex / LeCont) took control convincingly shortly before midnight. At that time, Sodikart (Sodi / TM Racing / LeCont) remained in 2nd position followed closely by the other factory team, CRG SpA (CRG / TM Racing / LeCont). The night was accompanied by many mechanical mishaps that constantly changed the positions. CRG SpA was struggling with Wintec Chambord (Tony Kart / Vortex / LeCont), before recovering 3rd place several laps from the leaders. Despite all his efforts, Sodikart could not get closer than a lap to JFJ Performance because of several minor concerns.

An hour and 30 minutes from the finish, it was the turn of the leader to encounter a problem, having led without interruption for nearly 900 laps. A simple chain break that occurred far from the pits delayed the kart and allowed Sodikart, until now in ambush, to take the lead. The factory Sodi team was able to finish as a strong winner with a lap in the lead having completed 1504 laps, more than 2000 km. A private team, victorious in the lower category in 2017, JFJ Performance however achieved a great feat in its first participation in GP1. Always very fast, but subject to many problems, CRG SpA was on the 3rd step of the podium, 11 laps behind the leader. The team La Manche KartMag (Tony Kart / Vortex / LeCont) came back to 4th place, followed by Cormeilles-KMD (Sodi / Vortex / LeCont).