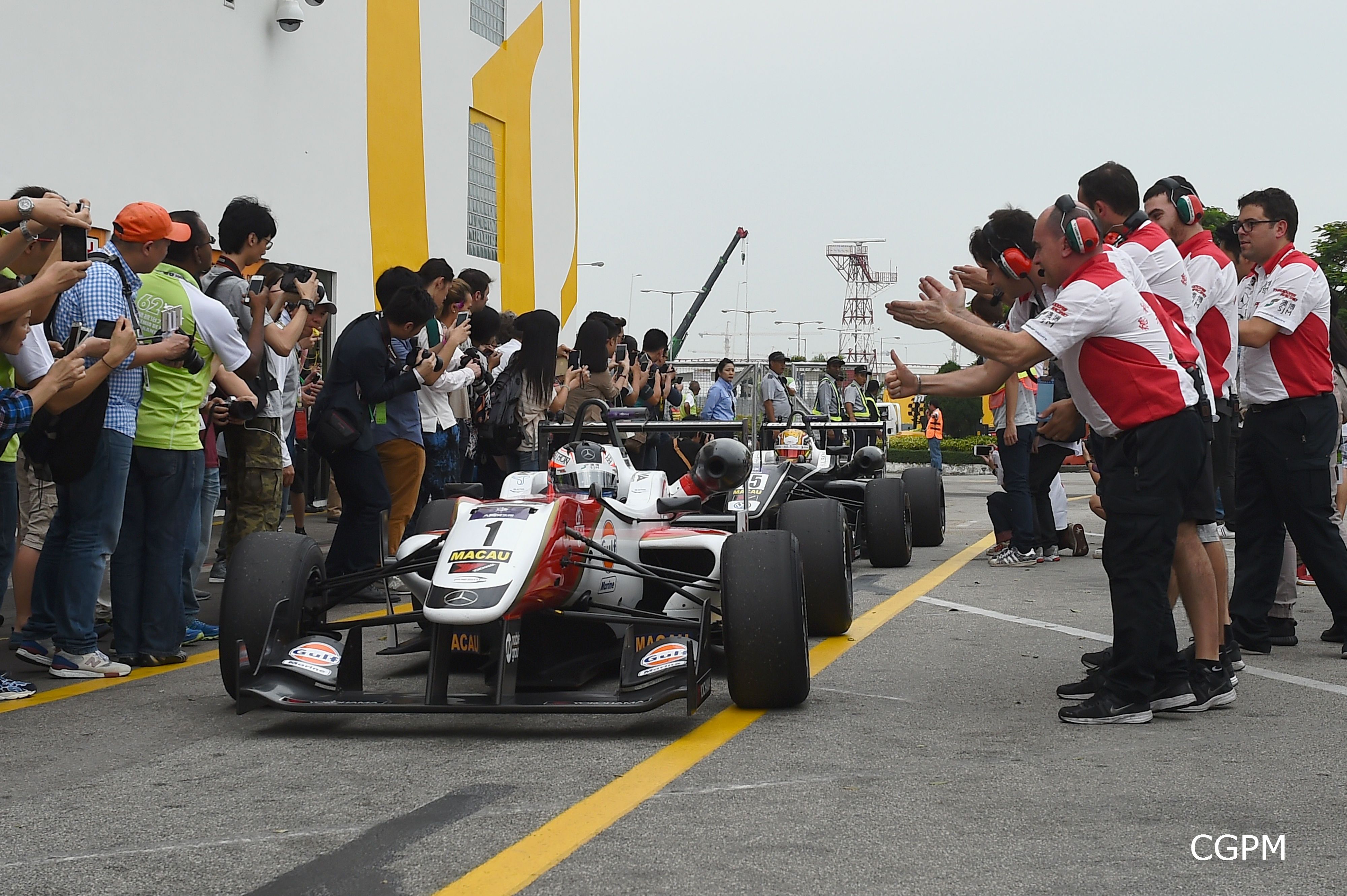 The Swedish driver Felix Rosenqvist (SJM Theodore Racing by Prema Powerteam) gets the victory in the 62nd edition of the Macau Grand Prix ahead of Charles Leclerc (Van Amersfoort Racing) and Alexander Sims (Double R Racing).

The grid is already formed. In pole position is Felix Rosenqvist, who won the European Formula 3 Championship, who had been victorious in the qualifying race and who had achieved the historical record of the track in one lap with a 1:10.330 time. In second place, we find a young driver from Monaco, Charles Leclerc, rookie of the year in the European Formula 3 Championship. In third place we see Alexander Sims. To find the penalised Antonio Giovinazzi, we should go down to the tenth position on the grid.

The formation lap begins. The engine revolutions increase, tire temperatures soar after the last burnouts before being placed in the start box, heart beats go upwards. And finally the lights go out. Finally the sixty-second edition of the Macau Grand Prix starts.

Good start for the drivers who started from the front row of the grid. Leclerc is placed in Rosenqvist‘s slipstream and he overtakes the Swede in Lisboa corner. First lap without any incident on the streets of the small town of Macau. When the drivers crosses the start/finish line, Rosenqvist is only a few centimetres from Leclerc‘s diffuser and finally he overtakes the Monegasque driver in Reservoir, the first corner of the circuit traced to the left and it’s a flat out corner. In contrast, Leclerc still has all the fast part of the track and stays glued to Prema car of Rosenqvist, and he repeats, in a very risky maneuver, the same action as in the first lap. He overtakes Rosenqvist using the slipstream on the outside in Lisboa.

In the second lap a multiple accident happened at Fisherman’ Bend, causing the first and the only one red flag of the race. The track is full of debris of carbon fibre composite material and the other cars are going directly to the pit lane. Great staff effectiveness in the Macau circuit, getting quick clean the entire area of ??the accident to resume the race as soon as possible.

After cleaning the entire last section of this street circuit, the cars back out on track led by the safety car. The safety car lights are off and it heads to the pit lane, and finally the race was restarted at 8:55 Spanish time.

In this restart, Charles Leclerc not only lost the first position at the first corner, he drops to third place. The current situation at the fifth lap is: Rosenqvist first, followed by Macleod, Leclerc, Sims and Giovinazzi, who had managed to climb from tenth to fifth place.

On lap number six, Antonio Giovinazzi continues its climb to the top positions and he gets the fastest lap of the race. Just one lap later, we found Leclerc in the slipstream of Macleod car , who gets forward in a very similar maneuver to the previously completed with Rosenqvist, made in Lisboa Bend on the outside. At that time, Charles Leclerc is 2.2 seconds from Felix Rosenqvist car heading the race.

On lap eight, Macleod loses control of his car at the Esses da Solidão section and thanks to a correction in time, this event does not end in an accident in that area of ??the circuit, but nevertheless, the British driver touched the tire barriers and falling to the last positions of the field.

From this moment, the situation has been stabilized. Rosenqvist begins a series of fastest laps, and in one of them he beat the historical record of fastest lap in race with a 2:10.425 time.

We reached the end of the race and Felix Rosenqvist is the first to see the chequered flag. He is followed by Leclerc, who had managed to cut back some time in the last two laps to pass just 1.168 seconds from the 2015 Macau Grand Prix champion. They are accompanied on the podium by the British driver Alexander Sims. Behind them, Giovinazzi crosses the finish line in a creditable fourth place, followed by Markus Pommer, Santino Ferrucci, Alessio Lorandi, Lance Stroll, Jake Dennis and Arjun Maini, completing the top 10.