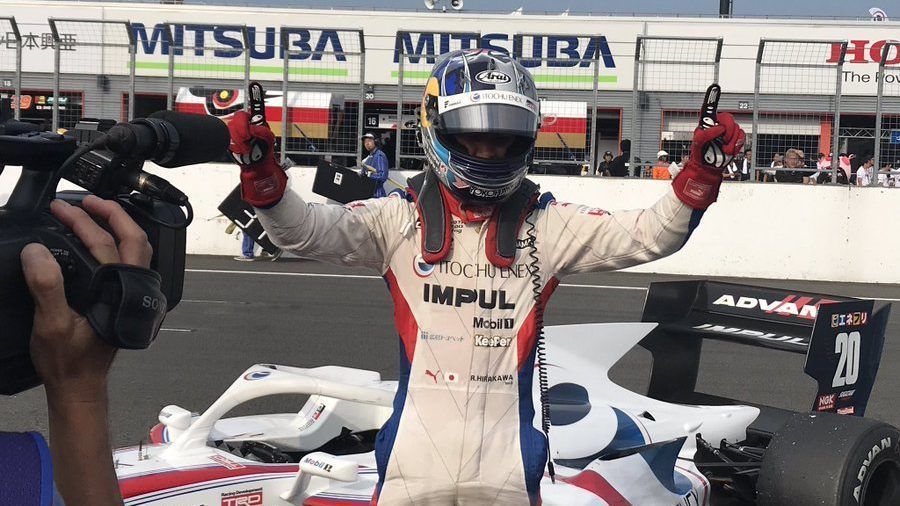 It was already disaster for former points leader and Dandelion Racing Honda’s Naoki Yamamoto, whose car did not start which forced him to start the Motegi Super Formula race from the pit lane.

The start though was delayed by five further minutes after Tean Mugen Honda’s Patricio O’Ward positioned him wrongly on the grid. The race distance was reduced to 51 laps because of the delays.

When it got going eventually, pole-sitter and Nakajima Racing Honda’s Alex Palou kept his first place intact ahead of Hirakawa and Dandelion Racing Honda’s Nirei Fukuzumi. There were drivers opting for an early stop.

At the same time, Kondo Racing Honda’s Yuji Kunimoto was already up to sixth after starting 15th as new points leader Cassidy, who started from 12th, lost places before stopping on Lap 4 to put soft tires.

Nakajima Racing Honda’s Tadasuke Makino fell to last position after facing issues on Lap 7, where his car had to be re-started. Teammate Palou started to come under pressure from Hirakawa though.

The Japanese though finally made it stick in the final corner and created a solid gap from the chasers as the leaders decided to go long in their first sting. This benefited Hirakawa as he had tyre advantage.

Yamamoto, meanwhile, gradually started to make inroads. While Hirakawa led Palou, the fight for third intensified with Kobayashi closing in on Fukuzumi. On Lap 33, he eventually made the move stick to take third.

The Japanese had second in mind as a late stop on Lap 42 allowed him to get ahead of Palou in second, with Hirakawa comfortably ahead after stopping on Lap 38. Fukuzumi then lost to Cassidy in the pits.

The closing stages had Hirakawa being reeled in by Kobayashi but the former had enough in the end to secure his first Super Formula career victory, with the latter having to settle for second.

Cassidy, meanwhile, passed Palou to be third with five laps remaining, which helped him to one point lead over Yamamoto after the latter could only manage ninth, missing points finish by one place.

Even though he lost the podium, Palou did well to be fourth from Fukuzumi as Sekguchi’s last lap retirement helped Ishiura to be sixth with Auer seventh and Team Mugen Honda’s Tomoki Nojiri score the final point.

Ishiura passed Auer in the closing stages to have track position as Kunimoto rounded out the Top 10. Among others, Markelov was 12th with O’Ward ending up 14th for the second time in a row.