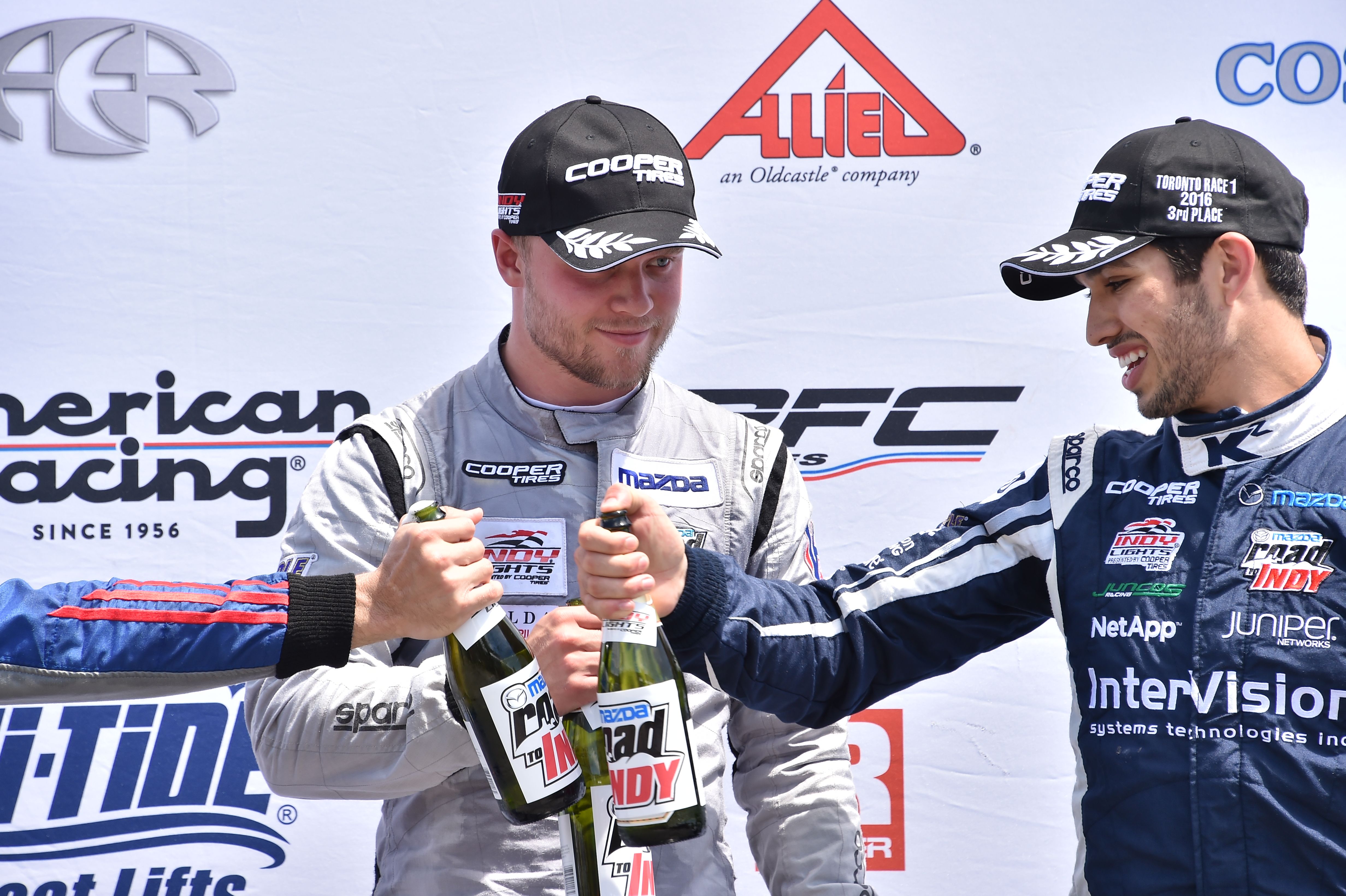 Sweden’s Felix Rosenqvist had been forced to skip the three most recent Indy Lights Presented by Cooper Tires races but he returned with a vengeance on the bumpy and challenging street course around Exhibition Place this afternoon to claim a comfortable win in the Cooper Tires Indy Lights Grand Prix of Toronto. The victory was his second during an impressive rookie campaign in North America and the third this season for Belardi Auto Racing.

Felix Serralles, who won one week ago at Iowa Speedway, finished second for the Carlin team, while Kyle Kaiser snatched third on the final lap from Rosenqvist’s teammate Zach Veach, who then lost fourth a few corners later when he abruptly lost control and crashed in Turn 10.

As the only driver ever to have won the prestigious end-of-season Macau Grand Prix Formula 3 race more than once, Rosenqvist, 24, was always likely to be favored on his Indy Lights return in Toronto after his European sports car commitments forced him to miss the events at Road America and Iowa. He duly set the pace in the first practice on Friday, repeated the feat to claim his second pole this morning (the first came in March when he romped to victory in Round Two at St. Petersburg, Fla.), then took off confidently into the lead at the start.

A series of fastest laps allowed the Swede to open up a lead of 2.6 seconds inside the first eight laps over teammate Veach, who qualified fourth but took full advantage of title rivals Santi Urrutia (Schmidt Peterson Motorsports with Curb-Agajanian) and Serralles, who went wheel-to-wheel for second place into Turn One and, consequently, both lost momentum on the exit onto Lake Shore Boulevard.

Urrutia followed in third for the first seven laps before intense pressure from Serralles paid off and he made a nice pass for third position under braking for Turn One. Serralles then improved the fastest lap of the race on consecutive trips around the 1.786-mile, 11 turn track as he closed quickly on Veach.

The margins between the top three were erased by the advent of a full-course caution when Colombian Juan Piedrahita (Team Pelfrey) was involved in a frightening accident at Turn Three when he collided with Dean Stoneman’s Andretti Autosport Dallara-Mazda in the braking area, then slammed into the side of the unsuspecting Zachary Claman De Melo (Juncos Racing). Stoneman, incredibly, was able to continue. The other two were not, although thankfully they emerged unscathed.

After another brief caution when Neil Alberico’s misfortunes continued with an incident in Turn Two, Rosenqvist took off again in the lead.

Behind, Serralles moved up to second with an opportunistic move around the outside of Veach in Turn Three, but any hopes of challenging for the victory were extinguished by the race leader, who reposted fastest lap before romping away to victory by 7.3433-seconds over Serralles.

Kaiser, who had started seventh, overtook Urrutia for fourth place on lap 22, then quickly closed in on Veach before making his move for third place at Turn Three on the very last lap. The unfortunate Veach, who was struggling with a bent rear upright after earlier clipping one of the unforgiving walls, crashed out just two corners from the finish line, which elevated Urrutia to fourth ahead of Stoneman and an uncharacteristically quiet Ed Jones (Carlin). The championship leader admitted to not feeling comfortable on the tricky street circuit and had his work cut out to fend off Grimsby, Ont.’s Garett Grist (Team Pelfrey).

Jones still leads the championship by 251 to 230 over Stoneman, with Urrutia and Serralles just five and six points further adrift, respectively, heading into tomorrow’s 45-lap or 60 minute 13th round of the 18-race championship which will start at 11:20 a.m.

Felix Rosenqvist (#14 Karlsson Svensson Projekt/Belardi Auto Racing): “I was actually a bit nervous, getting back into the car at such a difficult circuit. But after five or six laps I was right back into it, just like I was at St. Pete. Taking a win here was my goal but I knew it would be really hard to pull off, so this feels really good. The race was just about controlling and being awake on the restarts. The Belardi team gave me a great car, which is a big part of it. This track is hard, there is no corner that’s comfortable so you just have to go with it. I have experience on these sorts of tracks, where you’re jumping around all the time, so I put that to good use.”