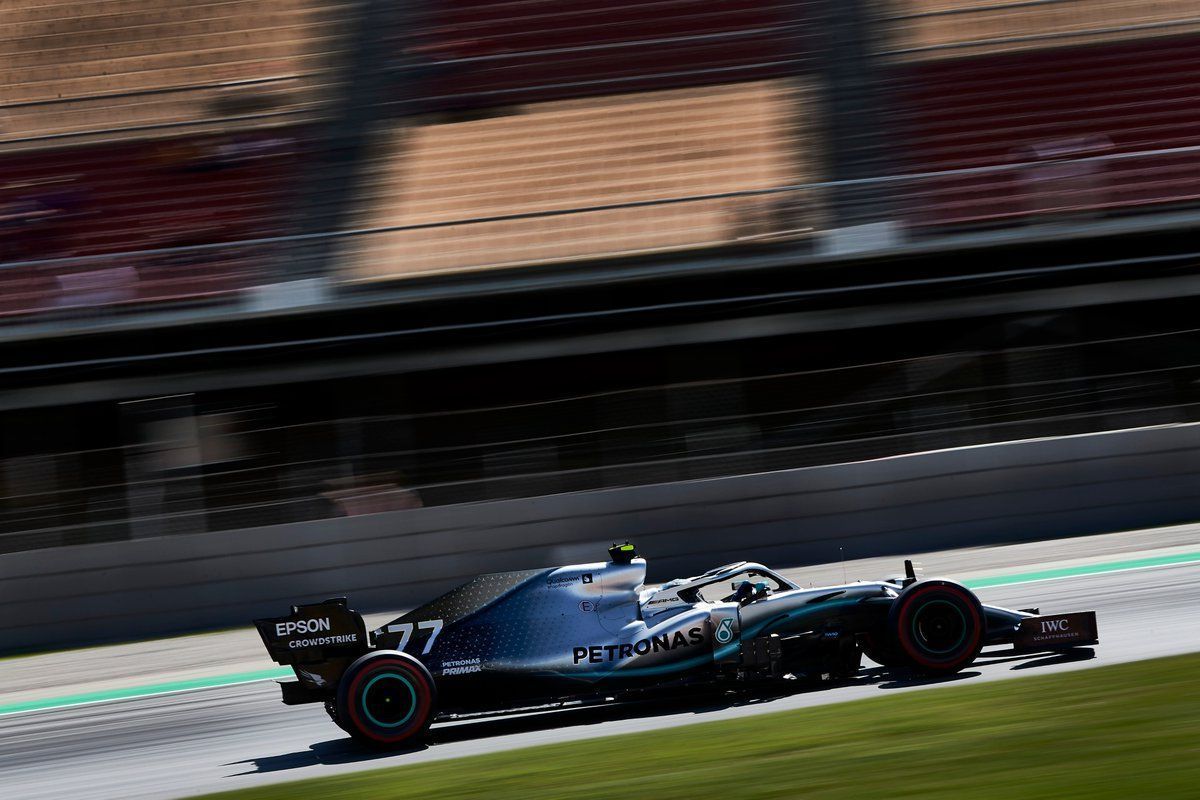 It was a straightforward Friday in F1 Spanish GP weekend as Mercedes set the pace against Ferrari, while the midfield had some dramas.

While Ferrari had a brand new power unit fitted to its cars, subtle upgrades from Mercedes helped the German manufacturer stay ahead of its Italian rivals after Friday at Circuit de Catalunya, Barcelona with Mercedes Valtteri Bottas topping both the sessions.

The Finn looked solid all day along and much better than Lewis Hamilton. The British racer picked up pace in FP2 but he generally comes alive on Saturday more. Ferrari weren’t too far off but the gap is still there – although F1 qualifying should show more.

“It’s always an interesting day when you’re bringing new parts to the car to get a feel for it and see if they bring the performance they should,” said Bottas. “The car felt really good, completely different to how it was in winter testing.

“And it seems like our cornering performance has improved. The balance around the lap is also better, so it looks like we’ve taken the right direction since the winter. It’s only Friday and Ferrari are very close. It feels like we’ve made a good step forward, but we need to wait and see.”

Bottas had a scare of an oil leak towards the end of FP1 but it wasn’t a major issue as Hamilton concurred to the Finn’s sentiment regarding Mercedes upgrades. On the other hand, Ferrari F1 drivers were slightly subdued in their reactions.

While they praised the upgrades but were cautious of it performing to its 100 percent yet. “As far as the aerodynamic and engine updates are concerned, I’d say we can be pleased with them,” said Vettel. “But it’s only Friday.

“The true order of the teams will be only be seen in qualifying. I’d say we are not yet where we’d want to be, especially in the slowest corner and so I think we still have quite a bit of work ahead of us to be ready for qualifying and the race.”

While Red Bull Racing‘s Max Verstappen seemed close to Mercedes and Ferrari but the Dutchman did not have a clean run. An oil leak in FP1 forced Honda to change the power unit before FP2 – the thing which they were to do after the second session.

Even though the pace was there but Verstappen felt slight uneasiness, especially with the set-up. His teammate Pierre Gasly was in the Top 10 but behind the Dutchman after he had some mistakes. He found himself in a Haas F1 sandwich, in fact.

The American team – who are trying to find answers to their tyre issues – looked in a good shape as usual on the Friday with Romain Grosjean running all the upgrades. Despite not having them, Kevin Magnussen wasn’t too far off the Frenchman.

“I think both our cars behaved really well,” said Grosjean. “We got the tyres working, had some pace, so it was much more fun in the car. We’re still evaluating everything with the package, we can probably find a bit more from it.

“It’s always tricky when you get a new one to find the right set-up around it. I think the biggest thing was getting the tyres to work, it just wasn’t the same car. I could actually enjoy driving it, I knew what I was going to get.

“The tyres were gripping, they weren’t sliding and going away and destroying themselves. It was a big difference. It’s a bit of a shame we’ve got to put in so much effort for a piece of rubber, but clearly it shows where we need to improve.

“We need to do more, especially for Monaco and Canada, but coming back here and being able to enjoy two good sessions, it shows that the problem has not been our chassis, it’s related to tyre usage. It’s been a positive day, I’ve enjoyed driving the car.”

Their direct competitors Renault though looked out of touch, finishing outside the Top 10. While Nico Hulkenberg said he had nothing special to report as most of the time was spent chasing perfect balance and set-up. Daniel Ricciardo was more upbeat through.

The Australian said they need to check why they couldn’t show the pace on one lap but their race pace seemed better placed. It was something similar at Racing Point F1 where Sergio Perez struggled mostly while Lance Stroll had to recover from the crash.

The Canadian shrugged off the incident as he returned to the circuit late and still managed to beat Perez. The Mexican felt they were all over the place as he said he had pace at one stage but it was lost on the next lap, terming it as an ‘up and down’ run.

Alfa Romeo Racing‘s Kimi Raikkonen had similar feelings as the Finn suggests that there is a lot to do for the team. At the same time, at the back, Williams ran a swap where George Russell drove Robert Kubica‘s chassis and the Polish had the Brit’s.

Russell revealed that Kubica was due to have a new one as he took the one which he used in Baku, while the Brit took the Pole’s chassis from the first four races. They were closer to the other teams than expected, as Russell was only 0.743s off Perez in FP2.

Over at McLaren and Toro Rosso, it seemed like a steady approach to the day as they ran as much to collect data and understand if the upgrades work to the fullest or not. There were no major dramas on their side as such.

Spanish GP: Bottas keeps Mercedes on top in FP2 as he leads Hamilton