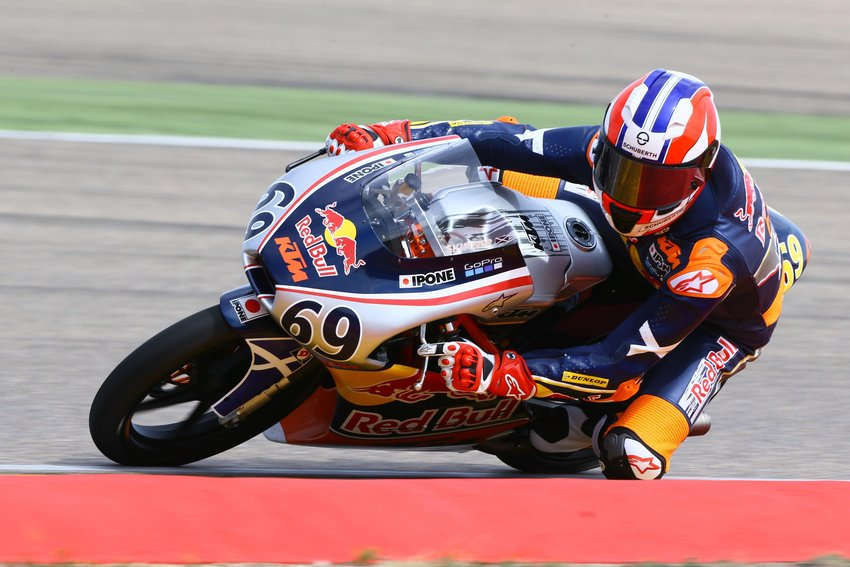 Red Bull Rookies Cup has started today with first race in Jerez. After many incidents and an early ending due to a red flag, Rory Skinner has won ahead of Ai Ogura and Kazuki Masaki.

Race started and Ai Ogura was able to defend his Pole Position. Behind him, there was a multiple crash in which Can Oncu, Deniz Oncu, Ryusei Yamanaka and Victor Steeman were involved. Before the first lap ended, Adrián Carrasco also crashed and Aleix Viu took lead.

In lap 4, Rory Skinner was leading and trying to open a gap. Walid Soppe was the only one who seemed to be able to follow him, while the rest of the group were losing pace. However, Ogura and Viu caught Soppe, and the Japanese moved into second place and started closing the gap to Skinner.

With half race already completed, Skinner and Ogura were on the fight for the win, with Viu, Kazuki Masaki, Filip Salac and Soppe battling for third place. With four laps to go, Masaki and Salac pulled away and tried to open a gap to Viu, who was able to avoid it.

On the last lap, Ogura and Suzuki were already swapping places. Behind them, Masaki and Soppe had a crash and the Dutch rider was laying in a dangerous place, so the race had to be red-flagged and finished. Results were determined by lap 14 and Skinner won the race with Ogura second and Masaki third. These drivers are, obviously, leading the championship with 25, 20 and 16 points respectively.

Second race of the season is set to be held tomorrow at 15:30 local time.