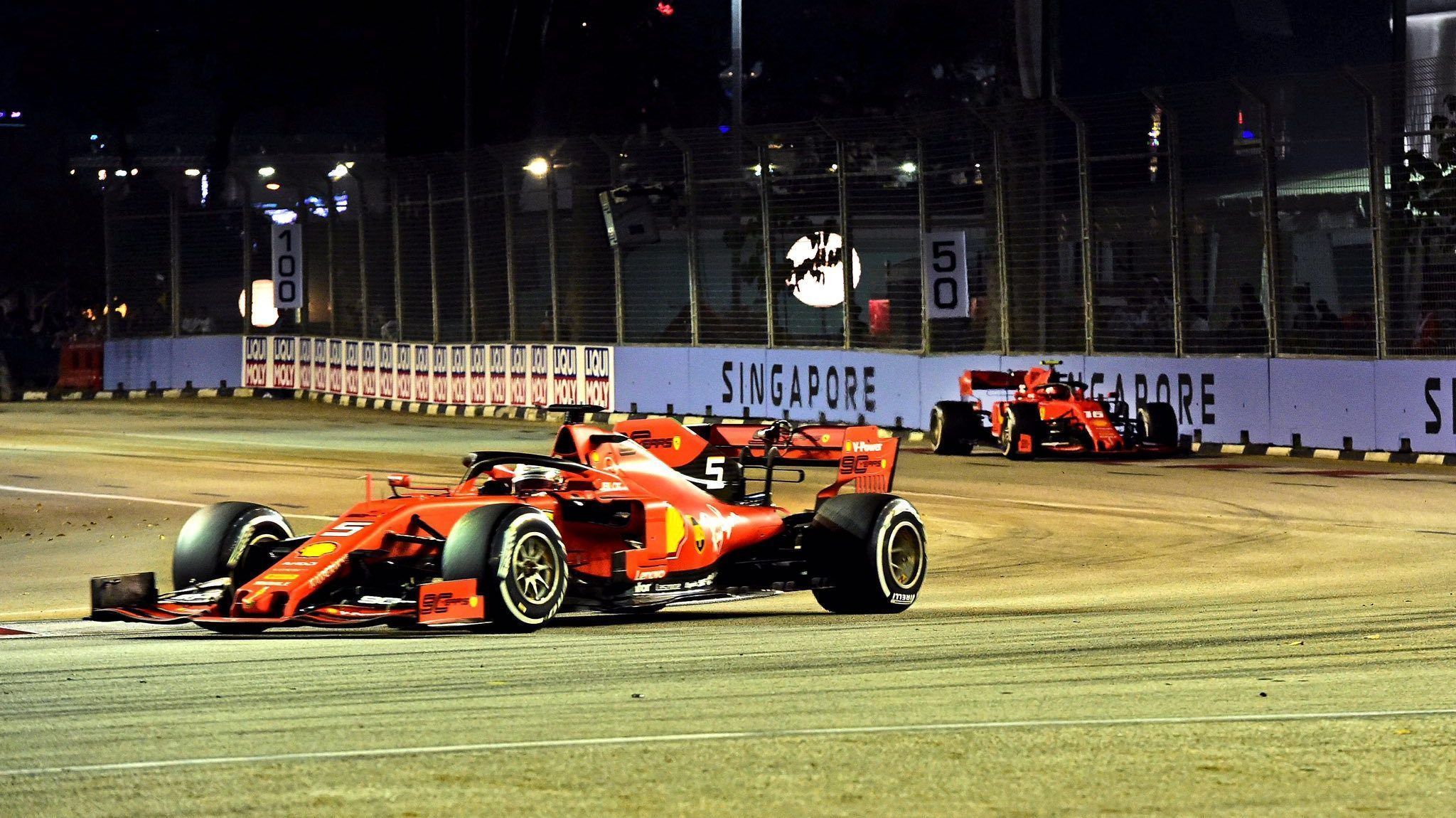 Pole-sitter and Ferrari’s Charles Leclerc had a good start under the lights in F1 Singapore at Marina Bay Circuit with Mercedes’ Lewis Hamilton holding second from the other Ferrari of Sebastian Vettel.

Sainz was off the racing line when Hulkenberg tried a move but they touched. McLaren’s Lando Norris was best of the rest in seventh with Alfa Romeo Racing’s Antonio Giovinazzi eighth.

Haas’ Kevin Magnussen climbed up to ninth with Toro Rosso’s Pierre Gasly in 10th. There was also contact for Renault’s Daniel Ricciardo and Williams’ George Russell but there wasn’t much damage done.

At the same time, Haas’ Romain Grosjean went off at Turn 1 before re-joining. The race turned into a strategy battle with Ferrari blinking the first with Vettel as the German had the undercut worked out.

That certainly did not sit well with Leclerc as the Monegasque was behind with Verstappen slotting in third over the Mercedes pair with Hamilton ahead of Bottas after a late stop for the German outfit.

Mercedes asked Bottas to slow the pace to not be ahead of Hamilton. While the leaders pitted, Giovinazzi was the race leader as he became the first driver to lead a full lap outside the Top 3 F1 teams.

The leaders had to push through the likes of Giovinazzi, Gasly, Racing Point’s Lance Stroll, Ricciardo with Hulkenberg and Norris behind. The Top 3 drivers eased past but Ricciardo and Giovinazzi collided.

The two were forced to pit for puncture. It was Vettel leading the Singapore GP ahead of an upset Leclerc with Verstappen, Hamilton, Bottas and Albon forming a train behind when a safety car was deployed.

Haas’ Grosjean collided with Williams’ Russell as the British racer retired immediately – his and the team’s first retirement of the 2019 F1 season. The incident is to be investigated after the race.

It was Vettel leading Leclerc and Verstappen still on re-start with drivers fighting for position outside the Top 10 as Gasly and Stroll went wheel banging in the left-hander. Not soon Stroll had a puncture.

Moments later, the other Racing Point of Sergio Perez was told to stop the car with an undisclosed issue as the safety car deployed again. The re-start was clean at the front with Leclerc voicing his frustration still.

There were changes at the back with Hulkenberg moving up to ninth while teammate Ricciardo fell back after a near hit with Toro Rosso’s Daniil Kvyat. Raikkonen lost places as well with Magnussen moving in the Top 10.

The Finn then had a collision with Kvyat at Turn 1 as the Russian tried a move. A third safety car was deployed to clear the car with Kvyat angry on the radio as he dropped down to 15th in the order.

The incident will be investigated after the race. Meanwhile, it was another clean re-start with Vettel leading Leclerc and Verstappen. With no further interruptions, it was only time for a Ferrari 1-2 finish.

Finally in 2019 after much critisicims, Vettel won the Singapore GP – his first F1 victory since the 2018 Belgium GP. It was also a first Ferrari 1-2 of 2019 as the Italian manufacturer made it three wins in a row.

Red Bull’s Verstappen rounded out the podium which featured no Mercedes driver as Hamilton could only manage fourth from Bottas and Albon. McLaren’s Norris ended up seventh with Toro Rosso’s Gasly eighth.

The Top 10 was rounded out by Renault’s Hulkenberg and Alfa Romeo’s Giovinazzi with Haas’ Grosjean missing out while fending off McLaren’s Sainz with Stroll, Ricciardo and Kvyat behind.

Williams’ Robert Kubica was 16th with Haas’ Magnussen in 17th after the Dane had plastic stuck in his car. DNF: Raikkonen, Perez, Russell.

UPDATE: Post-race, Giovinazzi was handed a 10-second penalty for driving too closely to the crane at Turn 8, while Grosjean/Russell and Kvyat/Raikkonen needed no further action as no one to be wholly blamed.

Giovinazzi, meanwhile, kept 10th still as he finished more than 10 seconds ahead of Grosjean, who had no tyres left towards the end of the race.