The Sepang-owned SIC Racing Team has taken up the place of Ducati satellite outfit Angel Nieto from the 2019 MotoGP season.

SIC Racing made its debut in the world championship in 2014, competing in the Moto2 and Moto3 series’ respectively. It will now make its full-time premier class debut from the 2019 MotoGP season onward.

The Angel Nieto outfit started its MotoGP journey under the Aspar name in 2010 and will complete its reign at the end of the 2018 season. Nieto’s Jorge ‘Aspar’ Martinez will assume the position of Sporting Director of the new outfit.

The joint statement stated: “Angel Nieto Racing Team (ANRT) and Sepang International Circuit (SIC) in principle have reached an agreement by which, from the 2019 MotoGP season, SIC will take over the two MotoGP class entries of the ANRT.

“Mr Jorge Martínez “Aspar” will assume the position as the Sporting Advisor to this new MotoGP Team.” The statement doesn’t include the bike which SIC Racing will run, but it is speculated that it will use the Yamaha M1.

Ever since Yamaha lost Tech 3 as its satellite outfit – which moves to KTM from 2019 – the Japanese manufacturer has been on the lookout for an outfit to run their bikes, when the rumours started to flow in about a Petronas-backed squad.

With the takeover, SIC Racing comes as a perfect bill. Marc VDS Honda’s Franco Morbidelli is one of the speculated riders to join, with Valentino Rossi praising his fellow Italian as a solid competitor. The other name linked to the seat is Honda’s Dani Pedrosa.

The Spaniard lost his Honda seat to Jorge Lorenzo for 2019. He was to announce his plans a couple of races ago but had to wait more. Two days back, he revealed that his decision has been made now and it will be announced during the German Grand Prix.

If Pedrosa and Morbidelli join the outfit, it will leave the current Angel Nieto riders Alvaro Bautista and Karel Abraham without a ride for the next season.

UPDATE: Following the announcement from SIC Racing and Angel Nieto, Japanese manufacturer Yamaha confirmed signing a MoU to provide its bikes to the Malaysian team in a three-year satellite deal.

It read: “Yamaha Motor Co., Ltd. is pleased to confirm the signing of a memorandum of understanding (MoU) with Sepang International Circuit. The MoU between Yamaha Motor Co., Ltd. and the Sepang International Circuit foresees the team leasing Yamaha YZR-M1 motorcycles for the 2019, 2020 and 2021 FIM MotoGP World Championship seasons as a satellite team.” 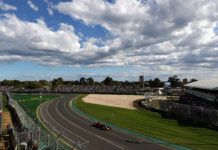 Australia cancels both F1 and MotoGP races for 2021 season