Only 6 days after the Indianapolis 500, the series was again racing. This time Marco Andretti (Andretti Herta Autosport) started from pole position. The American driver kept the lead at the start of the race ahead of Scott Dixon (Chip Ganssi Racing), Robert Wickens (Schmidt Peterson Motorsports) and Alexander Rossi (Andretti Autosport).

It was a clean start with no crashes despite some small contacts, as Indy 500 champion, Will Power (Team Penske) dropped from sixth to eight position.

Wickens was not able to keep podium position in the early stages of the race, been passed by Rossi and Takuma Sato (Rahal Letterman Lanigan Racing). The Canadian decided to pit early, like Josef Newgarden (Team Penske) did.

The battle for the lead of the race had a key importance in the pits. Andretti visited the pits on lap 22 while Dixon did the same two laps later, which allowed him to overtake the American for second position, because Hunter-Reay was leading due to his three pit-stop strategy. Andretti also lost another position with Graham Rahal (Rahal Letterman Lanigan Racing).

On lap 46, the first caution of the race came out caused by René Binder (Juncos Racing) who stopped his car on track and Rahal who crashed out.

Everyone joined the pits with “the yellow” on track. Dixon was in the lead ahead of Hunter-Reay, Andretti and Rossi.

Those four drivers quickly build a gap with the Ed Jones (Chip Ganassi Racing) who was running in fifth position.

Santino Ferrucci (Dale Coyne Racing) who made his debut in IndyCar in Detroit Saturday’s race, was touched by Charlie Kimball (Chip Ganassi Racing), making contact with the wall and causing the second and final Caution of the race.

At the re-start with 10 laps to go, Rossi overtook Andretti by the outside at turn number 4. This was the last move of the race as Dixon finally took his 42nd victory in the series and becomes the third drivers with most wins in IndyCar history.

In point’s championship, Rossi takes the lead with 276 points, 4 more than Scott Dixon and 7 more than Will Power. They are followed by Josef Newgarden and Ryan Hunter-Reay who have 21 and 49 points less.

“It’s always nice (to win). I think right now, with the competition in the Verizon IndyCar Series, it’s just through the roof. If you look back a few years, you can sort of run off five or six victories in a season, and it seems those days are pretty much gone. I’m super proud of everybody at Chip Ganassi Racing, and obviously PNC Bank’s first victory. Finishing third in Indy is nice, but really people only care about who wins at that place, so it’s always tough leaving Indianapolis unless you’ve won. But it’s always nice to rebound strong in Detroit. Honda has done a superb job, Top six for them here in the Motor City is a pretty big deal and congratulations to them. We’re going to come back and do it all again tomorrow. Would have been nice to celebrate a bit tonight.”

“I was doing qualifying laps there the whole time. Man, it was physical, just trying to qualify every single lap. Then at the end, with the restarts, kind of threw it off the rhythm there. I had trouble getting the tires clean, and kind of let (Scott) Dixon slip away there. I thought, the first couple laps after the green came out on the restart, I had something for him, but I just couldn’t keep the mid-corner speed on the far end of the track to keep up with him, to get close enough for the pass. Good job by the No. 28 DHL boys today in the pit lane again. They did an awesome job in Indy and again today, just phenomenal. Just came up a bit short today.”

“It’s great for Andretti Autosport to be 2-3-4, it’s great for the team. I think the No. 27 Ruoff Home Mortgage car had the capability to win, but for whatever reason, after pit stops, we just kept coming out behind a slower car and weren’t able to maximize clean air and fresh tire pace. With that being said, when the last restart happened, I knew we didn’t have the pace for the top two, so sometimes you’ve just got to be content with third. It’s great to be back on the podium, it’s great for the team after a very long month of May.” 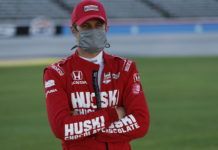 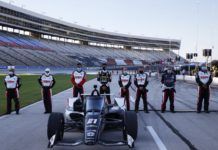