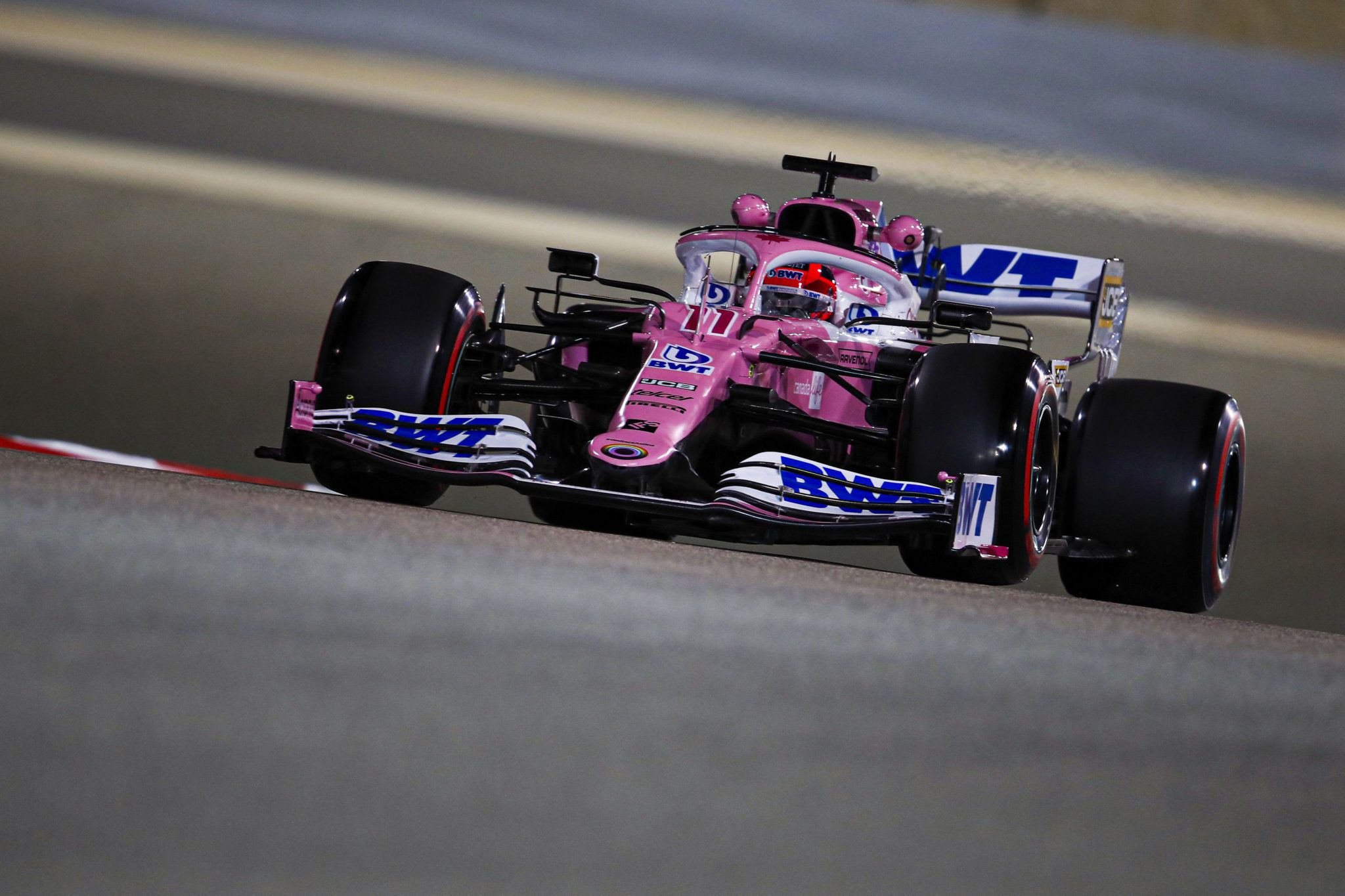 Racing Point had a 1-3 result as Sergio Perez took his first F1 win in Sakhir GP with Lance Stroll in third behind Renault’s Esteban Ocon.

It was a solid start to F1 Sakhir GP from Mercedes’ George Russell as he led the way after a scrappy few corners for Valtteri Bottas, which put the drivers behind him in a bother, especially Red Bull Racing’s Max Verstappen.

The Dutchman tried to pass Bottas but had Racing Point’s Sergio Perez on his left and Ferrari’s Charles Leclerc on his right. Approaching the Turn 4 sequence, Verstappen braked early allowing the Mexican and the Monegasque to go past him.

But the right-hander saw Leclerc try to take the inside line when Perez turned in as they both collided, taking Verstappen as well to bring out the safety car. While the Ferrari and the Red Bull driver retired, the Racing Point continued on to pit for a fresh tyre.

The safety car was deployed as Russell had it under control on re-start but Bottas got eaten up by McLaren’s Carlos Sainz for a brief period before the Finn retook the position. The Spaniard made the most of the Lap 1 to be third ahead of Renault’s Daniel Ricciardo.

While the re-start worked for Russell, it wasn’t the same for Vettel as he dropped outside the Top 10. Norris ran ninth until he was cleared by both Red Bull’s Alexander Albon and also Perez. The Mexican cleared the Thai for ninth then with a better pace.

Norris dived into the pits straight up to drop back in the field. At the front, though, Russell comfortably led Bottas with Sainz creating a good gap from Ricciardo and Kvyat. The Russian had Stroll and Gasly just behind with Ocon, Perez and Albon at a distant.

The pit stops started and the one to lose out was Ricciardo after Renault reacted late as he dropped behind Kvyat in the order. Going deep were the two Mercedes drivers along with Stroll, Ocon and Albon, with the Canadian on the soft compound.

He went until Lap 43 to switch to the medium tyres but he lost to Ocon, who pitted just a lap before for the hard compound. The Canadian came out in front but the Frenchman went wheel-to-wheel to take track position over the Racing Point driver.

Another to lose out in the pit was Albon, who stopped along with Perez but came out behind Norris. He got a black and white flag for track limits as well. AT the front, though, Russell build an even larger gap to Bottas after their stops.

Albon got ahead of Norris as other started to pit for the second time when a Virtual Safety Car was deployed for Williams’ Nicholas Latifi stopped at the track. The VSC caught out Sainz, Ricciardo and Kvyat as they lost track position to others.

It helped Perez, who made up two places on Stroll and Ocon to be third, with Albon in sixth. The pit stop from Sainz, dropped him to seventh with Ricciardo eighth from Kvyat and Gasly – the consolation for the Australian was a place on the Russian.

There was a second VSC period after Williams’ Jack Aitken spun in the final corner to lose his front wing. He pitted straightaway as it soon as the full safety car was deployed which wrecked the grand prix of Mercedes after a tyre mix up when double-stacking.

Russell was first in at a last minute and had the wrong tyres for him. They let him go as when Bottas came in, they understood the mix-up and put the right tyes on as he dropped to fourth in the order. They called Russell back in for another tyre change.

He dropped to fifth as Perez was leading the F1 Sakhir GP from Ocon and Stroll. Behind the Top 5, it was Sainz in sixth from Ricciardo, Kvyat, Gasly and Albon in the Top 10 with Norris just behind – the Thai racer had stopped for a fresh set of soft compound.

The re-start worked well for Perez as he led Ocon and Stroll, while Russell got through Bottas in couple of laps to be fourth. Mercedes noted that they put an old set of hard on the Finn’s car as the Brit passed both Stroll and Ocon to be second.

Also gaining two places was Albon as he passed both Gasly and Kvyat to be eighth. They all gained a place as Bottas started to struggle and dropped to ninth behind Kvyat. It was disaster more as a left-rear puncture for Russell forced him to pit again.

He dropped to 14th as Perez led Ocon, Stroll in the Top 3 from Sainz, Ricciardo, Albon, Kvyat, Bottas, Gasly and Norris in the Top 10. The stewards will be investigating the incident of Russell and Mercedes for putting the wrong tyres.

At the front, it was just a smooth run from Perez to score his first-ever F1 win in Sakhir GP by 10.518s over Ocon and Stroll, to make it a double Racing Point podium and also a first podium for the Frenchman – all three once part of the Silverstone-based outfit.

Stroll held on in the end ahead of Sainz, Ricciardo, Albon, Kvyat and Bottas as Russell fought back to ninth from Norris in the Top 10. This dropped Gasly out of points as he led Vettel, Alfa Romeo’s Antonio Giovinazzi & Kimi Raikkonen, Haas’ Kevin Magnussen, Aitken and Haas’ Pietro Fittipaldi.

UPDATE: The stewards handed a 3-place grid drop for Leclerc for Abu Dhabi GP as he was adjudged as the culprit for causing a collision. He also has two points on his superlicense. “The Stewards heard from the driver of Car 16 (Charles Leclerc), team representatives and have reviewed multiple angles of video evidence. Car 16 braked too late into Turn 4, locking the front right wheel and colliding with Car 11 which was taking the normal racing line into the corner,” stated the FIA.