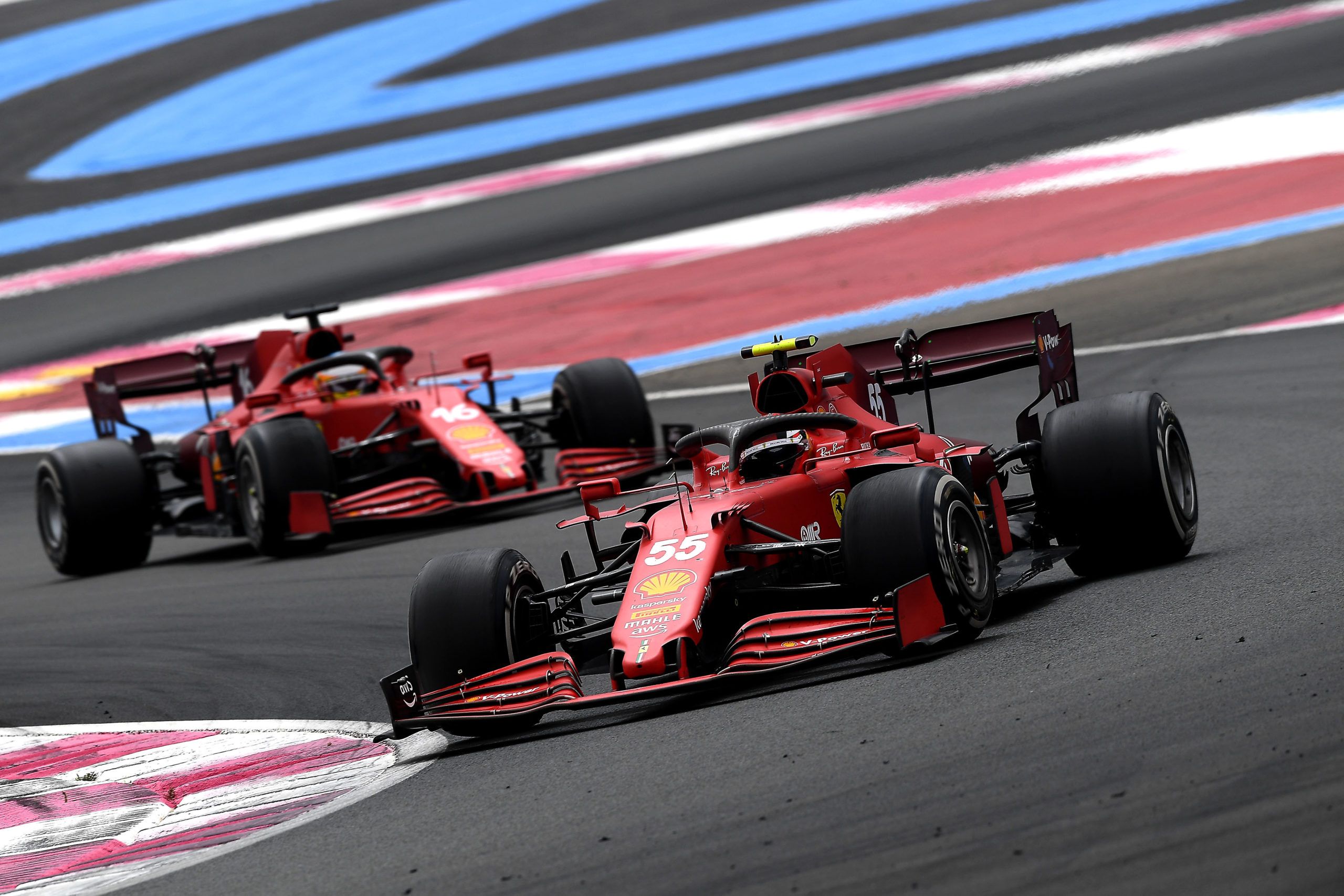 Carlos Sainz reveals that the tyre issues they faced in F1 French GP was something he saw already in Bahrain when he came into the team as they look for answers now.

Having looked good in qualifying, Ferrari went downhill in F1 French GP, with both Sainz and Charles Leclerc finishing outside the Top 10. The tyre wear for the Italian manufacturer was sky-high, much more than the most other teams on the grid.

Having looked good at the start of the stint, but it went off soon. Leclerc was the one to lose out heavy as he dropped from Top 5 to outside the Top 10. He opted for a two-stop, which put him further down, while Sainz remained on one-stop with not much in hand.

They lost third to McLaren after taking it in Baku, with the British F1 outfit ending up well in France in fifth and sixth. For Sainz, it was not a huge surprise when Ferrari started to feel the heat with their tyres, as the Spaniard saw the problem already in Bahrain.

It was his first time in the 2021 F1 car for Sainz and straightaway, he could sense the ‘narrow performance window’ issue. But he noted that they cannot complain about it now, but get on with it and lessen the troubles in the upcoming races.

“It is quite clear and evident that we must have done something really wrong to be so far off the pace,” said Sainz to media. “It is a limitation that has appeared in some of the races, where we really struggle with the front tyres, with graining and degradation, two times as much as our competitors.

“Cars on whom we were half a second quicker in qualifying like McLaren in France, or three times quicker, in the race, they were about two seconds faster per lap, so it is clear that we have a limitation with tyres, tyre management, with the way we operate the tyres. It is something that we will need to analyse, something we will need to try and get better through the season.

“It is also something that I felt immediately when I jumped in the car in Bahrain and I felt like that something was not quite right there, but now its time to get our head down and work around it because its clearly limiting on race day. It’s been a tendency, and I’m not going to lie. It’s something that it’s been in the back of our minds going a bit into every race.

“We know we tend to struggle a bit more in the races than in qualifying. But I must say that there’s also been a couple of weekends this year where this issue hasn’t appeared. For example, in Barcelona the race pace wasn’t an issue. It is also clear that we have a very narrow window of working range on our front tyres, so we tend to struggle a lot more with graining or with front wear than our competitors.

“So now it is about trying to understand why we have this such a narrow window, and why do we struggle more with this front tyre when compared to our competitors. I’m sure the whole team at the factory will be working extremely hard to try and address it because it’s evident, and it’s obvious. You don’t need to be a genius to see that we are clearly struggling,” summed up Sainz.

The sentiments were echoed by teammate Leclerc, who likely suffered more. For both the drivers, the changing conditions didn’t work as well. It rained at Paul Ricard on Saturday night and Sunday morning, something which Mattia Binotto noted as well, but like the drivers, the Ferrari chief added that it shouldn’t be an excuse.

“We have a very narrow window where we managed to make the tyres work,” said Leclerc. “Somehow it’s very difficult for us to always be in that particular window to make them work. In the race, we clearly didn’t manage to put them in that window and we just really struggled, especially with degradation from lap five, six of every stint we struggled more than others.”

There is no short-term solution for Ferrari, though, as Binotto addressed. They can work on medium-term picture. The Italian also added that the homologation of the wheel rims from last year, meant, they couldn’t work on it without having to use the tokens. This left them with little choice, as with the aerodynamic gains, the front tyres ended up getting over-heated more.

“Can we address it with a simple development on the current car? I think we may improve the situation but to solve it, I think we need to have some hardware change, like for example the rims, which is not possible due to the regulation,” said Binotto to written media. “I think it’s more important for us at that stage to try to understand and address it for next year.

“I think that this issue may happen again at some races, but not all tracks. It is track and weather conditions related, but we need to prepare ourselves to face such situations in the future and at least try to mitigate the problem, since it will happen again. Also, I don’t think the change in tyre pressures for this weekend, had any impact. If I look at the prescriptions, it has been raised only on the rear, and I think in the race we are having an issue at the front,” summed up Binotto.