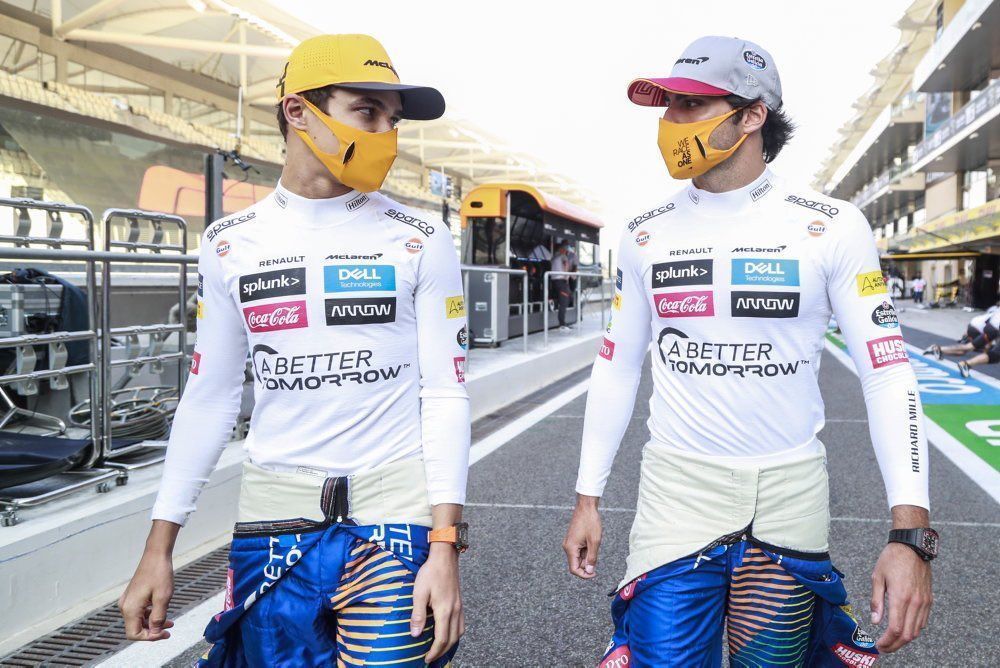 Carlos Sainz reflects on sound memories with McLaren F1 and an easygoing relation with Lando Norris as Zak Brown credits the Spaniard.

Through two years of fierce competition, Sainz and Norris have maintained a cordial relationship at McLaren, even drawing new fans towards the British outfit, with great support for the charismatic duo among the F1 fandom. Both joined the outfit in 2019, and as he heads off for Ferrari in 2021, the Spaniard has begun to reflect on his popular partnership with Brit. It was one, he says, that was “natural.”

“The big thing for me is that this came super natural since the first day I met Lando, I just got on well with him,” said Sainz to media including F1, Motorsport Network, Racefans.net, BBC and more. “And we kind of had this situation, we were super competitive. We’ve been super competitive on track and off track with any kind of activity we do.

“But at the same time, I guess we have a lot of respect for what we do. And we try and enjoy F1,” said Sainz, who noted that a collective appreciation for the sport was instrumental in the success of their relationship, both personally and professionally.

“F1 is the dream of many other drivers that have tried to achieve this in their career,” said Sainz. “We are two of the 20 guys that are currently racing in Formula One, and we are both trying to enjoy as much as we can this opportunity of this great sport, and we’re having fun while while doing it which is good fun. I’ve enjoyed it a lot.”

Norris thought that the positive relationship maintained between the two was vastly more productive than one driven solely by competitive spirit, though he insists that “fierce” competition still existed within the team. “I think we want to beat each other,” he began.

“And that’s what we love almost more than anything, is that competitive nature of what Carlos has, and what I have, because that’s what I’m here to do at the end of the day. But I think we just don’t make it any worse than it has to be.

“And I think we have the same desires, the same ambitions on the grid. And that’s to win races, and to win championships one day. I think in order to do so, in order to do that in this current time, our achievements are to help the team as much as possible.

“We do that by trying to push each other forward. And there’s been many weekends throughout this year, and also last year, when we haven’t had the third best car or the fourth or the fifth best car, but we’ve still finished in much higher positions than we should have done almost, because of how much we push each other and how much we push the team together.

“It’s just that when we’re off the track we’re laughing, we’re enjoying our time in the paddock. We’re enjoying our media activities, like Carlos said, and we’re just trying to enjoy our lives like normal people. So we don’t have to put on an act, or try to be any different to the people we are, it’s just we work hard, and we push each other on the track.

“And I think we’re still extremely competitive and fierce teammates within the team. It’s just when we’re outside of that, and when we don’t need to focus on that as much, then we’re still normal people that just get along,” Norris said of his camaraderie with Sainz.

Early on in 2019, the “Carlando bromance,” as it had been dubbed, was on full display, in part thanks to McLaren’s insightful ‘Unboxed’ YouTube series. At that time, a positive spirit was strong within the F1 team, who had begun a promising campaign after a difficult year preceding it.

Sainz appreciated the positivity despite previously poor results, and said that it was among the things he admired most about the team. “The team has developed, obviously has matured a lot,” he said. “The motivation and the good spirits were there since day one, at the end of 2018.

“That’s the thing that I admired the most about McLaren. It was the fact that even after a tough season in 2018, everyone was in good spirits, everyone was motivated, and that gave me immediately a very good feeling. And the team is exactly in that same position now of good spirits, a lot of motivation,” said Sainz, who added that best of the rest results in 2019 and 2020 have helped to spur the team on.

“But I think everyone has a lot more confidence now. These last two years have given the team a lot of confidence, knowing that the team is progressing, is going in the right direction. From my side I’m proud to have been a part of that and I wish this team the best for the future, because I think it’s what they deserve.”

In 2019 and 2020, Sainz and McLaren managed two podiums together, coming close to victory in an unpredictable Italian GP. Among other, off-camera moments, he says, such successes were his favorite to celebrate. “Obviously a lot of good racing memories, from the two podiums, to good recovery drives, good qualifying, good moments in general, a lot of good racing moments, but also a lot of moments that you guys don’t see outside of the cameras, a lot of laughs, a lot of good dinners back in the hotels, in the restaurants.

“[There were] a lot of good, funny events with Lando that we managed to make them fun out of a pretty boring situation. Events sometimes can be a bit boring, but we sometimes make them a bit more fun. And yeah, a lot of good moments outside the cameras that unfortunately you guys don’t get to see, there’s been a lot of those,” summed up Sainz.

McLaren team boss Zak Brown says that Sainz outperformed all expectations the team had, despite their recognition of his demonstrable talent. The Spaniard clinched P6 in 2019’s driver’s championship, and replicated this result in 2020. In both instances, he bested Norris.

“Carlos has done an outstanding job I think,” said Brown. “We would never have signed him if we didn’t think he was an excellent grand prix driver. I think it’s fair to say he exceeded our expectations. I think he really came into his own in our environment.

“He’s done an outstanding job and he and Lando have helped lead the way these last couple of years – but as you know, in a racing team, your drivers are the superstars, they’ve been big contributors, so have everyone at McLaren to give them a good, reliable race car. Renault’s been a good partner, so it’s all really coming together and Carlos and Lando have made the most of the opportunity.

“I think he’s an extremely determined individual, but I remember when he had his issue in Australia in the very first race [in 2019], and I went to him after qualifying,” he added. “I said ‘I know you were on a mega lap, you just got caught out’, I think it was [Robert] Kubica’s tyre that had gone down or something.

“I immediately went in and said, ‘man, you’re awesome, we all know what happened there’. He said to me at that time ‘I really appreciate that, no-one actually usually comes in and tells me that’. He was an extremely determined individual, but I think athletes, you need to understand their psyche and what makes them work.