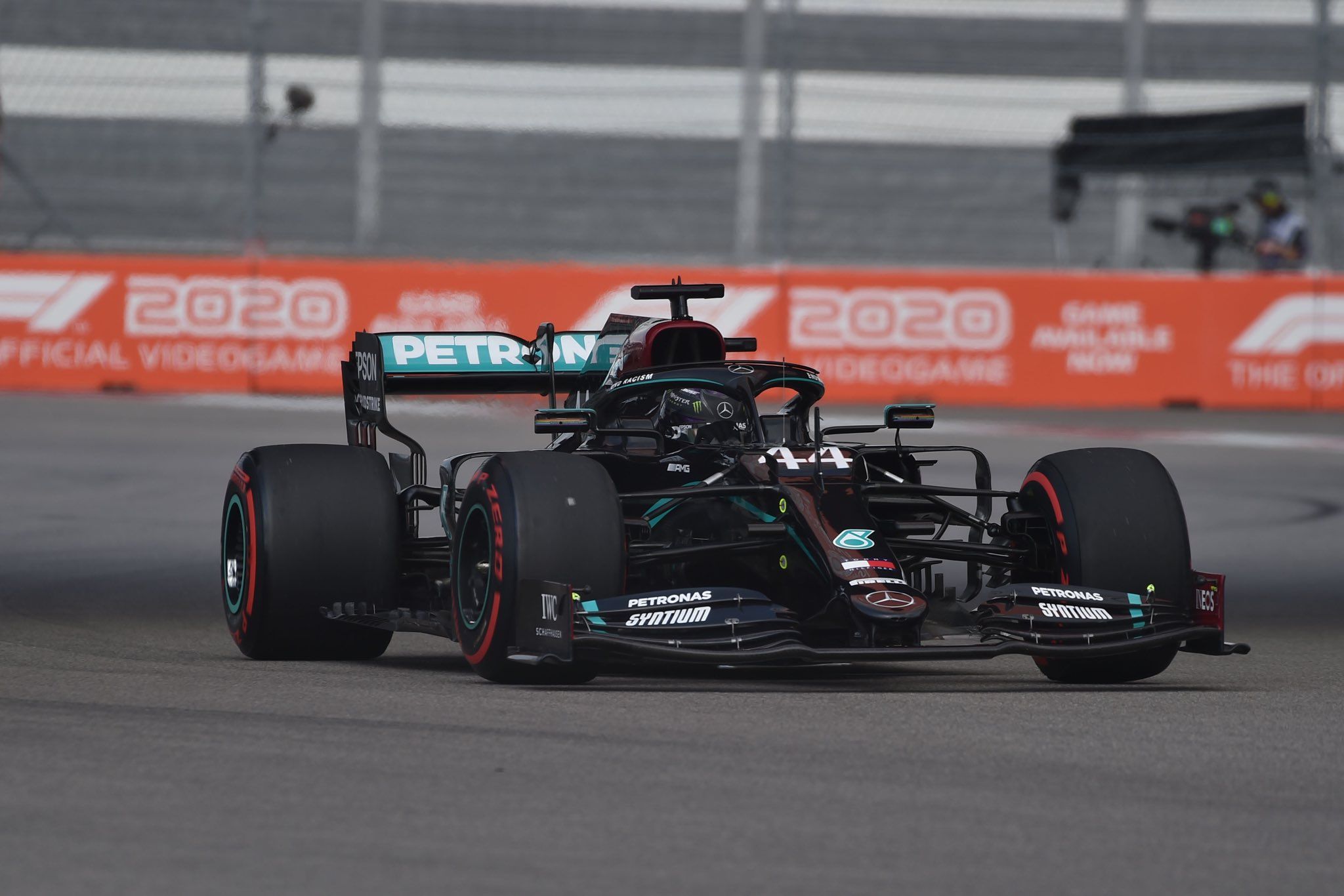 Mercedes’ Lewis Hamilton took pole in F1 Russian GP as Red Bull Racing’s Max Verstappen managed to get in between him and Valtteri Bottas.

There was extra work to do for Lewis Hamilton in first part of F1 Russian GP qualifying at Sochi as he had his initial lap deleted due to track limits in Turn 2. He was not alone as others too saw a same fate, while Renault used a different strategy.

It was cloudy as well with Williams’ George Russell and the Renault drivers using medium tyres for their stint. While the Brit did not set a lap time but Daniel Ricciardo and Esteban Ocon did so. It was Valtteri Bottas leading Hamilton and Sergio Perez, though.

But a soft tyre run for Renault had Ocon in third with Ricciardo behind but then AlphaTauri’s Daniil Kvyat improvement helped him to be third. In the bottom half, Haas’ Romain Grosjean (1m34.592s) was 16th as he was knocked out by Williams’ Russell.

The second part of F1 Russian GP qualifying saw the Mercedes duo and Red Bull Racing’s Max Verstappen choosing the medium tyres. It was not a great run for the trio as Hamilton had his lap time deleted due to track limits in Turn 18.

At the same time, an off for Bottas at Turn 18 meant, he was only fourth after the first run, whereas Verstappen could only manage seventh. Both the Mercedes drivers stayed on the medium tyres but the Dutchman switched to the soft compound.

While Bottas got his lap in, a heavy crash for Ferrari’s Sebastian Vettel at the exit of Turn 3 saw him go over the kerb and smash into the barrier. The session was red-flagged as Hamilton had no time on the board with about 2m15s left on the clock for re-start.

It was close for the Brit as he just made it through to start his final despite a Turn 1 slip to end up fourth but he used the soft compound to do so. Ferrari’s Charles Leclerc (1m33.239s), though, missed out in 11th from AlphaTauri’s Daniil Kvyat (1m33.249s).

After the dramas in Q2, the final part in F1 Russian GP qualifying saw the drivers take no chances as Mercedes’ Hamilton took provisional pole with a 1m31.391s, to be 0.791s ahead of Bottas, with Red Bull’s Verstappen ended up third from Renault’s Ricciardo.

Everyone from Sainz, Renault’s Ocon, Red Bull’s Alexander Albon, AlphaTauri’s Pierre Gasly and McLaren’s Lando Norris opted to set their first lap on the used soft compound. It was all for Hamilton in the end to improve after Bottas made a slight mistake on his lap.

UPDATE: The FIA stewards summoned Latifi, Grosjean, Hamilton and Magnussen for not driving on the left side of the bollard while re-joining the track at Turn 2. Having seen the video and heard from the drivers, it warrated no further action.

All of them accepted the case and agreed that if they do it again in the race, they can be subjected to five-second time penalty. The stewards also noted that the relevant lap time was already deleted for all the four drivers.