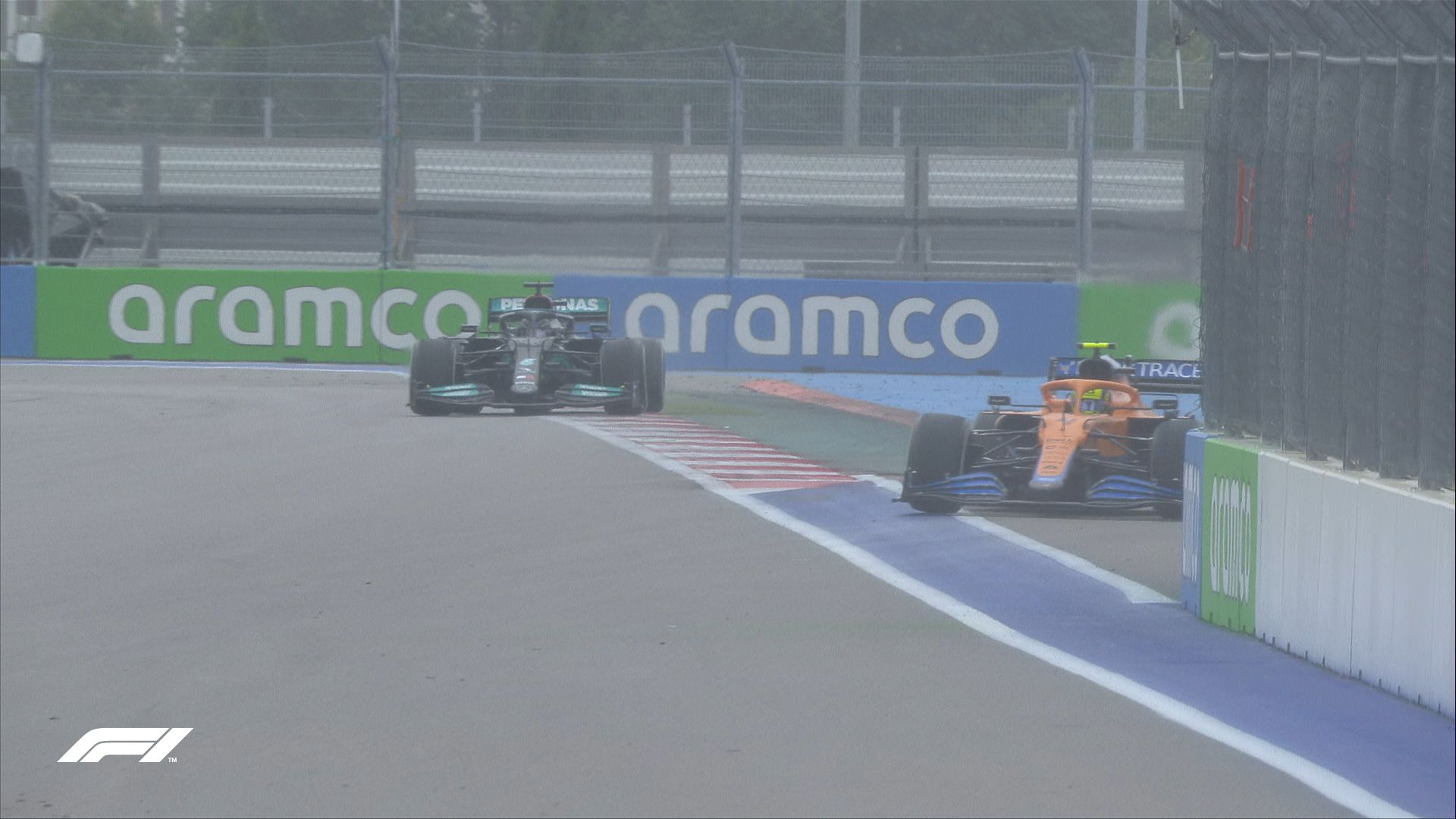 It was cloudy but a dry start in F1 Russian GP as pole-sitter Lando Norris made a good start in his McLaren. But Ferrari’s Carlos Sainz had enough slipstream to get through him at Turn 1 and take the lead, while Williams’ George Russell held onto third.

While McLaren’s Daniel Ricciardo and Mercedes’ Lewis Hamilton battled through, it allowed Aston Martin’s Lance Stroll to sneak through past in fourth. The Australian had to battle against Alpine’s Fernando Alonso to retain fifth after the Spaniard gained on him.

It was a fine move from Ricciardo to take fifth, as Hamilton followed up at Turn 4 to take sixth. Alonso further lost seventh to Red Bull’s Sergio Perez as Alpine’s Esteban Ocon and Alfa Romeo’s Kimi Raikkonen rounded out the Top 10 points position.

There was a brief yellow in Sector 1 after a driver ran through the Turn 2 bollard. He dropped to the back of the pack along with Haas’ Mick Schumacher. The trio of Ferrari’s Charles Leclerc, Mercedes’ Valtteri Bottas and Red Bull’s Max Verstappen started to move.

While Leclerc ran 12th, Verstappen was behind Bottas for few laps in but the Dutchman made the crucial move to pass him for 14th. The Dutchman took only few laps to clear AlphaTauri’s Pierre Gasly for 13th, to slot behind the Monegasque.

At the front, Sainz built some gap to Norris initially but the Brit started to come back on him, as Russell held third and also Stroll, Ricciardo, Hamilton and Perez in the train. Outside the Top 10, Verstappen almost ran into the wall.

As Leclerc started to pass Vettel, he ran a bit wide in the right-hander which allowed the German to get back on him. Verstappen tried to look at the inside when the Monegasque tried to get back on the German, but it was too close to the wall.

He eventually got through him for 12th as Verstappen started his chase of Vettel. At the front, Norris tried a move on Sainz but he fended off and the Brit dropped back. He came back on him from far behind on the back straight and took the F1 Russian GP lead.

Sainz pitted to cover off Stroll, who pitted on Lap 13 and cleared Russell for track position. The Spaniard returned ahead of the Canadian. Behind, Verstappen cleared Vettel on the back straight, with Leclerc also doing the same on the German.

At the front, Norris extended his stint in a McLaren 1-2, as Hamilton stuck behind Ricciardo. The Brit had Perez on his tail with Alonso there too along with Verstappen. Mercedes played the pit game, where the Australian eventually pitted for the hard tyres.

However, it was a slow stop for Ricciardo which dropped him behind the pack of Sainz, Stroll and Russell, in 13th. As Norris led the way, Hamilton pitted on Lap 27 along with Verstappen, where they joined in, in ninth and 12th in the order.

Norris finally pitted on Lap 28 and rejoined in fourth after a clean stop from McLaren unlike Ricciardo. The Brit was well ahead of the pack being led by Sainz but Hamilton cleared the Spaniard for track position. The Mercedes driver was up to fifth to slot behind Norris.

Behind him, Sainz hurried on Gasly for sixth, as Ricciardo and Verstappen did the same to Stroll for eighth. The Australian eventually got through the Canadian, with the Dutchman following suit to be eighth and ninth, respectively.

Gasly pitting helped the likes of Sainz, Ricciardo and Verstappen to be in clean air. Meanwhile, Norris was back in lead after the pit stops for Perez, Alonso and Leclerc, but he had Hamilton on his tail, with Sainz and Ricciardo behind.

A 8.9s stop for Perez due to slow right-rear pull out put him in fourth behind Ricciardo. He had Verstappen behind him but Alonso managed to clear him for sixth. Leclerc was 12th after his late stop, while Bottas slotted himself in 14th in the pack.

Haas, meanwhile, retired Mick Schumacher due to hydraulic leak. Going back to the front, Norris continued to lead Hamilton, where the two had a more than 30s gap to third-placed Sainz. Light rain, though, made things trickier in few corners.

Norris did slip-up but stayed ahead, but Hamilton was close. It was quite chaotic there with rain coming down heavier in parts. While the Mercedes driver eventually pitted for the intermediate, the McLaren crew waited until quite long to pit.

In fact, it took Norris an off to realise the mistake, as Hamilton was already through to the lead to register his 100th F1 win in Russian GP in wet conditions. Amid all of this, Verstappen climbed up to second with Sainz rounding out the podium.

The Dutchman finished 52.422s behind Hamilton, as Ricciardo was fourth from Bottas, Alonso and Norris. There could be a penalty for the McLaren racer after he slipped off the white line on the pit entry. Raikkonen was eighth from Perez and Russell in the Top 10.

Norris took the fastest lap point, as the Aston Martin pair of Stroll and Vettel ended up 11th and 12th. It wasn’t before another collision between the two, where the German was pushed into the wall by the Canadian. They had another touch later on.

Stroll even had a tangle with Gasly, who ended up 13th. Alpine’s Ocon was 14th from Ferrari’s Leclerc, whose decision to not stop ruined his chance after he went off at the same place as Norris. Alfa Romeo’s Antonio Giovinazzi was 16th from AlphaTauri’s Yuki Tsunoda.

Haas’ Nikita Mazepin was 18th as Williams’ Nicholas Latifi was classified 19th despite not finishing the race. Everyone from Vettel onward finished a lap down, while the Russian was classified as down by two laps.

UPDATE: Following the investigation into the incident between Stroll and Gasly, the FIA stewards adjudged the Canadian to be at fault. He was handed a 10s time-penalty with two points on his license, which kept him in 11th itself on the lead lap. The Aston Martin driver now has eight penalty points in the 12-year period.

“Although noting the evidence of the driver of Car 18 that the conditions were extremely slippery especially as he was on old hard tyres, the Stewards determined that it was still the responsibility of the driver to ensure that having left the track due to those very same conditions, he drove appropriately taking them into account when he re-joined and turned into the next corner, considering there were two other cars in close proximity.”

There was relief, meanwhile, for Norris who was reprimanded for his pit lane goof-up. The stewards noted that he did break the rule, but considered the deteriorating conditions and the Brit’s attempts to slow down considerably.

“The Stewards heard from the driver of Car 4 (Lando Norris) and team representative, reviewed the video, radio and telemetry evidence and determined that a breach of the regulations had been committed,” said the stewards. “This was not considered as force majeure because it does not comply with the definition of force majeure in Article 20 of the FIA International Sporting Code.

“However, the Stewards took into account that on the previous lap the driver of Car 4 had passed through Turn 17 (adjacent to the Pit Entry) at a relatively high speed, without loss of control. During the ensuing lap, the conditions deteriorated rapidly and were varied in different parts of the circuit. The driver slowed considerably on entering the Pit Entry, with his speed approximately half of his normal pit entry speed, but still lost control and slid across the painted area between the Pit Entry and the track.

“Although obviously the driver chose to remain out on the track on hard compound slick tyres when others chose to change to Intermediates, and therefore sought to gain an advantage in retaining his race position, we do not consider that the crossing of the painted area was intentional or predictable in the circumstances.”