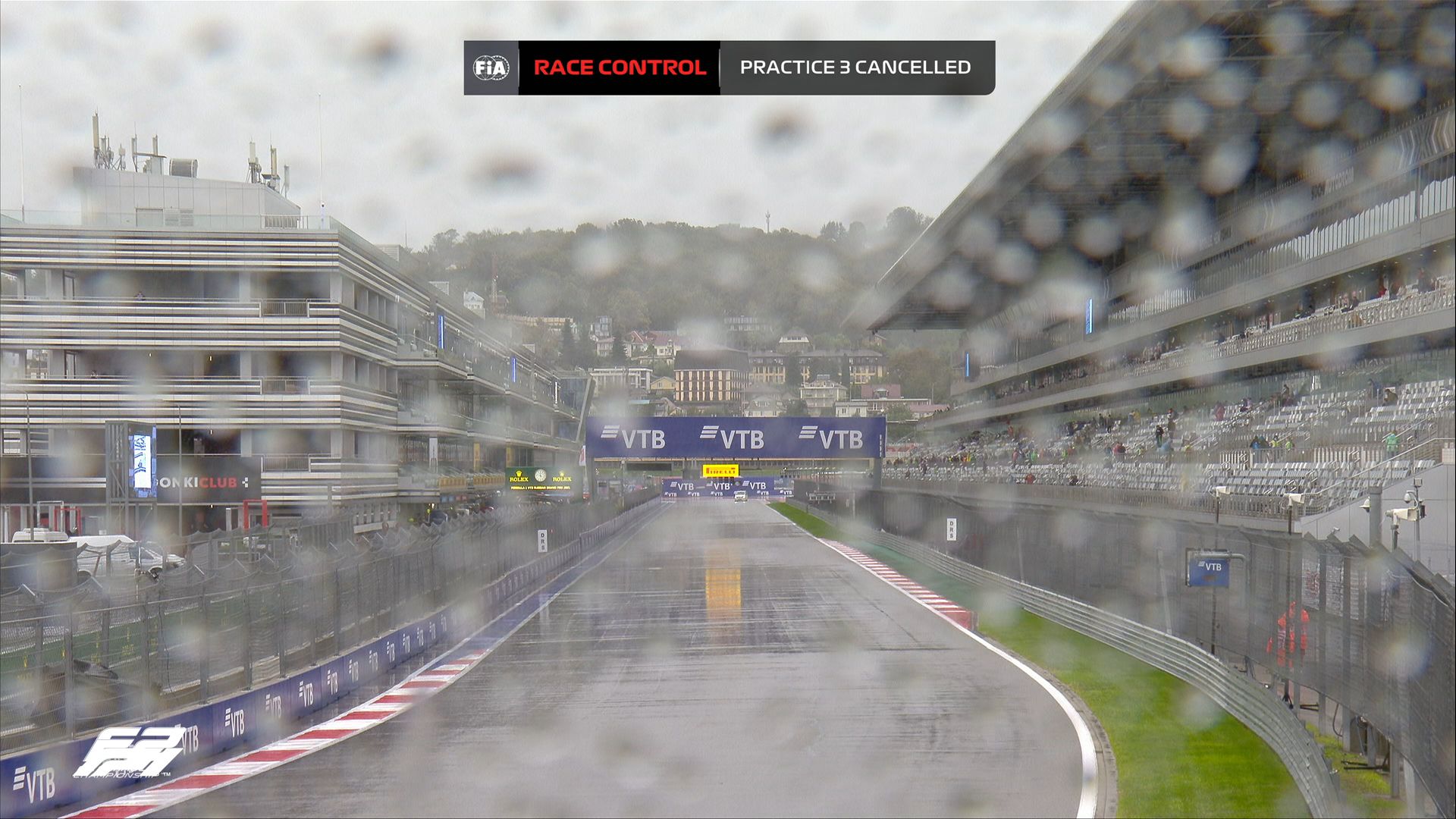 The F1 Russian GP FP3 session stands cancelled due to adverse weather conditions, as the FIA now awaits to decide on qualifying.

With the rain falling since late last night, the FIA took an early decision to cancel the F1 Russian GP FP3 session, about five minutes before the start of the session. The news came after Race 1 of F1 was postponed earlier in the day due to heavy rain.

The plan from the FIA is to keep F1 in priority list and aim to stage qualifying today, even at the expense of the F2 and F3 races. The rain prediction is through the day, but could get lighter as the day progresses, but sunset will be a key factor too.

The schedule has F3 Race 2 after FP3, followed by F1 qualifying and finally F2 Race 2. If no qualifying takes place today, they could postpone it to Sunday morning. “Having received a request from the Race Director and the Clerk of the Course, in accordance with Article 15.3 a) of the Formula One Sporting Regulations, and Articles 11.9.3.m and 11.9.3.o of the FIA International Sporting Code, DECIDE, in the interest of safety, to modify the Official Programme by cancelling Free Practice Session 3 due to Force Majeure.

“For the purposes of the regulations and associated time limits, Free Practice Session 3 will be considered as having taken place, except where otherwise advised by the Race Director,” summed up the FIA official note on Russian GP FP3 cancellation.

Speaking about the weather and how the decisions will be taken going forward, FIA Race Director Michael Masi added: “As we can see already this morning, the weather’s gone up and down like a yoyo, and the intensity of the rain has been increasing, with some thunder also joining us. But effectively the procedure per today will be that we will aim to start all sessions, get everything ready from an operational perspective, and then judge the conditions at the time. What we’re seeing from the forecast side is that we will have… rain until about 1330-1430 local time, and then it decreasing in the afternoon.

“The priority from today’s perspective is obviously Formula 1 qualifying this afternoon. So Formula 1 will take priority, then we were fortunate in restructuring the programme to have the first Formula 3 race yesterday, pre-empting the weather that was going to happen this morning, which based on what we saw when we came out to the circuit this morning was absolutely the right decision; it was torrential at the time we would have been having the F3 race. So we did that, and now we’ll just sort of look at the day ahead and just take it step by step.

“We would have a couple of options, as we’ve seen before, so we could start the session and red flag it immediately and let the clock run down and let’s judge what the weather’s like at that time. Alternatively, if we can see that it’s just going to be torrential for the entire session, we would just abandon FP3 and aim for qualifying. The determining factor this afternoon [for qualifying] will be the light. Sunset locally is about 1815… but with weather conditions like this, obviously light diminishes far earlier, so that will ultimately be our cut-off point. If qualifying isn’t able to happen today, as we’ve seen a few times before in the past, then we will re-do a programme and hold qualifying on Sunday morning.”

On F2 side, as noted above, its Race 1 stands postponed, with decision on that side too awaited of its future races. “The race was set to get underway at 10.30am local time on Saturday morning, however the wet track surface forced the pit lane opening to be delayed while track conditions were monitored. With circumstances not letting up, the opening race of the weekend was postponed,” said the statement. “Heavy rain is expected to fall at the track until roughly 1.30pm local time, with the forecast projecting its intensity to decrease into the afternoon. Further information will be provided in due course.”

Here’s what everyone said after Friday in F1 Russian GP