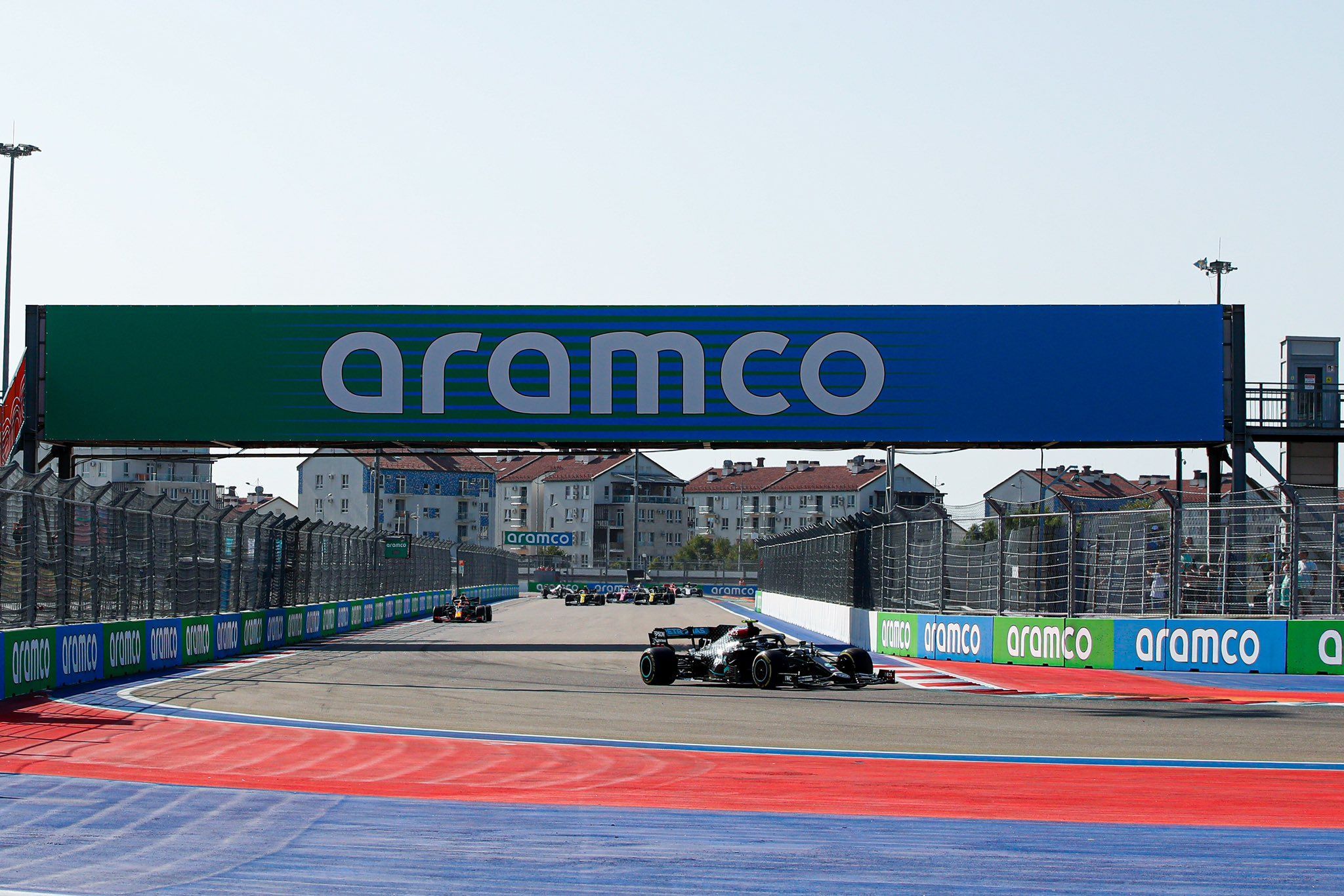 Mercedes’ Valtteri Bottas finally got a win in F1 Russian GP after double penalty to Lewis Hamilton to be third behind Red Bull Racing’s Max Verstappen.

Pole-sitter Mercedes’ Lewis Hamilton held onto the lead in F1 Russian GP at Sochi despite on the soft tyres with Valtteri Bottas just behind as Red Bull Racing’s Max Verstappen went wide at Turn 1 but re-joined still in third place from the Renault drivers.

Daniel Ricciardo had a good start but he lost to his teammate Esteban Ocon after getting a bad corner exit. Racing Point’s Sergio Perez also lost out to be sixth with AlphaTauri’s Pierre Gasly gaining to be seventh from Ferrari’s Charles Leclerc.

It was a solid start from the two Haas drivers as well with Kevin Magnussen in ninth and Romain Grosjean 10th as AlphaTauri’s Daniil Kvyat steadied in 11th on the hard tyres. There was multiple crash behind with McLaren’s Carlos Sainz crashing first.

The Spaniard went wide at Turn 1 and while respecting the re-join rule, Sainz hit the wall to crash out as teammate Lando Norris had some issue with his power to almost stop as he dropped back of the pack as well to make it a double whammy for McLaren.

Up ahead, there was more dramas with Racing Point’s Lance Stroll crashing out at Turn 4 after a tangle with Ferrari’s Leclerc. There was no investigation necessary for the incident as the F1 Russian GP was neutralised by a safety car.

The likes of Albon, Norris and Williams’ George Russell dived into the pits to change tyres with Hamilton leading Bottas and Verstappen on re-start. The Brit’s race got compromised soon with a two five-second penalties for Practice Start Violation 1 & 2.

He did so pre-race for which he was already under investigation as the FIA handed him the time penalty just as the F1 Russian GP re-started. The order at the front stayed pretty much the same as Kvyat made up to two places to be ninth in the order.

At the same time, Albon, Norris and Russell were in a battle of their own at the back of the pack, where the Thai racer initially lost out but regained the places to be 16th with the McLaren driver in 17th. Meanwhile the FIA put Perez under investigation too.

It was a Turn 2 violation, possible for track limits. The Mexican was unfazed as he challenged Ricciardo to take fifth from the Australian before the latter pitted. Bottas, meanwhile, took the lead after the pit stop for Hamilton on Lap 17.

The Brit served his 10 seconds time to drop at the fag end of the Top 10. He started to gain places, though, with him already in the Top 5. There was team orders on at Renault with Ocon giving way to Ricciardo to catch Ferrari’s Vettel.

They were fighting for seventh as Ocon got stuff behind the German. Ricciardo was given the way at Turn 2 but he ran over the sausage kerbs. He was put under investigation straightaway for not adhering to the Race Event notes for Turn 2.

The Australian made the move stick to get seventh but he was handed a five-second penalty for not re-joining the track properly. Ocon, meanwhile, passed Vettel as well but the strategy worked for Ferrari as Leclerc managed to take track position.

Only Raikkonen was the one left to stop in the pack, where Norris ran in 11th as Albon pitted the second time to be 15th. The Finn couldn’t hold the Frenchman long for ninth as he eventually pitted to drop outside the Top 10 position.

There was a brief period of Virtual Safety Car after Haas’ Grosjean rammed into the bollard at Turn 2, which the marshals had to change. Strangely, AlphaTauri pitted Gasly as he dropped outside the points with his teammate Kvyat chasing Ocon for seventh.

It was getting tasty at the fag end of the Top 10 with Norris losing out to the fresher Gasly and Albon. The Frenchman actually passed both to be ninth again as the Thai racer had to settle for 10th, while Alfa Romeo’s Antonio Giovinazzi was up to 11th.

At the front, it was clean run from Bottas to win the F1 Russian GP, his first of 2020 since the Austrian GP as the Finn also got an extra point for fastest lap, with Verstappen in second, while Hamilton recovered to third ahead of Perez and Ricciardo.

The Australian kept fifth despite the penalty with Leclerc doing well in sixth from a fighting Ocon and Kvyat. The Frenchman had the Russian all over on his tail but managed to fend off with Gasly ninth and Albon rounding the Top 10.

The Thai racer also had a five-second penalty for Turn 2 incident but kept 10th as everyone behind him were a lap down to the leader. It was Alfa Romeo’s Giovinazzi in 11th from Haas’ Magnussen as he fended off Ferrari’s Vettel and Alfa Romeo’s Raikkonen.

A late stop from McLaren’s Norris dropped him to be 15th as Williams’ Nicholas Latifi was 16th, Haas’ Grosjean 17th and Williams’ Russell 18th after a late stop. DNF: Stroll, Sainz.