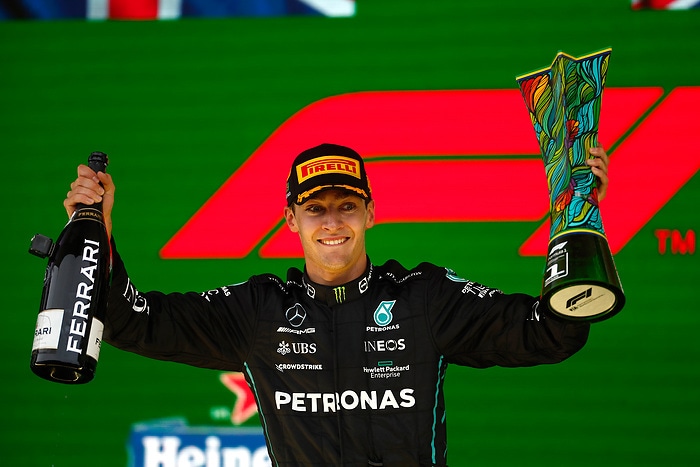 George Russell was without a doubt his first F1 win in Brazil as he recalls the moments and also the consistent Top 5 run for him.

Having moved to Mercedes after three years with Williams, Russell finally was able to fight at the front of the field and which he had hoped for in a long time. It wasn’t the smoothest of rides but he was consistently in the Top 5 and got numerous podiums.

In a year where Mercedes did not have the best car, Russell was their mainstay and got them the results to keep them in the fight for second. The improvements eventually led to their sole win of the year at the hands of Russell which was no doubt his best moment.

“My on-track highlight without a doubt was Brazil,” recalled Russell. “Obviously, it was a very special moment for me winning my first Grand Prix. What was even more special was seeing how the whole team reacted to that victory and how much it meant to everybody in Brackley and Brixworth. That was a really special moment for me.

“I was very emotional because it was one of the few races that I didn’t have anyone from my family or my girlfriend there. Calling them afterwards was really a special moment. Just the journey that we have been on together and throughout the past couple of years in Formula One but especially with my parents from when I was younger.

“Looking back on that race since it’s sunk in, just knowing what an achievement it was for everybody who is part of this team and knowing that all this hard work has been rewarded with the first place trophy, which seemed just out of reach for so much of this season,” summed up Russell, who ended up fourth in the standings ahead of Lewis Hamilton.

The consistency from Russell was such that out of the 22 races, he ended up inside the Top 5 in 19 of them. In fact, out of the three races he did not finish inside the Top 5, he retired in two of them and ended up eighth in the third. But despite this, he did have slight frustration since he wanted the team to be further up.

“I was satisfied as a team we were getting the most out of our car but a little bit frustrated that we weren’t making as much progress as we would have liked to and still struggling to get a true handle on the issues we faced and how we could overcome them,” said Russel.

Here’s Mercedes pair on moments for Mercedes in 2022

Here’s Mercedes on being tough situation already in testing