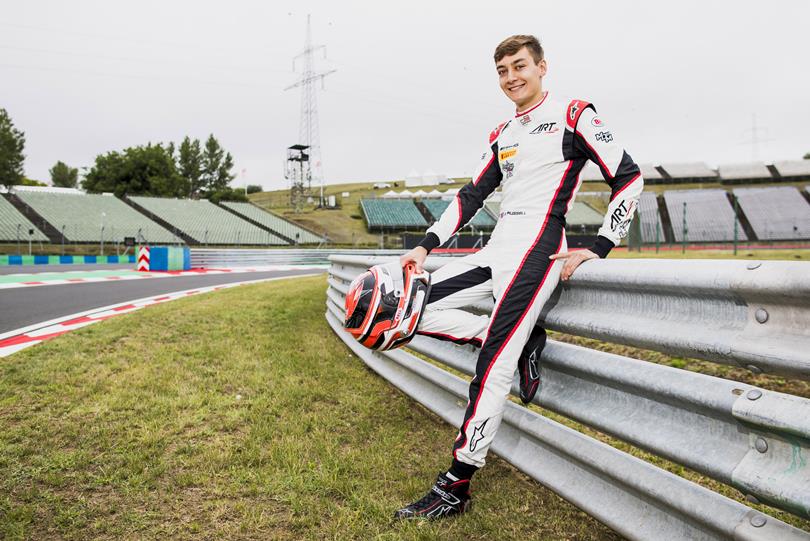 Share
Facebook
Twitter
WhatsApp
Linkedin
ReddIt
Telegram
Briton grabs P1 from Hyman at flag in Budapest
George Russell claimed the top spot in this afternoon’s free practice session at the Hungaroring with a late, fast lap as the chequered flag dropped, capping a fast and frantic session which saw the lead change countless times across the 45 minutes before the Briton finally snatched P1 from Raoul Hyman and Nirei Fukuzumi.
The Mercedes Junior driver stopped the clock at 1:32.255, going fastest in the first 2 sectors but running slightly wide at the final turn to steal the top spot from Hyman by just 0.085s in a very close session at a track where the teams had tested just one month ago.
The session opened to warm, sunny conditions and lengthening shadows all around the circuit, with all of the field except for Alessio Lorandi running straight out on track: the times started tumbling as almost the entire grid swapped the top spot right from the start. Nevertheless there were no real problems on track until Giuliano Alesi hit a marker board at the halfway mark, spreading debris across the track and prompting a red flag period to deal with it all.
The field were back on track 8 minutes later as the circuit went live, apart from Jack Aitken who struggled to get going at the restart and was pushed back to the pits by his team to investigate as his rivals looked to steal P1 from the likeable Briton. Over the closing minutes the battle for the top spot was hotter than ever: Arjun Maini claimed it with 10 to go, with teammate Lorandi on a charge before running wide at turn 11, and then it swapped between Fukuzumi, Russell, Fukuzumi and Hyman, with the South African quickest in the tricky middle sector.
It looked like he’d done enough to claim the honours as the clock ticked down to zero, returning to the pits as Russell hit his final lap: the Briton’s first two sectors were purple, giving him enough margin despite the small mistake at the final corner to take the session for himself. Behind the top 3 Niko Kari, Maini, Aitken, Kevin Joerg, Leonardo Pulcini, Tatiana Calderon and Bruno Baptista were all well with a second of Russell and will be looking to overturn his advantage in tomorrow morning’s qualifying session.
GP3 Series Press release
Provisional Free Practice Classification