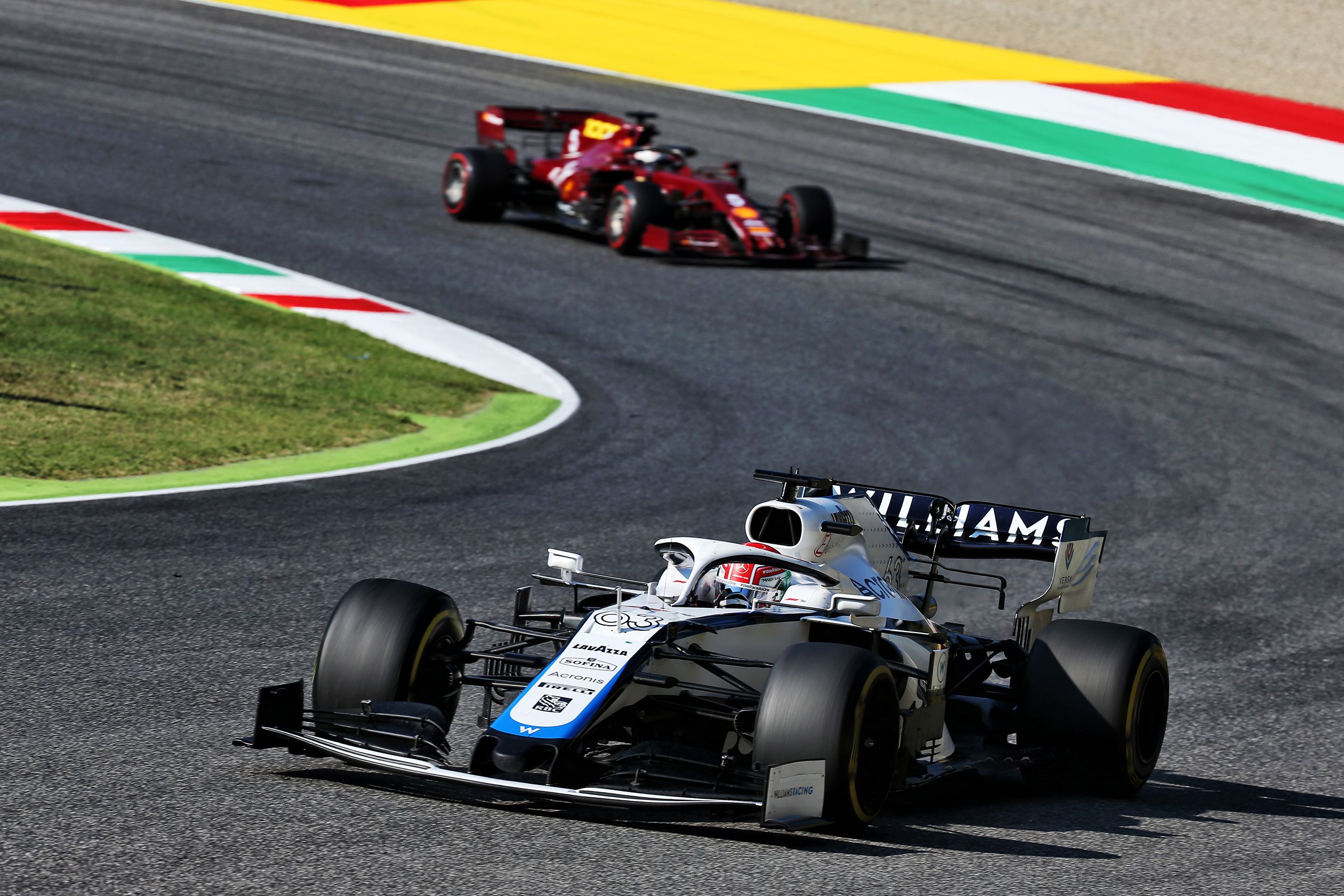 George Russell felt he lost the point due to the final red flag period and a hit by Kimi Raikkonen as Sebastian Vettel lauds his efforts after tussle in F1 Tuscan GP.

With only 12 cars left in the F1 Tuscan GP at Mugello, Williams’ Russell had the brightest of chance to score his and the team’s first point of the 2020 season, but it wasn’t to be. The Brit came ever closer to do so until the final red flag period.

Russell was running ninth, fighting off Alfa Romeo Racing’s Raikkonen, Ferrari duo of Vettel and Charles Leclerc and Haas’ Romain Grosjean. He had track position until the final red flag for Racing Point’s Lance Stroll, which changed the complexion for him.

A bad getaway from another standing start, meant, he dropped back and had to fight Ferrari’s Vettel, in particular, to get back inside the Top 10. Both the drivers also suffered due to the grid position with marbles, while the Brit had another issue of cold tyres.

Raikkonen and Grosjean were allowed to un-lap themselves before the final re-start, which helped them to warm their tyres for that extra lap. This helped the Finn to gain positions over the Ferraris too and ultimately finish in the Top 10, even with a penalty.

Grosjean gained initially but since the Frenchman was losing nearly two seconds due to damage, he could be overtaken quickly. Eventually, Russell was a bit heartbroken after the valiant effort, which was event recognised by Vettel in their tussle.

“We made a mega start for the first, can’t remember all but I was ahead of the Ferrari cars,” said Russell. “The pace was good, I was fully maintaining the positions and we had P9 sort of in the bag there. It was just to bring it home as the tyres were great.

“But then, we just lost all position off the line with the second re-start, with a poor launch. I don’t know what happened because everything seemed to be on target with the procedure. With the soft tyre, I had too much wheelspin which was really odd.

“I was hit by Kimi as well, you can’t do anything on it. I was driving my heart out,” summed up Russell. Williams’ Dave Robson, not just talked about the un-lapping procedure but also, Leclerc being helped by a late tyre change under red flag.

“With George, we made good tyre and strategy decisions throughout the race to get him to ninth place at the second safety car, and in a position to race Leclerc for eighth,” he said. “Frustratingly the subsequent red flag lost us track position and allowed Grosjean and Raikkonen to un-lap themselves.

“We had a poor final stint, losing places at the restart and then struggling to overtake Vettel.” As mentioned above, for Russell, the Tuscan GP was another validation of his talent as he pushes to take that next step, this time, vouched by the four-time F1 champion.

“I know he was looking for his first point, I felt a bit sorry for him to be honest,” said Vettel to Ziggo Sport. “Because I think he drove really well before the last re-start. He was faster than us throughout the stint, he managed his race well.

“I could see what he was doing, so it will come for him in future. Poor soul, I think he deserved the point in the race. Obviously, if I let him by on the last lap because he fought harder than anyone, then I would be hung somewhere (joke). I really feel sorry for him. He fought his way up to the points, just didn’t get the result,” summed up Vettel.