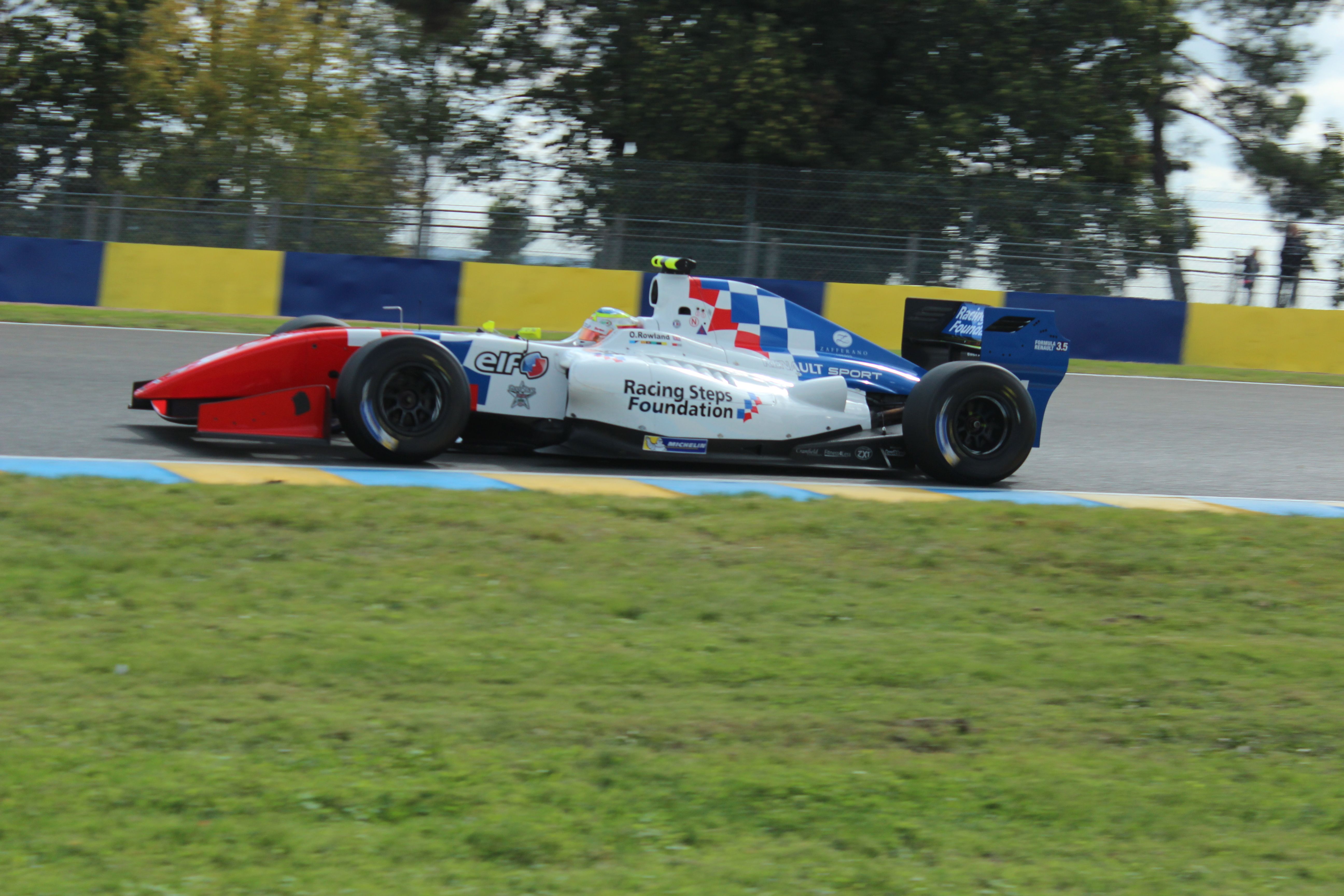 Starting from pole position, Oliver Rowland (Fortec Motorsports) resisted the challenge from rival Matthieu Vaxiviere (Lotus) to triumph for the seventh time this year. The Britons success puts him equal with Carlos Sainz for most wins in a season, but also sees him that much closer to clinching the Drivers championship as well as the first team title in the Formula Renault 3.5 Series for Fortec Motorsports. Second across the finish line, Matthieu Vaxiviere lost his runner-up result following a penalty for not respecting the track limitations. Rookie Egor Orudzhev (Arden Motorsport) and Tom Dillmann (Jagonya Ayam with Carlin) joined the victor on the podium. The win for the Racing Steps Foundation protégé sees him that much closer to the driver title because Matthieu Vaxiviere must win tomorrow and hope for a non-points scoring result for his adversary to keep the suspense going.

This morning, the leader in the general classification, Oliver Rowland took his sixth pole position of the year with a best time of 1:21.002 ahead of Egor Orudzhev and his rival Matthieu Vaxiviere. Tom Dillmann and Tio Ellinas (Strakka Racing) completed the top five on the starting grid.

The tension rises between the contenders

On lap eight, Matthieu Vaxiviere tried, without success, to make his opponent crack. Three laps later, his new offensive resulted in contact between the two. The Englishman avoided a puncture while the Frenchman lost a piece of his front wing. The gap grew as the laps ticked off, leaving Oliver Rowland alone out front.

At the conclusion of lap 30, Oliver Rowland took the win by nearly three seconds from Matthieu Vaxiviere. The Lotus driver lost his position due to a 10-second penalty following several infractions relating to track limits. Egor Orudzhev and Tom Dillmann joined the Briton on the podium. Dean Stoneman finished fourth ahead of Aurélien Panis (Tech 1 Racing) and Yu Kunamaru (Pons Racing), who started 11th. Nyck de Vries (DAMS), Roy Nissany (Tech 1 Racing) and Tio Ellinas also finished in the points. They were followed by Matthieu Vaxiviere in 10th place.

Oliver Rowland : “The start was difficult and Egor was very close to me, but I managed to keep him behind me. After that, I really had no answer to Matthieu’s pace. Although the contact made my life easier, I was a bit worried for my tyre and tried to stay away from the curbs, as well as stay within the track limitations to avoid a penalty. I spent two seasons with Fortec in Eurocup Formula Renault 2.0 and this is my second season in the Formula Renault 3.5 Series with them. It is great to reward such fantastic people with this victory record.”

Egor Orudzhev : “Vaxiviere cost me a lot of time. I tried not to get overtaken at the start of the race, but he kept short-cutting and didn’t leave me any room when I ran next to him. I think his behavior merited a drive-through, but I am all the same satisfied to have gotten this podium.”

Tom Dillmann : “It is great to be back on the podium. We’ve had a difficult season and we have completely changed our approach in terms of set-up since the Nürburgring. We are now more competitive in qualifying and we want to end the season in style. Tomorrow, if we do a good job with the traffic and if we can get the pole, anything is possible.”