Felix Rosenqvist made the most of his pole position and took the lead as the lights went out. On the first few metres, Santino Ferrucci (kfzteile24 Mücke Motorsport) and Lance Stroll (Prema Powerteam) followed behind him. Soon after that, the safety car was deployed as the car of Artur Janosz (Eurointernational) had to be recovered following a start line collision.

After the restart, Rosenqvist hold on to the race lead and even managed to pull a slight gap. On lap nine, the order in the chasing pack changed after Mikkel Jensen found a way past his team-mate Santino Ferrucci. Four laps later, American driver Ferrucci collided with Jake Dennis and retired. Only one lap after that, Jensen mounted his first challenge to Rosenqvist, who was still leading the race, but didn’t manage to overtake him. Instead, the rookie driver had to focus more on defending his position in the closing stages of the race, because Jake Dennis was waiting for him to make a mistake. However, Jensen didn’t grant him this favour and eventually crossed the line in second place behind Rosenqvist and ahead of Dennis.

Behind the three fastest youngsters, the junior drivers showed thrilling racing action as well. In the closing stages, Raoul Hyman initially defended his fourth place, but a slight error on the final lap allowed Antonio Giovinazzi and Charles Leclerc to get past. Prior to that, Hyman and Leclerc had overtaken Lance Stroll in the battle for fourth while Stroll dropped out of the point-scoring positions due to a collision with Antonio Giovinazzi a little bit later. After 19 laps, the 16-year-old Canadian finished eleventh.

Behind Hyman, Pietro Fittipaldi (Fortec Motorsports) finished seventh in the presence of his grandfather, two times’ Formula 1 World Champion Emerson Fittipaldi. For the Brazilian, who drove with a splint for his broken hand incurred at Pau only a fortnight ago, it was his best FIA Formula 3 European Championship result. George Russell (Carlin), Brandon Maïsano (Prema Powerteam) and Arjun Maini (Van Amersfoort Racing) completed the top ten. 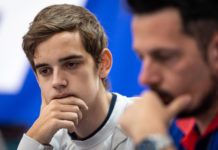 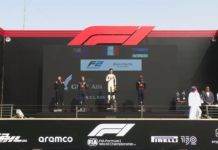