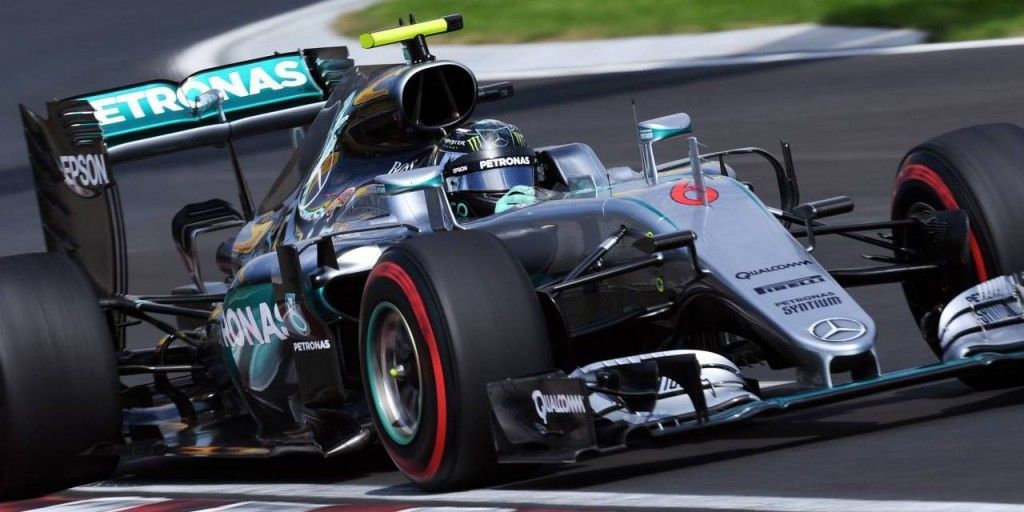 Nico Rosberg was the fastest driver at the Hungaroring in a chaotic qualifying which started with a soaked track and ended with slick tyres. Hamilton was 2nd and Ricciardo completed the top 3 for Red Bull.

The session started with a 20 minutes delay due to the amount of water on track. All drivers hurried to the track, as more rain was expected soon. Drivers complained about heavy rain and poddles, so the session was red flagged. Pérez was fastest ahead of Hülkenberg, Alonso, Nasr, Ricciardo, Bottas, Verstappen, Grosjean, Vettel and Palmer. The session was restarted with a much more drivable track. Ricciardo and Verstappen climbed up to the top of the timesheets some seconds before Ericsson crashed against the barrier and the session was red flagged again.

Thanks to the presence of some sunlight, some drivers decided to go back on track with the intermediate tyre. Hamilton was setting the fastest lap when he made a mistake and ran wide through the gravel in the chicane. The session was red flagged once again after Massa, who was using the intermediate tyre, lost control of his Williams and crashed. Nasr led the session ahead of the Red Bulls at that time, while Magnussen, Gutiérrez, Sainz, Ericsson, Wehrlein and Haryanto were the drivers in the danger zone. Haryanto crashed and the session was red flagged again, this time for good. This left Palmer, Massa, Magnussen, Ericsson, Wehrlein and Haryanto out of Q2, while Rosberg, Hamilton and Alonso were the fastest of the session.

Q2 started with all drivers on the intermediate tyres. Hamilton led ahead of Verstappen, Ricciardo and Rosberg with a big gap with the drivers behind. Bottas was the first drivers to risk with the slick tyre and everyone copied him, since he set the fastest time on his first attempt. The positions changed constantly and it was finally Grosjean, Kvyat, Pérez, Räikkönen, Gutiérrez and Nasr who were eliminated Verstappen was fastest ahead of Rosberg, Ricciardo, Alonso and Hülkenberg. A mistake in the first corner left Hamilton on P10, very close to elimination.

The Mercedes were leading the session after the first two attempts on Q3, but Ricciardo was less than 2 tenths behind them. The yellow flags after Alonso spun stopped Hamilton and many others from improving their times. Rosberg, on the other hand, was able to set the fastest laptime and got pole position for the Hungarian GP. Hamilton, Ricciardo, Verstappen, Vettel, Sainz, Alonso, Button, Hülkenberg and Bottas.