Leader of the season Nico Rosberg was fastest in the first session after the summer break, ahead of his team-mate Lewis Hamilton on one-tenth in friday morning at the Belgian Grand Prix. 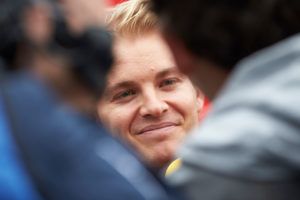 In friday F1 teams went back to work after a long summer break. In the two teams first training worked reserve drivers – in the Marussia Alexander Rossi temporarily took the wheel car of Max Chilton, and in the Sauber Giedo van der Garde has replaced Esteban Gutierrez.

In Caterham replaced the driver for whole weekend – Le Mans winner Andre Lotterer made his debut in Formula 1, replacing Kamui Kobayashi, and in his first official session was ahead team-mate.

Rosberg took the lead shortly after the start of work on the track and although Hamilton and Fernando Alonso in the session several times was ahead of Nico, in the end, he was the best with a score of 1.51,577. Lewis lost 0.097 seconds, nearly crashed the car in “Bus Stop” at the last minute.

Alonso was third, losing a couple of tenths, and Kimi Raikkonen was pleased their fans the fifth result. Between Ferrari’s drivers located Jenson Button on McLaren, and Force India driver Sergio Perez closed the top six. Ferrari car of Raikkonen had troubles with ERS system.

Many of teams have finalized aerodynamic to reduce drag and achieve the maximum on tracks in Spa and Monza, requiring little downforce. According to tradition, teams began the session with a small aerodynamic clamp, gradually increasing it to optimize grip on the second sector. With these settings, many have not escaped the reversals and departures, but without serious consequences. Vettel had to cut the program because of problems with the car – the German was able to pass only 11 laps.

Drivers of Williams were only the tenth and 15th. Daniil Kvyat, who a year ago opens in the Spa account his victories in the GP3 series, has become the 12th, winning half a second from his partner in STR Jean-Eric Vergne. Alexander Rossi, who will not now drive in the grand prix, was over a second slower than Marussia team-­mate Jules Bianchi.