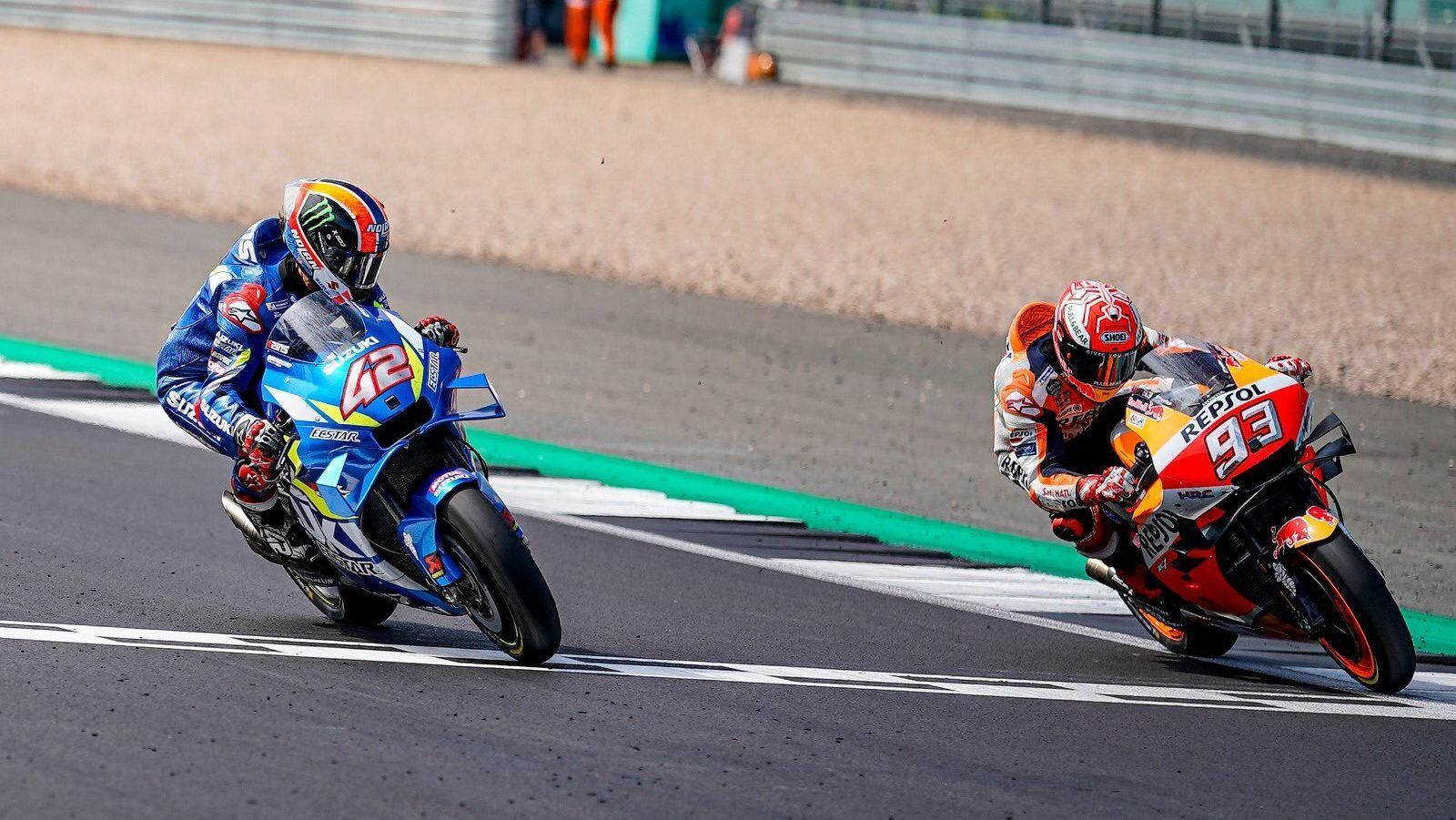 Suzuki’s Alex Rins admitted to making mistakes in British MotoGP race but was out of the moon beating Honda’s Marc Marquez in that manner.

Rins cleared Yamaha’s Valentino Rossi quickly in his chase of Marquez. The two then had a heated fight all-through the British GP, with Rins even getting the better of Marquez twice but the latter regained his lead.

However, Rins kept the best for the last as the Spaniard took the inside line in the final corner and beat Marquez in the lead up to the chequered flag by just the 0.013s margin, in disbelief of Marquez and all watching.

Despite the thrilling fight, Rins admitted to making mistakes still. He also recalled the two crashes he had in the previous races which helped him prepare better as he learnt more from those incidents.

“Unbelievable, I’ve beaten two legends: Valentino in Texas, Marquez here in Silverstone,” exclaimed Rins. “It was so crazy. I beat Marquez here but now I need to continue; I know it will be difficult.

“I made some mistakes, I nearly crashed at the first corner – I had a big moment. We then played a little bit. Marc closed the throttle and I was riding one lap in front of him.

“But very quickly I let him past because he was faster than me in the last sector and I didn’t want to show my weak points. I was stronger than him in all the fast corners and the chicanes.

“But in the last sector, he was much faster than me on acceleration out of the three slow corners before the last corner. But luckily I could gain a lot of metres back from him through the last corner.

“Otherwise, he would escape. Two laps to the end I crossed the line very close to Marc and I thought the race was over. But then I saw one lap remaining and thought: ‘wow, Alex, come on you need to keep pushing’.

“I was able to cut a lot of time in the first and second sectors and then in the last sector Marc was much stronger than me. Into Turn 16 he was able to break really hard.

“The last lap was unique though and it was possible for me to overtake. I have a lot of confidence with my Suzuki right now. We work so hard during the practices to get the feeling right and I was able to play with my bike to brake harder.

“The last two crashes we had at Assen and the Sachsenring I was fighting at the top, we had a lot of confidence. And in Silverstone, I was a lot more comfortable behind Marc.”

For Marquez, the Spaniard was angry after the British MotoGP race but since he gained points in the championship, it wasn’t as bitter pill as the defeat to Dovizioso in a similar fashion in Austrian GP.

“I have the mentality of a winner, and if I lose in the PlayStation I will be angry,” said Marquez. “So of course I’m angry to lose in the last corner. It’s in a circuit that we struggle.

“We can say that we are in the worst part of the championship, in the worst moment because two consecutive races with the worst result in the calendar, second place. But it’s not my goal now to win races.

“My goal is to win the championship. With this kind of strategy we are increasing that advantage and this is the most important. It hurts because it’s the same way, more or less.

“But I increased 20 points on my advantage in the championship. So two weeks ago was worse. In British GP, it was difficult to defend because I didn’t know his weak points.

“But when I tried to do my strategy in the middle of the race to follow him for some laps to save some tyre, to save some fuel and to know where he was struggling, he closed in a little bit more.

“Then we lost maybe one second in one lap and I saw that Maverick was coming. So I said, ‘okay, I don’t care about the victory. I care only about the points. I knew that if I stayed there, I could take only 16 points in the race.

“It was my strategy in 2017 and 2016 to stay behind and attack in the last five laps as you have a better tyre. But now I’m in a different situation in the championship. To win the final battle, you need to lose some battles.”