Home F1 Ricciardo wins in Spa thanks to Mercedes chaos 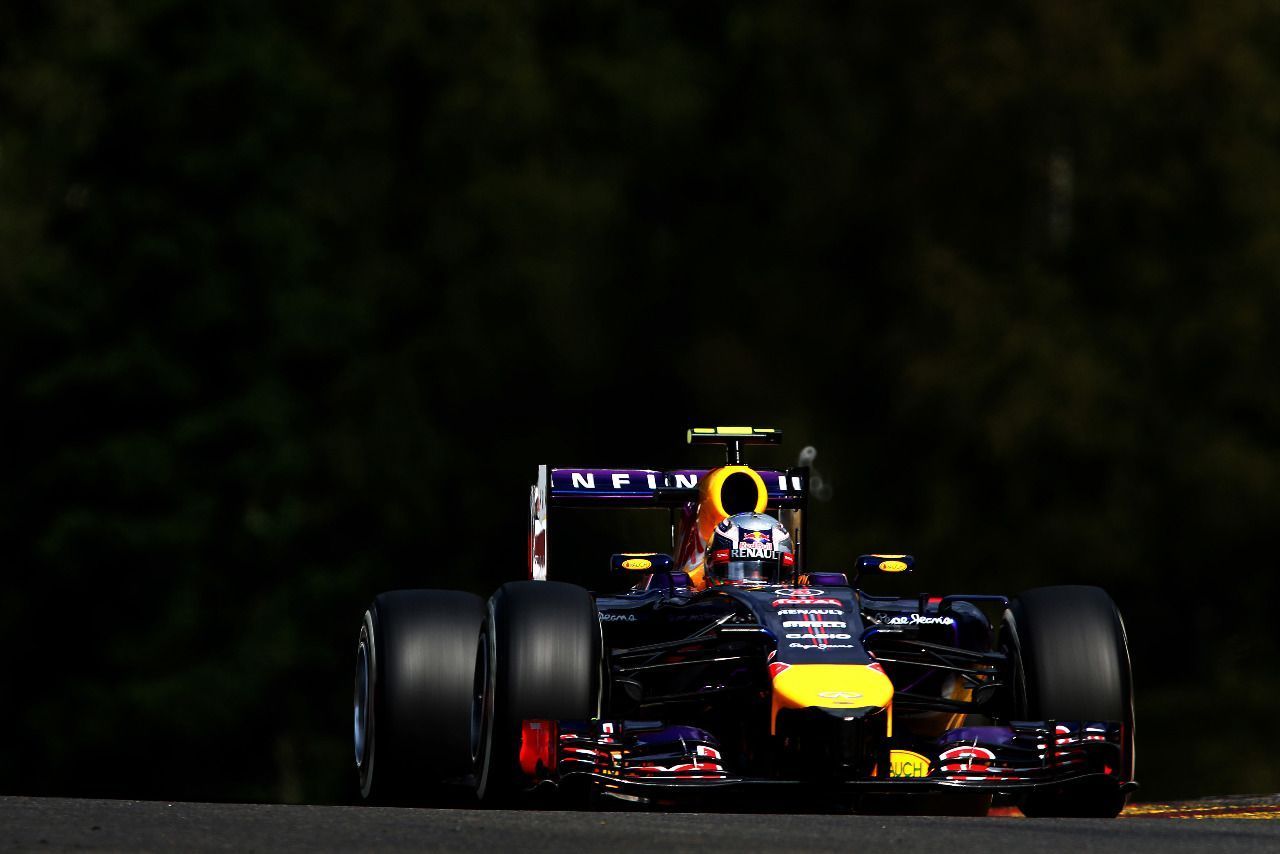 Share
Facebook
Twitter
WhatsApp
Linkedin
ReddIt
Telegram
Daniel Ricciardo has taken advantage of the accident between the two Mercedes to win the Belgian Grand Prix. Rosberg, with many problems, has finished second increasing his lead to 18 points against Hamilton, who did not finished. Bottas completed the podium, away from a surprising Raikkonen.
The race started with a clean start. Hamilton was winning at the top with Rosberg, who also was overtaken by the Red Bull of Vettel. The four-time world champion was also trying to overtake Hamilton at the end of the Kemmel straight, but when braking fell back to third place. Ricciardo and Alonso remained behind, holding positions waiting for something to happen ahead. At the back of the grid we saw a puncture from Bianchi, while Maldonado and Lotterer had to leave prematurely. Shame by the newcomer this weekend that has not lasted more than two laps on track.
The race suffered a key moment at the very start of the second lap. The curve at the end of the Kemmel straight, Rosberg was trying to overtake Hamilton, but the German did a mistake and puctured a tyre of the British, while the leader of the World Championship broke the spoiler. Hamilton reached the box being in the last position, while Rosberg pressed upon him the Red Bulls and Alonso. Nevertheless Nico was in front, while behind we saw a struggle in which Ricciardo and Bottas overtook Vettel and Alonso respectively.
On lap 10 the first pit stops dance with Rosberg and Raikkonen coming first began. In the car of the German mechanics changed the spoiler, which took advantage the Ferrari driver to stand before him. A lap later Vettel would do the same, entering behind the Finn, and laps later Alonso, Bottas and finally Ricciardo. Note that in the pit stop the Spaniard also spent the 5 second penalty because of the incident at the start of the test, where the mechanics spent more time than allowed on the grill.
After the first stops in boxes, Ricciardo firmly led followed by Raikkonen, Vettel, Rosberg and Bottas. The Williams driver with fresher tyres, overtook Rosberg with the DRS, the German sat on the harder compound. Soon after, Rosberg looked how a Sauber put in his head a piece of tire, which was engaged in its antenna, hitting the visor. After that incident Rosberg also suffered a bit with his car, to the point where he had to get back to the pits to change tyres, a move that also would copy shortly after Raikkonen and Vettel. This time Mercedes went out ahead of them, but behind the two McLarens and Alonso.
After some good moves Rosberg, Raikkonen and Vettel were the first of the grid, fourth and fifth respectively were Ricciardo and Bottas. After several laps the Australian stopped and came out ahead of Rosberg, while Bottas in his stop stood behind Vettel. Rosberg held the gap with Red Bull until the tyre made ??him lose ground to the point that surprisingly went to box again to put the softer compound. This option was also chosen by Vettel, who looked like losing pace compared to Kimi and Bottas.
Behind Alonso was going up to sixth, which was slowed by Kevin Magnussen in a very close and hard fight with a little maneuvering close to the legal limit. Rosberg ahead trimmed two seconds by lap to Ricciardo who was managing very well his advantage. While Grosjean and Bianchi abandoned with mechanical problems, Hamilton, who was running in 16th place after a puncture, was added to the list of recalled to complete a disastrous day, losing 18 points over his teammate and rival in the World Championship, Nico Rosberg.
Already in the final laps of this exciting raace Valtteri Bottas overtook Kimi Raikkonen for the final spot on the podium. The Finnish from Ferrari, who had a very good race, could not handle his own tyres anymore and his fellow countryman easily surpassed him. Already in the last two laps attention focused on the battle for fifth place between McLarens, Alonso and Vettel. Several exchanges of position between these drivers, with Alonso who was beaten by Vettel after trying to pass Magnussen, who caught him a little off track. Since entering the last lap, the Spaniard spent braking and broke the wing on a dumb impact with Vettel. Button eventually overtook the Ferrari, which ended in eighth place, while Vettel overtook Magnussen easily, in order to finish fifth.
Finally Ricciardo got a spectacular victory at Spa. The Australian managed to keep the distance with Rosberg, who takes 18 important championship points. Bottas returns to the podium in a great race for him, which has left Kimi Raikkonen off the podium, Ferrari driver has achieved the best result of the season by finishing fourth. Vettel and McLaren follow them, while Alonso, with a very touched car, finished in  a discreet eighth place. Sergio Perez and Kvyat close the Top10, leaving out theirs teammates.
The Great Circus of Formula 1 will return in two weeks, in Monza, foror the always amazing Italian GP.
Results: