Daniel Ricciardo has earned his second win of the season at the Hungaroring circuit in Hungary. The Red Bull has benefited from the first Safety Car and the strategy that has allowed him to beat Fernando Alonso and Lewis Hamilton on the podium. Nico Rosberg was fourth. 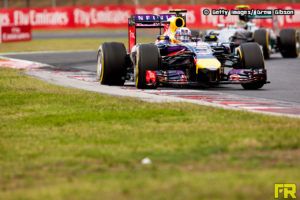 The race started with a wet track and all drivers with intermediate tyres. Kvyat would keep on his place during the parade lap, but Rosberg held the lead on the real start while Bottas was second followed by Vettel and Alonso coming into a fight for third place. Rosberg immediately grabbed a distance that made Bottas fight with Vettel.
Hamilton was unstoppable with his comeback after starting from the pit lane, he went up to the thirteenth position before the safety car appeared on track due to Marcus Ericsson accident in Turn 3. This caused the drivers made ​​their first stop chest. Everyone but Magnussen. This changed the overall standings with Ricciardo first, followed by Button, Massa, Rosberg, Magnussen, Vergne, Vettel, Alonso, Hulkenberg and Perez. The note was that everyone had gotten soft tyres but the two McLaren were still intermediate. But with the safety car on track, Romain Grosjean suffered a spin at the same place as Ericsson, which caused the abandonment of the Lotus.
The safety car left the track on lap 13, Magnussen overtook Rosberg and Alonso surpassed Vettel, who had Lewis Hamilton near him. Button was first and got the fastest lap, but problems continued for Rosberg who was overtaken by Alonso and Vergne, removing the leader of the championship in seventh place. However Button came into boxes in lap 15 and left the lead to Ricciardo who was pressured by Massa, Hulkenberg was not so lucky as he was touched by teammate Sergio “Checo” Perez.
Alonso was the fastest of the circuit and cut out the distance with Massa, but the top speed of Williams prevented the advance of Spanish. The safety car came on track for the second time on lap 22 when Perez slammed into the wall of the main straight when rolling in eighth place. Ricciardo and Williams took the opportunity to stop and box. This left the race lead to Alonso, Vergne was second with Rosberg third followed by Vettel and Hamilton in the top 5.
The green flag again on lap 26, Alonso took advantage of the escape led by a cap that made Vergne Rosberg. Seeing this, the German came into the pits to have room to increase the pace, while Vettel suffered a spin at the last corner but luckily for him not crashed into the wall. Vettel stopped a box for the next round and we took advantage to beat Hamilton Vergne and get second. The French action after a box stopped on lap 35, mid-career.
Alonso stopped on lap 38 while Hamilton did in the next lap. This put Ricciardo in the first place followed by Massa, Alonso, Hamilton, Rosberg, Bottas, Raikkonen, Vettel, Button and Vergne.
Massa stopped on lap 45, which meant that Alonso stands second and Massa sixth after his pit stop, fighting with Kimi Raikkonen.
Ricciardo stopped on lap 54 for the last time; the Australian came in fourth place, leaving the lead to Fernando Alonso. Rosberg would do the same two laps later, going down to the seventh place. The same happened to Bottas who could not keep his tyres and stopped around lap 59. But Rosberg took advantage of the situation to beat Raikkonen and Massa to move up to fourth.
Results: