Home F1 Ricciardo on how he forgot shoey on podium, does it later; tattoo... 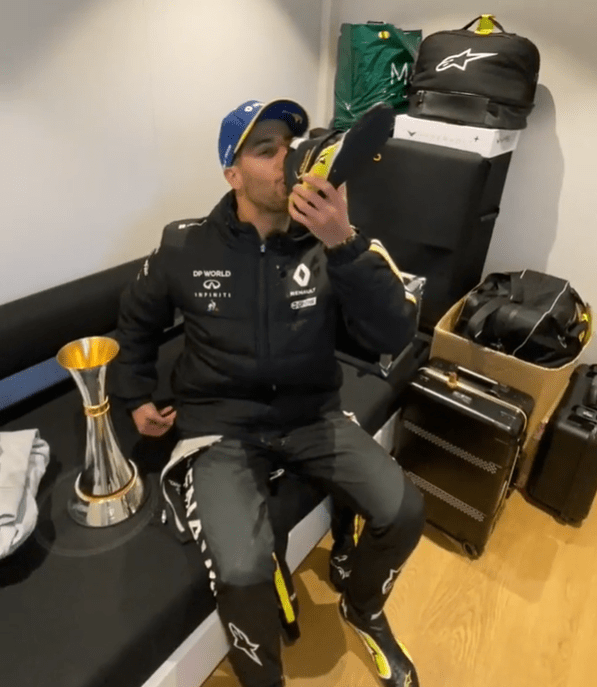 Daniel Ricciardo revealed that he forgot doing shoey after securing his first podium with Renault in F1 Eifel GP but does it later on as tattoo negotiations are on.

After the redemption victory in 2018 Monaco GP, Ricciardo has had to wait for more than two years to secure a podium in F1 Eifel GP at Nurburging, which is his first with Renault – a target he set for himself ahead of leaving the team after 2020 season.

He did have some luck with Mercedes’ Valtteri Bottas retiring along with Red Bull Racing’s Alexander Albon, but he had been close a couple of times before as well. F1 fans were waiting not only for his podium but his trademark ‘shoey’ as well.

It was not the case that he did not do it on purpose but post-race, Ricciardo admitted that he totally forgot about it on the podium. After constant remainders, he eventually did it at the motorhome and shared a video on his social media.

“Mate, this is really bad, I forgot all about it,” started Ricciardo when speaking to TV media. “I literally forgot all about it. I tell you why, as soon as we were done with champagne and Max was already spraying me, for the first time ever, they chilled the bottle, normally it is lukewarm, it was freezing or maybe it is so called outside.

“I was just shocked with cold and I didn’t even…well, I am actually sad now. But it’s all right. The podium is a long time coming and I think that’s why I forgot it as well, been two and a half years,” summed up Ricciardo.

Apart from the podium and or the shoey, another talking point from the Renault camp was the tattoo which team principal Cyril Abiteboul now has to engrave on himself as part of the bet they made at Spa-Francorchamps, which has been haunting the Frenchman ever since.

While the body part and the tattoo isn’t certain yet, Abiteboul says there will be negotiations with Ricciardo about it. “It is going happen,” said the Australian. “I want something that Cyril looks at and smiles, I’ll do some thinking and brainstorming.

“I’m sure he’s going to be excited. The first one is always a fun one. We’ll think of some things – but yeah, could be this (that is getting Nordschleife circuit engraved).” Whatever it will be, it is likely to be a small one considering Abiteboul doesn’t like them hugely.