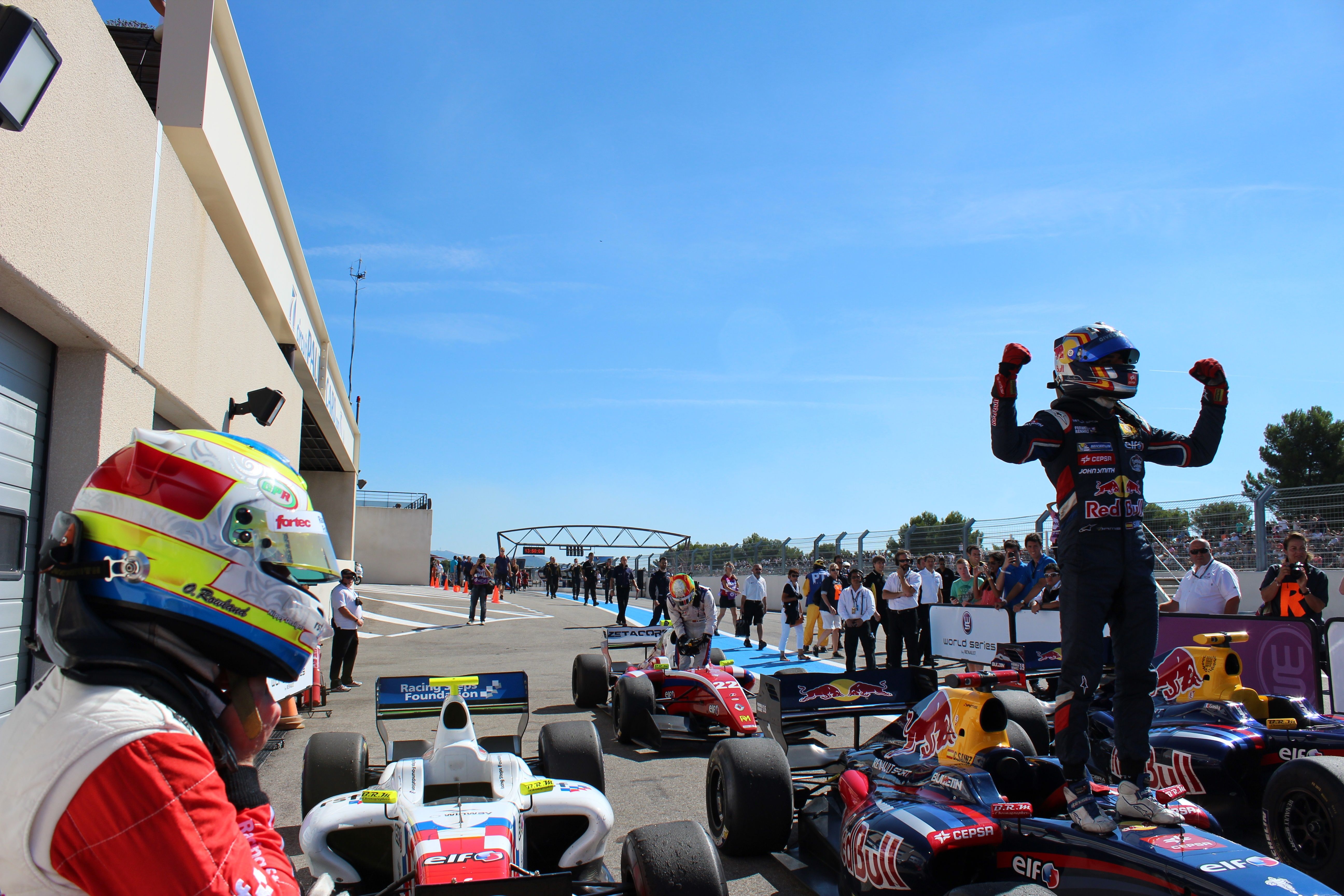 Victorious on Saturday, Carlos Sainz (DAMS) did it again on Sunday at Circuit Paul Ricard. The Red Bull Junior Team driver beat pole winner, Pierre Gasly (Arden Motorsport) and Oliver Rowland (Fortec Motorsports), who put in a fine comeback drive. With his seventh triumph of the season, a new record in the Formula Renault 3.5 Series, the Spaniard solidified his lead in the championship and now has a 44-point lead from Roberto Merhi (Zeta Corse), who finished fourth today and is now the only driver who can contest the supremacy of Carlos Sainz.

The 2013 Eurocup Formula Renault 2.0 champion, Pierre Gasly claimed his first pole position in the category at the end of a session that came to a premature conclusion following the incident of Zoel Amberg (AVF). The Frenchman was joined by Carlos Sainz to make it a 100% Red Bull Junior Team front row. Sergey Sirotkin (Fortec Motorsports), Jazeman Jaafar (ISR) and Roberto Merhi completed the top five.

When the lights went out, Carlos Sainz put in a blistering start to take the lead ahead of the Frenchman and Jazeman Jaafar. The Malay tried a passing move on Pierre Gasly, but it was Roberti Merhi who made the most of it to slide in between the two. Oliver Rowland, eighth on the grid, closely followed the leading group.

Stringing together fastest race laps, Carlos Sainz pulled away. The mandatory pit stop re-shuffled the order among the chase group. The first to stop, Oliver Rowland gained several positions and slotted in between Pierre Gasly and Roberto Merhi Jazeman Jaafar did the same, but Roberto Merhi regained his spot on lap 10.

Among the last to stop, Carlos Sainz remained unbeatable and took his seventh win, a record in the category. Pierre Gasly and Oliver Rowland joined him on the podium. Roberto Merhi finished fourth, ahead of Jazeman Jaafar, Matthieu Vaxiviere (Lotus), Sergey Sirotkin and Will Stevens (Strakka Racing). Nicholas Latifi (Tech 1 Racing) and William Buller (Arden Motorsport) completed the top ten.

Carlos Sainz: “It was a perfect race. After the tricky qualifying session because of the red flag, I knew I had to get a good start and that was the case even though Pierre also got off the line well. The first corner was tricky as well, but I somehow managed to stay in front. The first stint was very fast. The team made the right decision at the right moment bringing me in late, although I did worry about a safety car. They did a great job and I just had to bring it home.”

Pierre Gasly: To get another podium finish is a good result, although I am disappointed not to have confirmed my pole position. We have to be happy with it as it was a tough race. When I went wide at the first corner, the marbles prevented me from pushing; then I was held up during the pit stop. I thought I lost a lot, but it went okay although I did have to fight with Oliver.”

Oliver Rowland: To finish third is a good thing considering my spot on the grid. I wasn’t really satisfied with my qualifying result and I knew that I would have to use one of my tyres from yesterday following my puncture. I had good pace, I catched up to Pierre, but the tyre degradation was too much at the end of the race and it was kind of nice damage limitation!”