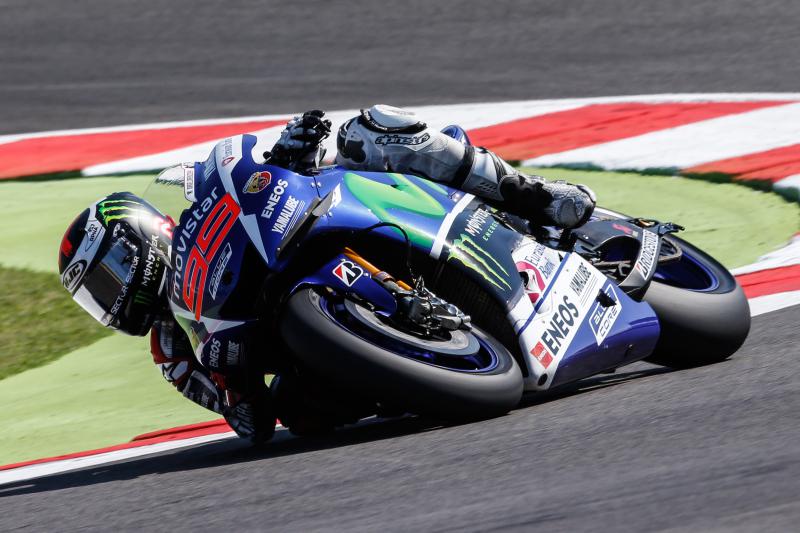 For the fourth race in a row it was Movistar Yamaha’s Jorge Lorenzo and Repsol Honda’s Marc Marquez who topped the combined timesheets on Friday. This time it was Lorenzo who finished on top of the pile as the Spaniard took advantage of the new track surface and glorious conditions (Track temperatures reached 38?C) to set the fastest ever lap by a motorcycle around the 4.2km Misano World Circuit Marco Simoncelli.

Lorenzo set a 1’32.871 in FP2 whilst utilising a medium front and medium rear tyre on a day that saw nearly all riders improve in the warmer conditions of the afternoon. The Majorcan –  who is currently second in the championship standings – broke Marquez’s 2013 Pole Record in the process (1’32.915). FP2 also saw Lorenzo debut ‘winglets’ on his Yamaha M1 and they seemed to have a positive affect as he immediately went quicker.

Lorenzo ended the day just 0.053s ahead of Marquez, who had earlier topped FP1. Marquez preferred a hard front and hard rear combination for his flying laps at the end of FP2 in a session that once again saw he and Lorenzo a cut above the rest.

Repsol Honda’s Dani Pedrosa (+0.387s) completed the provisional front row but was over three-tenths off the pace of his teammate Marquez. Andrea Dovizioso (+0.420s) on the Ducati Team GP15 was in fourth ahead of the man who leads the championship standings by 12 points, Valentino Rossi (+0.598s). Rossi did not sport the ‘winglets’ on his M1, but expect to see them make an appearance in FP3 as he preferred a hard front and rear tyre combination like Marquez.

Monster Yamaha Tech 3’s Pol Espargaro (+0.681s) was the leading Satellite rider in 6th, just one-thousandth of a second ahead of the Octo Pramac Racing Ducati of Danilo Petrucci.

EG 0,0 Marc VDS rider Scott Redding was 11th with Aleix Espargaro (Team Suzuki Ecstar) in 12th less than a second behind Lorenzo, while Andrea Iannone (Ducati Team) had to settle for 13th after also crashing during the session.

FP3 kicks off at 9:55am local time on Saturday in Misano.