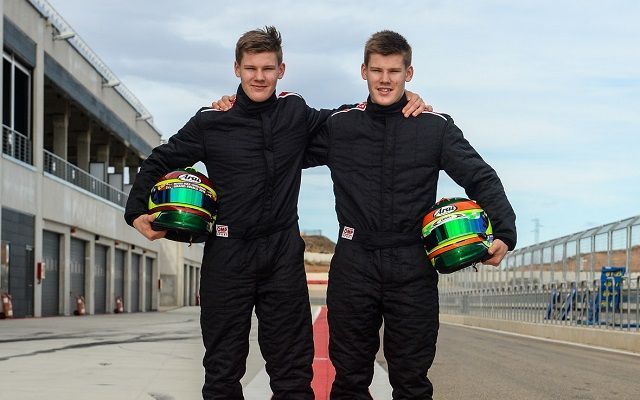 You don’t come across twins everyday, let alone identical twins, and even less when they are both racing. The eighteen years old brothers are dressing the same way, wearing the same cheeky smile, nursing the same just-got-out-of-bed hairstyle and built in the same broad-shoulder type way.

“It is easy, Roope has orange on his helmet and I have red”, commented Rasmus Markkanen. Or was it Roope? No, Rasmus, it was definitely Rasmus. Anyway, here lies the struggle…

After few days of test, it is still impossible for any team member to recognize the Markkanens Bros and even their times on screen are almost identical.
The brothers themselves can not find any difference between them, however after long minutes trying to think about it, Rasmus finally said “I might be a bit more patient than Roope”.

Both brothers visited a karting track when they were seven years old and since then decided that motorsport was what they wanted to perform in. After years in competing on the highest levels of karting, the brothers decided to step in the single-seater world and their choice naturally stopped on the SMP F4 NEZ Championship.

« It is a great opportunity to be part of a such a high level competition series – as the SMP F4 NEZ Championship will be in 2016. Our long-term work and successful years of competing in the Rotax Karting series in Finland and in Europe has built a strong base and taught us the fighting spirit. Stepping from karting to Formula cars is a huge step, which will bring a whole lot of new challenges.

We brothers have always had the genuine desire to make the best out of any commitment we are taking. And indeed we both have the strongest will to succeed. Even as by now we have only six test days behind us, the F4 car has become familiar to us and we achieved good test results as well managed to gather precious experience all along the way.

Koiranen GP has convinced us with their professional approach, goal-oriented way of working, extremely skilled staff and the motivating atmosphere – all clearly based to years of experience in racing. We the “Racing Twins” are proud and privileged to be part of the Team », commented Rasmus and Roope Markkanen.

Next stop for the brothers will be in few days for another couple of testdays in Navarra, Spain, getting ready to face the 2016 SMP F4 NEZ Championship starting grid which should be a very interesting one this season.