Home F1 Raikkonen: ‘Not much I could do’ as Russell left frustated, takes it... 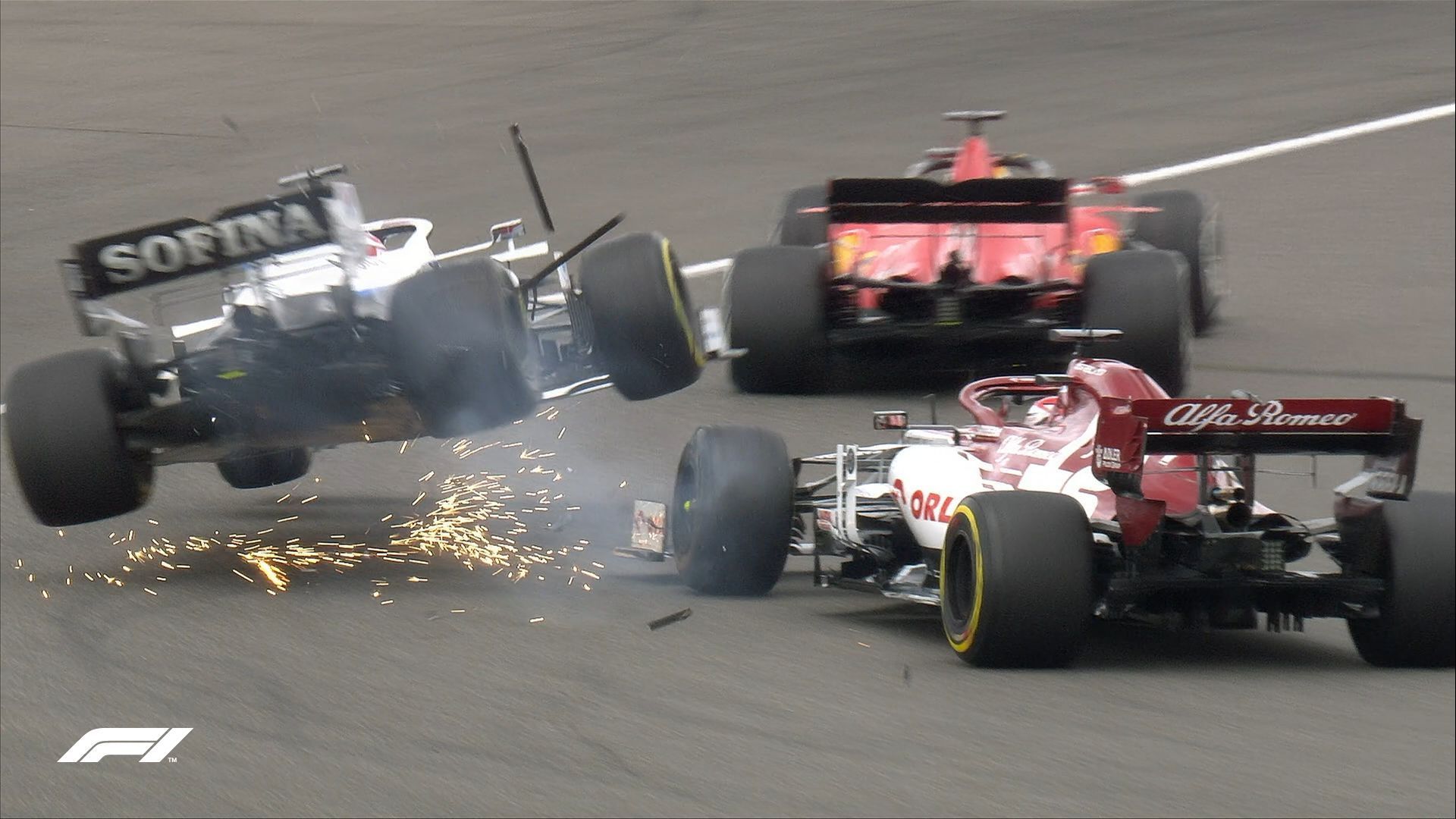 Kimi Raikkonen felt he could have nothing in F1 Eifel GP to prevent clash with George Russell, who was frustrated but took it as racing.

For Russell, the F1 Eifel GP was a short-lived endeavor, only lasting 14 laps. The Williams driver ran well before pitting around the 12th lap, after which the early laps of his medium-tyre stint were the last he ran before his race ended with contact.

Said contact came after Alfa Romeo’s Raikkonen arrived on the scene of a battle between Russell and Ferrari’s Sebastian Vettel, the former of whom trailed the latter as they approached turn one – the German was thrown at the back due to his own spin.

Into the tight turn, Raikkonen ran deep, pulling alongside Russell. From here, a snap of oversteer sealed for the Finn their respective fates, as he careened into the side of the Williams car, snagging its right-rear tyre, and threatening to role the car entirely.

Ultimately, this did not come to fruition, as instead a forceful impact on the FW43’s left rear tyre as the car came back down to the ground caused a puncture, which would later force Russell to retire – another disappointing end to his race.

“I overtook Sebastian in the corner before the chicane and then he got the exit – he got the DRS and passed me which I don’t think was shown on TV,” a somewhat deflated Russell began to explain. “I just watched the video and Kimi lost it, and clobbered us, which obviously damaged the car and gave us a puncture.

“There was too much damage to bring it home so we retired. It’s racing, we’re all pushing hard, and it’s not easy sometimes. Up until then, the car was feeling was good and we were on pace with the guys around us. We were on a slightly different strategy to those we were racing, so there were opportunities there.

“We were racing Hulkenberg and the Alpha Tauri’s around. Definitely is a shame because the way that this race has panned out, with all those front and mid-field cars retiring, there was definitely an opportunity there,” summed up Russell, who is now last in the standings.

Offering his perspective, albeit doing very little more than that, Raikkonen added of the incident, “We touched each other and that’s it,” he said. “We were all together and I think I locked the rears a little bit and got sideways – not much I could do.

“For sure it was not the most we could do but that’s what we got. Not a great weekend, neither on Saturday nor Sunday. We know if we get it wrong on Saturday it’s going to hurt us on Sunday, but that’s how it is. It wasn’t the greatest weekend, but after qualifying we knew we’d have a difficult job on our hands.

“The start of the race was OK, but then I had to avoid some cars ahead of me and I lost a lot of places. We could have been a bit ahead but the Safety Car cost us a few positions and the end result wasn’t great. It was a frustrating weekend,” summed up Raikkonen, who ended up 12th, whereas teammate Antonio Giovinazzi was ninth.

Here’s the full video of the clash: https://www.formula1.com/en/video/2020/10/2020_Eifel_Grand_Prix__Spectacular_crash_as_Raikkonen_hits_Russell.html