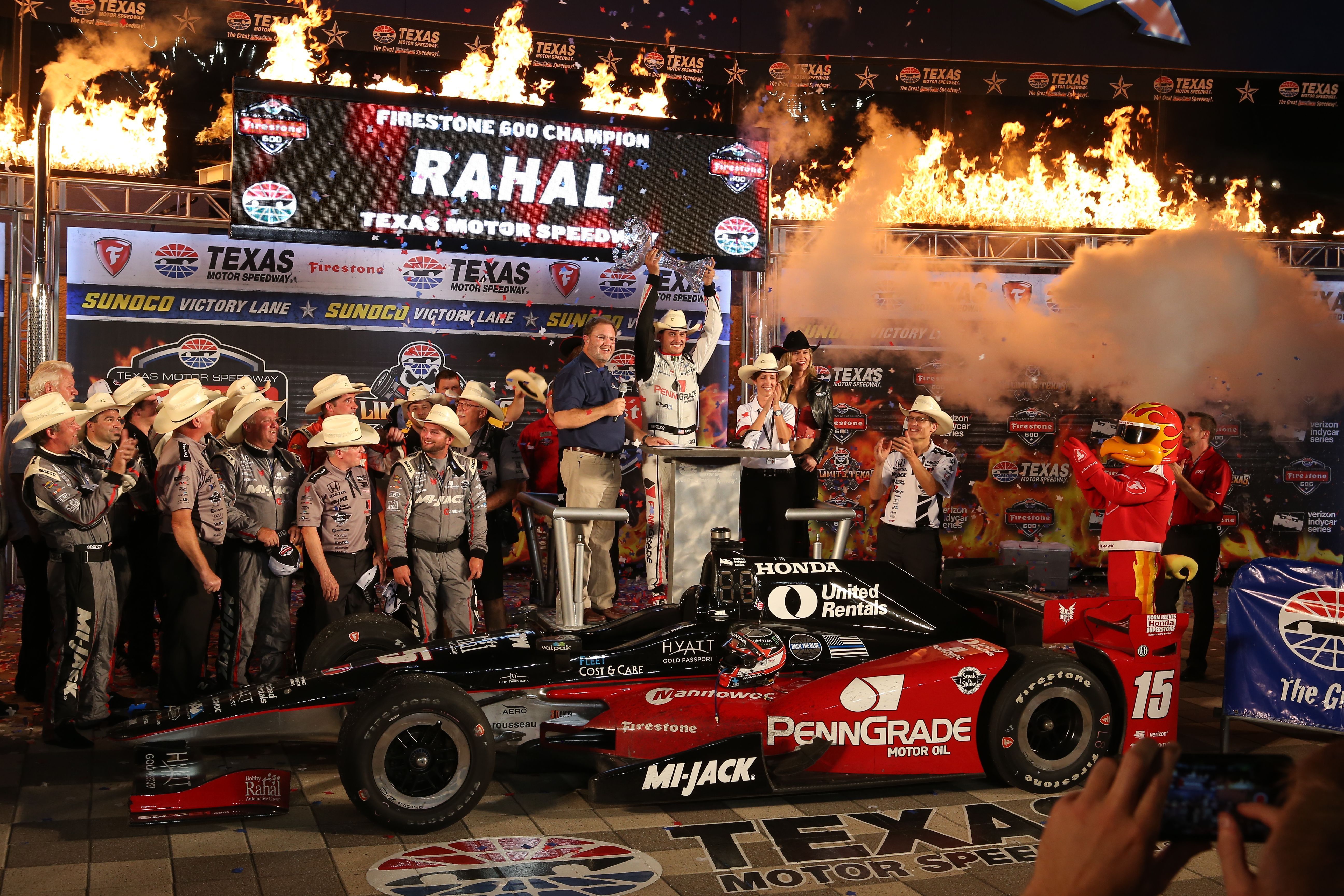 Graham Rahal celebrated at Texas Motor Speedway as the Verizon IndyCar Series completed the Firestone 600 that was suspended due to rain in June. The photo-finish victory ahead of James Hinchcliffe was the first season victory for Rahal and the Rahal Letterman Lanigan Racing team.

After three laps behind the pace car, the race restarted on lap 75 with James Hinchcliffe leading the field. Ryan Hunter-Reay and Will Power overtook Hinchcliffe during the first lap back under green. Hinchcliffe made it quickly past Power to second place and after some ten laps of two-wide racing against Hunter-Reay, he claimed the lead of the race.

Hinchcliffe led the race until his first stop after the restart on lap 121. The last driver to pit, Hinchcliffe rejoined in second place, behind Helio Castroneves who had pitted nine laps earlier. Castroneves led seven laps before Hinchcliffe passed him for the lead.

Castroneves was struggling to make his tires last and he was overtaken by Graham Rahal and Ed Carpenter before his second stop on lap 146. Hinchcliffe meanwhile was again able to stay out longer and was the last make the second stop, on lap 163. Despite having stayed out with old tires, Hinchcliffe was able to retain the lead after his stop, rejoining ahead of Carpenter.

Hinchcliffe made his third stop after the restart on lap 207, rejoining in the lead ahead of Carpenter who had pitted a lap earlier. Six laps later, the first caution of the day came out as Carpenter had contact with the lapped  who crashed at Turn 1.

The race restarted on lap 220 with 28 laps to go. Carpenter passed Hinchcliffe for the lead before Hinchcliffe claimed the lead again.

The next caution came only after three laps under green as Ed Carpenter, in his last race of the season, crashed from second place. Carpenter also damaged Helio Castroneves’s car, though fortunately for Castroneves there were only five cars on the lead lap.

The race went under green again with 18 laps to go. Hinchcliffe led the field ahead of Tony Kanaan, Graham Rahal, Mikhail Aleshin, and Castroneves. The green run lasted only two laps before Aleshin spun and Jack Hawksworth crashed into his car.

During the two laps under green, the championship leader Simon Pagenaud had unlapped himself and joined into the lead battle. Tony Kanaan came to pits with 12 laps to go for fresh tires for the final shootout. The race restarted with eight laps to go, with Hinchcliffe leading ahead of Rahal, Castroneves, Kanaan, and Pagenaud.

The final laps saw close racing between Hinchcliffe, Rahal, Kanaan, and Pagenaud, with Hinchcliffe leading until the final lap. Then on the final lap, Rahal made the winning move and dived inside Hinchcliffe into Turn 3 to overtake him. Although Hinchcliffe got a good run from the Turn 4, Rahal was able to cross the finish line first by 0.0080 seconds to Hinchcliffe to achieve his first season victory and score a 1-2 for Honda-powered cars. Kanaan finished in third place, just 0.0903 seconds behind the winner Rahal.

The Verizon IndyCar Series leader Pagenaud brought his car home in fourth place, 0.4773 seconds from Rahal. It was an important result for the Frenchman as he gained eight points on his closest rival, Team Penske teammate Will Power who finished eighth. The gap between the two is now 28 points while the third-placed Kanaan is already 113 points behind Pagenaud.

Full results of the Firestone 600 here.