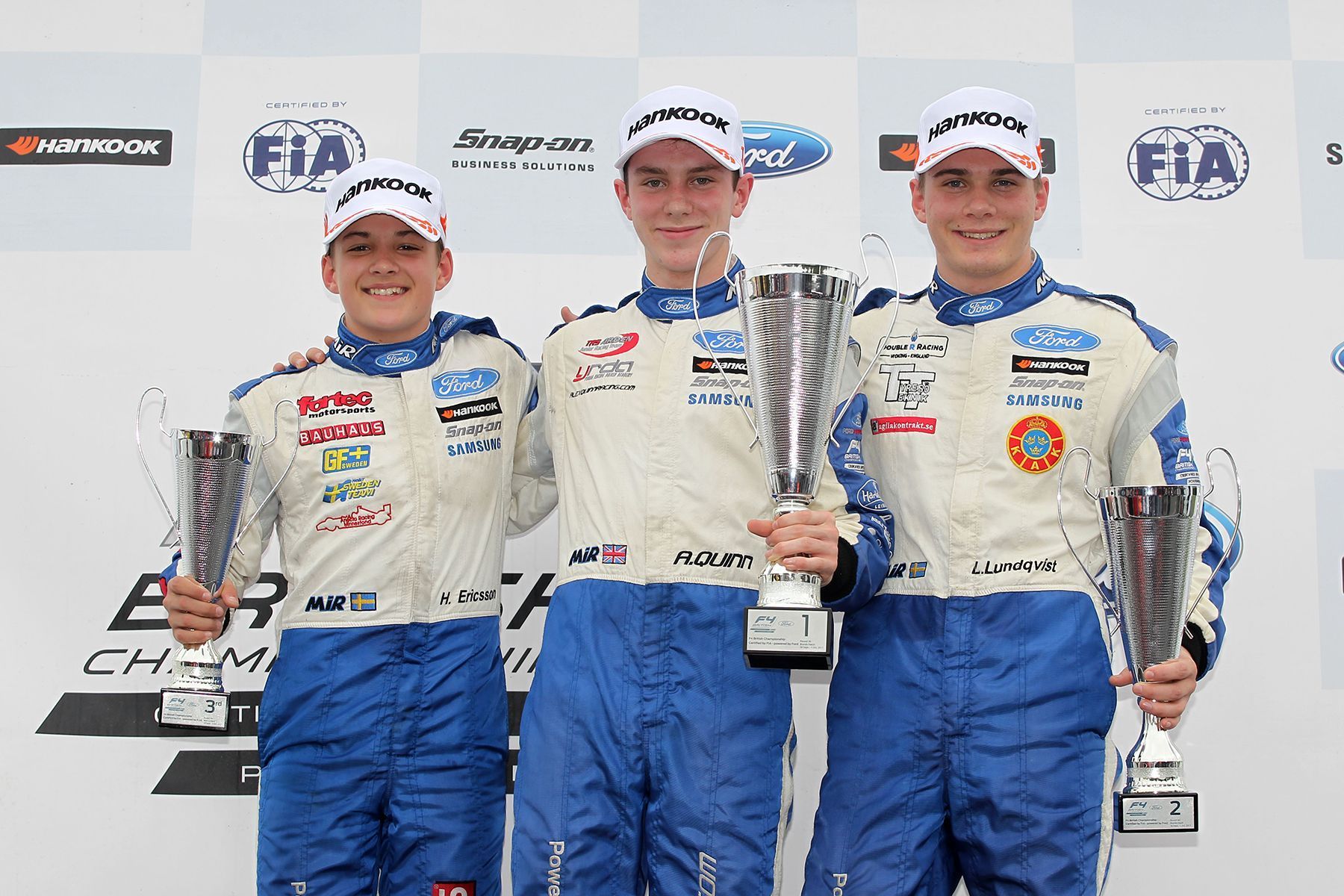 TRS Arden and Alex Quinn seized the opportunity from pole to wrap up the 2017 F4 British Championship certified by FIA – powered by Ford EcoBoost on a high at Brands Hatch with victory in the season finale. Fortec Motorsports and Hampus Ericsson had plenty to celebrate too, after an inspired drive from the Swede to clinch the Ford F4 Challenge Cup and with it free entry to the 2018 F4 British Championship (worth £15,000).

Quinn was made to work hard for victory by fellow front row starter Double R Racing’s Linus Lundqvist. The pair were side by side into turn one, with Quinn doing enough to boldly hold on to the lead.

Lundqvist appeared the faster of the two in the early stages, his tyres coming up to temperature quicker and the Swede put Quinn under considerable pressure.

Quinn weathered the storm, finding a rhythm as the race progressed, enabling him to pull out a gap to Lundqvist. A gap that would stand at 2.380s at the chequer and see Quinn overtake Lundvist for fourth in the standings by just half a point.

“Win number four the season feels so good,” said Quinn. “The second half of the race was really enjoyable when I was pulling away out front from Lundqvist.

“This was a really important race for me because I wanted to end the season on a high. After the disappointment of yesterday, other than qualifying on pole for this race, it’s great to bounce back like this.

“My time in British F4 has helped me improve as a driver massively and it’s been crucial in my career. I raced in British F3 last weekend and the step is huge.

“I would not recommend any driver go from karting to F3, but I would strongly recommend any young driver to make their first step into single-seaters with British F4. It prepares you perfectly for the categories further up the motorsport ladder.

“The F4 British Championship is an ideal way to transition into racing cars and a brilliant stepping stone for any aspiring professional racer.”

“I nearly got another win,” said Lundqvist. “Coming second today and winning a race yesterday makes for a pretty good weekend overall. Losing fourth place to Quinn in the standings by half a point is a bit frustrating though.

“With us starting alongside each other on the front row, the stage was set for a battle. We were side by side into turn one and it was a case of whoever came out in front would likely take the victory and fourth in the championship.

“I have no doubt that this year in British F4 has provided me with the perfect foundation to progress up the FIA single-seater pyramid.

“I’ve shown really strong pace all year. Although the standings might not show it due to the bad luck we’ve encountered, we have been one the front-runners in this championship.

“Five wins is still a great tally for the season. Nine fastest laps, more than any other driver, is also an achievement I’m very proud of.

“It’s great to see fellow Swede Hampus Ericsson get the Ford F4 Challenge Cup title. Many congratulations to him. Hopefully it will provide the springboard for him to fight for the British F4 title in 2018. I think both of us have represented Sweden well this year in the most competitive junior single-seater series.”

There was drama at the start with contact between Lucca Allen and Harry Webb ending the races of both drivers, as well as effectively ending Webb’s Ford F4 Challenge Cup bid.

It was a frustrating end to the campaign for the Richardson Racing driver who came into the final race of the season with every chance of taking the Ford F4 Challenge Cup title after building a nine point lead over Saturday’s two races.

Although the job may have been made much easier for Ericsson, the Swede was far from content with just carefully bringing his car home.

Determined to take the title in style he put on a supreme display of wheel-to-wheel driving with some excellent overtakes to equal his best result of the year; a third place finish having started seventh.

Ericsson was promoted to the podium spot in the latter stages following Logan Sargeant’s uncharacteristic error which sent the American out of the race and with it his chances of becoming vice champion.

Third place saw Ericsson beat Olli Caldwell to the top step of the rostrum and ensure his ninth Class win of the campaign; more than any other driver.

“It was a really good race and I’m so happy with my performance,” said an ecstatic Ericsson. “To secure the Ford F4 Challenge Cup with a win in the Class is special.

“I didn’t know Webb had retired. I just focused on doing my own race and working my way up the order to get on the podium.

“My brother Marcus phoned me from Malaysia before the Grand Prix. He said to just focus on my race and not worry about anything else or overthink things. That’s exactly what I did and now I’m standing here as Ford F4 Challenge Cup champion!

“My first race of the season at Donington Park in April was the hardest one and since then I have just got better and better. To end the season with a third place overall is fantastic too.

“Now I can say I won the Challenge Cup in British F4 in my rookie season and that’s something I’m so proud of. I can build on this success to reach greater heights in my career. I want to come back next year and fight for the British F4 title.”

The accolade of vice champion went to fifth-place finisher Oscar Piastri following a superb season which saw him take to the podium 15 times, including six victories. The TRS Arden Aussie has thrilled fans in 2017, marrying speed with consistency, and firmly signalled to the single-seater fraternity that he is a star of the future.

Piastri found himself sandwiched on the final race classification between the Carlin duo of Patrik Pasma and 2017 FIA British Formula 4 Champion Jamie Caroline. The former making up four places during proceedings, meanwhile Caroline slowed dramatically as he crossed the finish line costing him a fourth place finish.