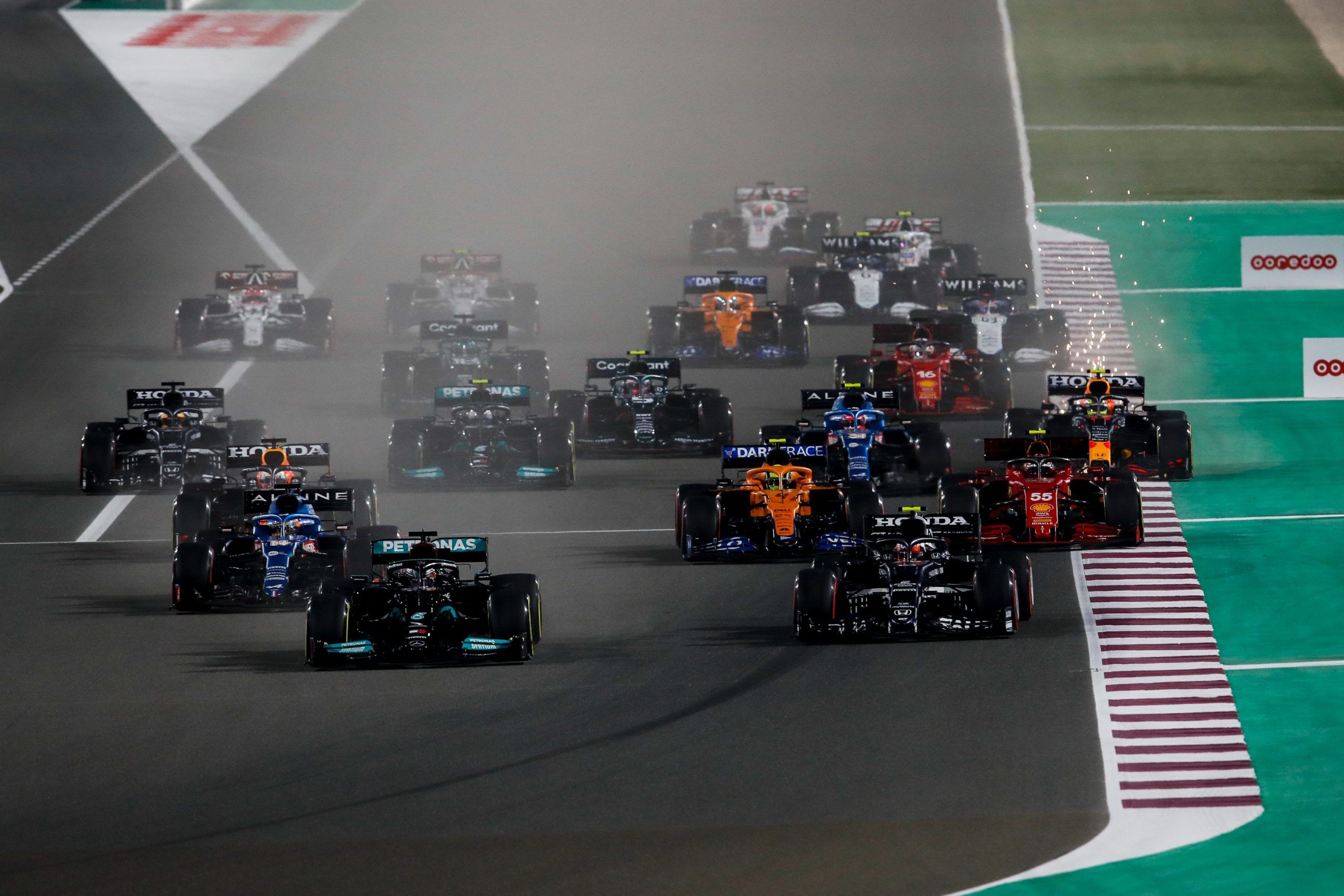 Pole-sitter Lewis Hamilton made a good start in F1 Qatar GP abode his Mercedes as Alpine’s Fernando Alonso cleared AlphaTauri’s Pierre Gasly to take second, with Red Bull’s Max Verstappen moving up to fourth after starting from seventh due to penalty.

The Finn had a slow start to drop back as the Mexican had a good one to make up two places. At the front, Hamilton started to build a gap as a wide moment from Gasly allowed Verstappen to take third. It is unclear if there was a coded message for the Frenchman.

Before the moment, Gasly was told that Verstappen was not his race. The Dutchman, meanwhile, wasted no time to clear Alonso and take second. Behind the pack, there was supreme action as Perez started to make moves on multiple drivers.

He cleared Tsunoda at ease but had to fight against Sainz for track position. He then got through Ocon and Norris to be fifth and eventually was fourth after a pit stop for Gasly. It was a slower fightback from Bottas but once he got in, he started to pull away.

He was in a bit of fight against Stroll and Tsunoda where the Japanese lost two places at one go at Turn 1 with the Canadian on the left and the Finn on the inside. The Mercedes driver then got through the Aston Martin driver soon enough.

He also had to work on Sainz for track position but got through Ocon to be fifth before getting stuck behind Norris. The pit stop game started early with Verstappen stopping at Turn 18 for the hard tyres as Hamilton followed him on Lap 19 for the same compound.

Interestingly, Perez was stopped a lap later and dropped to 12th after a slower stop. He had to fight Aston Martin’s Sebastian Vettel the hard way after the German was recovering from a bad start to drop to the back of the grid.

Alonso pitted for the hard tyres pretty late in the race as he was in direct fight for third against Perez and Bottas, where the Finn also decided to go even deeper in the race. He did get by Norris for third after which the Brit pitted to drop behind Gasly.

As Hamilton and Verstappen traded lap times between them, it was disaster for Bottas after Mercedes kept him out on his first set of medium tyres for 33 laps. The Finn suffered a puncture and had to go around the circuit to finally pit.

He not only had to change the tyres but also the front wing which was a big blow for Mercedes in the constructors’ fight. Pirelli gave about 30 laps for the mediums and Bottas did three more laps. Haas’ Nikita Mazepin did 31 laps before pitting.

The mistake dropped Bottas to 13th as Perez seemingly secured third from Alonso and Norris in the Top 5. The second stop for others was kicked-off by Gasly and co. Verstappen got in on Lap 41 with Perez and Hamilton following him on the next one.

It was tricky for Perez as he dropped to seventh and had to get through four cars to get back to third. He cleared Stroll and had to fight Ocon for fifth as Norris pitted to safeguard his tyres with a double front-left failure on the Williams car.

It was Russell to retire first and then Latifi with the Canadian having to stop on track eventually. At the same time, Bottas retired due to problems with his car as Alonso tried to hung on to third from Perez who build a good gap to Ocon in fifth.

The Frenchman had to defend from Stroll, Sainz and Leclerc with Norris in ninth at a distant from Vettel. A late VSC period to clear Latifi’s car helped everyone on the one-stopper as Hamilton took the win in Qatar GP and close-up on the F1 title fight.

Verstappen pitted for the soft tyre to take the fastest lap and finish second as Alonso had a sigh of relief to end up third and his first F1 podium since his return to the sport. Perez had to be content with fourth with Ocon making it a double Top 5 for Alpine.

The Frenchman fended off Stroll, Sainz and Leclerc on the last lap, with Norris and Vettel rounding out the Top 10. The Brit seemingly had vibrations and to avoid any trouble, he had to pit which cost him not only places but points as well.

Having started on the front row, Gasly could only manage 11th with Ricciardo 12th from Tsunoda and the Alfa Romeo pair where Kimi Raikkonen led Antonio Giovinazzi. Despite a late wide moment, Haas’ Mick Schumacher was 16th in the end.

Russell saw the chequered flag in 17th as Haas’ Nikita Mazepin was 18th with everyone from Norris onward ended up a lap behind the leaders where Russell and Mazepin were two laps on the leaders.

#F1 #QatarGP Race results with an awesome race from @alo_oficial !! Driver of the day and 3rd in the race. His last podium is 105 races ago. @LewisHamilton wins with @Max33Verstappen taking 2nd and fastest lap. #MsportXtra pic.twitter.com/5lwH85V818