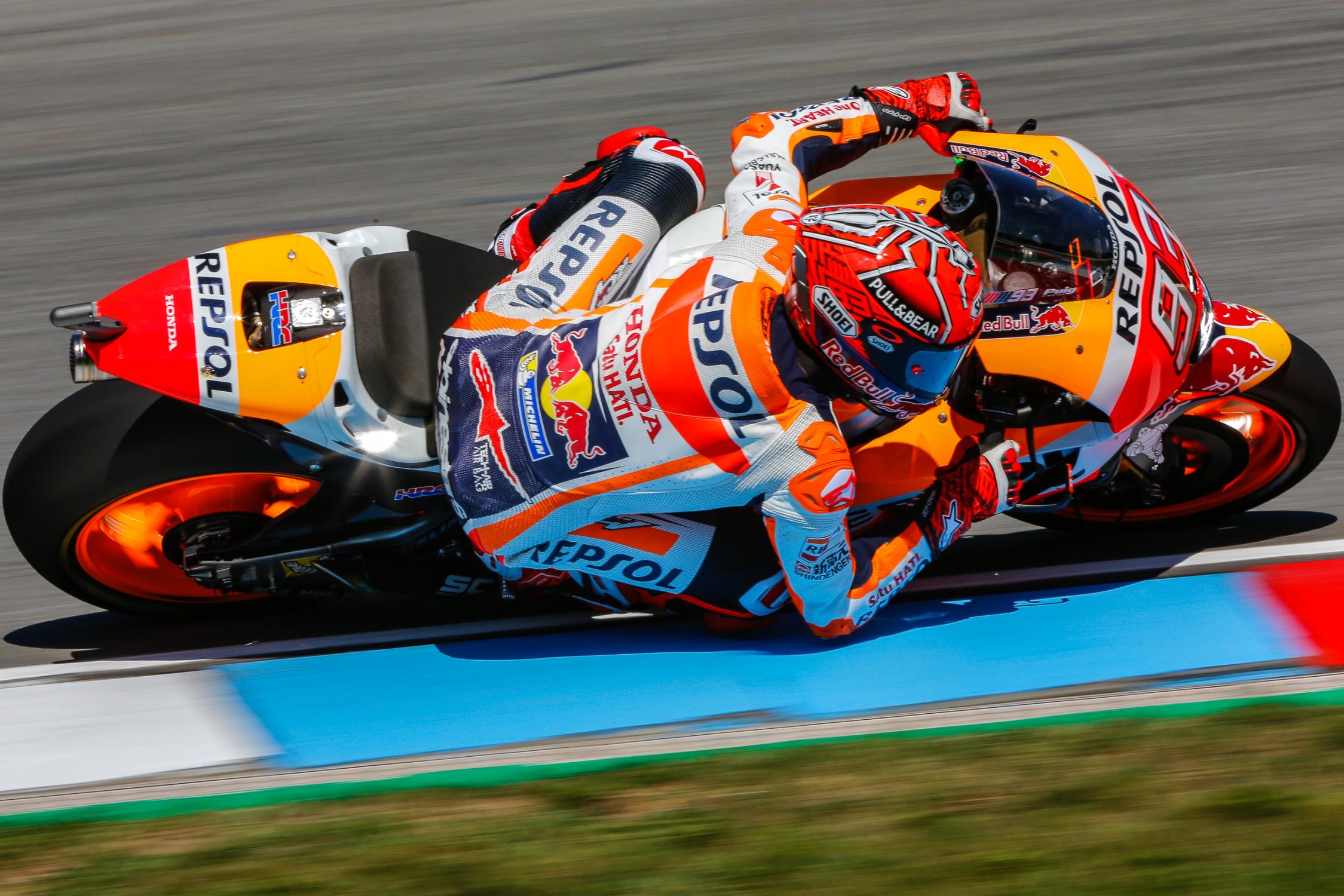 The race was declared wet, which gave the drivers open window to pit for bike change. Marc Marquez (Repsol Honda Team)  had a great start, closely followed by Jorge Lorenzo (Ducati Team), Valentino Rossi (Movistar Yamaha MotoGP) and Andrea Dovisiozo (Ducati Team). Jorge Lorenzo looking very confident on the bike, snatching the lead from Marquez after the first few corners. Ducati seeming the best in these conditions with Jorge Lorenzo in the lead and Andrea Dovisiozo in 3rd.

On the second lap Marc Marquez seemed to be losing momentum, the Spaniard was the only driver on the grid to start with the soft rear tyre. He strands in 10th after the second lap, both honda’s seeming to struggle with Dani Pedrosa further back as well. Marc Marquez immediately reacts and dives into the pits as first for a bike change, opting for medium tyres for both front and rear. As Aleix Espargaro (April Racing Team Gresini) and Andrea Iannone (Team Suzuki Ecstar) collide in the pits, the stewards investigate the incident and conclude it was an unsafe release for the Catalan. Aleix is given a 3 place penalty.

Out on track, Valentino Rossi leads a group of thirtheen that are yet to pit for a bike change. While all the others pit; Valentino Rossi, Johan Zarco (Monster Yamaha Tech 3) and Andrea Dovisiozo incomprehensively decide to stay on track. Marc Marquez quickly makes them regret their decision by going 10 seconds quicker than everyone.

Scott Redding (OCTO Pramac Racing), who started last, is now in second after making the right call to pit early. The changing condition make for a surprising fight as he is closely followed by Aleix Espargaro, Dani Pedrosa, Karel Abraham (Pull&Bear Aspar Team) and Danilo Petrucci (OCTO Pramac Racing), all fighting for the remaining podium spots. Dani Pedrosa being the quickest of the bunch, easily finding his way through the field to land in second position.

Valentino Rossi finally seems to have found his rhythm, being quicker than Marquez in the lead. The Italian fighting his way through the field now in 9th, followed by Dovisiozo. There are fights at all levels of the field, Danilo Petrucci, Aleix Espargaro and Cal Crutchlow (LCR Honda) are in the fight for the last podium spot, as Maverick Viñales (Movistar Yamaha MotoGP) and Scott Redding close in on the group to join the battle. Slowly, but surely, Valentino Rossi and Andrea Dovisiozo get back to the front runners to respectively secure 4th and 6th in the end.

Marc Marquez dominates in Brno taking his 150th podium and extending his lead in the championship.