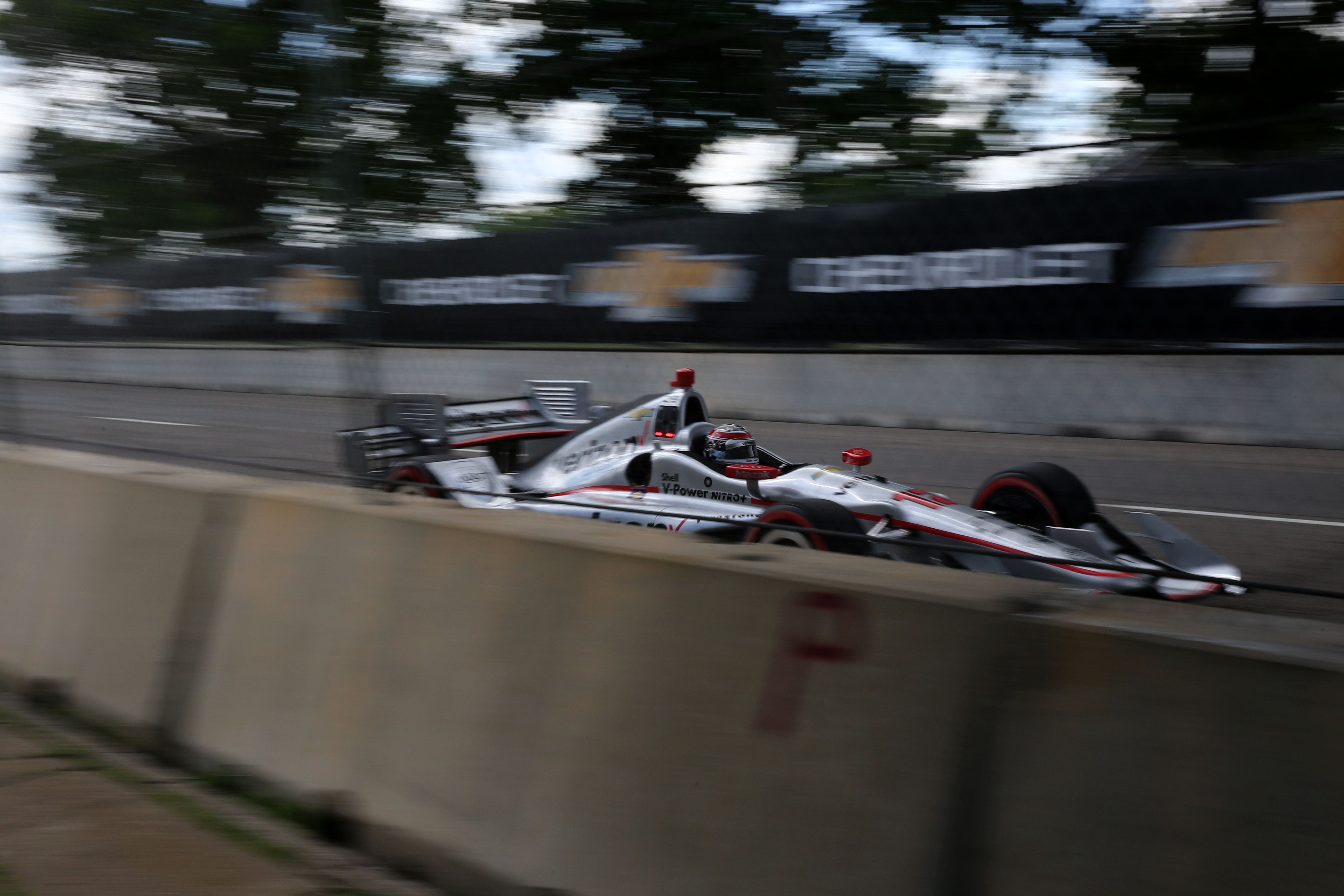 Team Penske’s Will Power saw his pole-winning lap for Race 2 at the Chevrolet Dual in Detroit presented by Quicken Loans disallowed in qualifying this morning, but that wouldn’t deter the Australian from winning the second race of the doubleheader weekend this afternoon for his 26th career Indy car victory.

Driving the No. 12 Verizon Team Penske Chevrolet at the race organized by his boss, Roger Penske, Power finished 0.9203 of a second ahead of teammate Simon Pagenaud after 70 laps on the 2.35-mile temporary street course.

Pagenaud, in the No. 22 Hewlett Packard Enterprise Chevrolet, retained his championship lead at the midpoint of the Verizon IndyCar Series schedule. Unofficially, he has tallied 357 points and holds an 80-point advantage over Scott Dixon, who finished fifth today in the No. 9 Target Chip Ganassi Racing Chevrolet.

For several drivers, the Raceway at Belle Isle Park’s concrete walls were far from friendly and it didn’t take long for the damage report to be started. A chain-reaction incident at the green flag ruined several drivers’ days, including James Hinchcliffe (No. 5 Arrow Schmidt Peterson Honda) and Max Chilton (No. 8 Gallagher Chip Ganassi Racing Chevrolet), who both found the barriers in Saturday Race 1 as well. Those two would retire, but the No. 14 of Takuma Sato (ABC Supply AJ Foyt Racing Honda) and the No. 27 of Marco Andretti (United Fiber & Data Andretti Autosport Honda) continued.

At the restart, pole sitter Pagenaud extended his lead over Ryan Hunter-Reay, but the contenders behind battled hard. On Lap 23, Juan Pablo Montoya (No. 2 Verizon Team Penske Chevrolet), who had been climbing through the field, made contact with Dixon, cutting Dixon’s right rear tire and damaging Dixon’s read wing and Montoya’s own front wing.

Looking to shake up the standings like he did Saturday, Race 1 winner Sebastien Bourdais pitted on Lap 12 in the No. 11 Team Hydroxycut – KVSH Racing Chevrolet. When the leaders ran through their first pit cycle, the four-time Indy car champion emerged in third place, nine spots up from his 12th-place starting position.

Shortly after making his second pit stop on Lap 34, Montoya found the wall at the exit of Turn 8, continued on, and spun into the barrier at Turn 10, ending his day and bringing out the second caution of the day.

After the Lap 39 restart, Helio Castroneves made his move in the No. 3 Hitachi Team Penske Chevrolet. The three-time Belle Isle winner overtook Pagenaud for the lead, as it seemed that the Brazilian would be on the way to his first Verizon IndyCar Series win in two years when fate played a hand.

In the middle of final pit stops for several of the leaders, Jack Hawksworth (No. 41 ABC Supply AJ Foyt Racing Honda) stopped on track due to a mechanical failure, bringing out the third caution of the race. Power, Pagenaud, Ryan Hunter-Reay and Dixon had just stopped for fuel and tires. Forced to pit under the caution, Castroneves dropped from contention and finished 14th.

Bourdais, running off strategy with Charlie Kimball (No. 83 Tresiba Chevrolet), Graham Rahal (No. 15 United Rentals Honda) and Alexander Rossi (No. 98 NAPA Auto Parts Honda), emerged with the lead over the caution period, but the front four all had to make late stops for fuel, handing the lead to Will Power.

With Pagenaud trying to track him down, Power would not put a wheel wrong in the waning laps, and scored his first win since the 2015 Angie’s List Grand Prix of Indianapolis. Pagenaud finished runner-up, followed by the No. 28 DHL of Hunter-Reay.

There is little rest for the Verizon IndyCar Series, as the 16-race calendar enters its second half June 10-11 on the high banks of Texas Motor Speedway for the Firestone 600. Qualifying coverage on NBCSN begins at 6 p.m. ET Friday and race coverage on NBCSN starts at 8 p.m. Saturday. Radio coverage of the 248-lap contest can also be found on the Advance Auto Parts INDYCAR Radio Network.