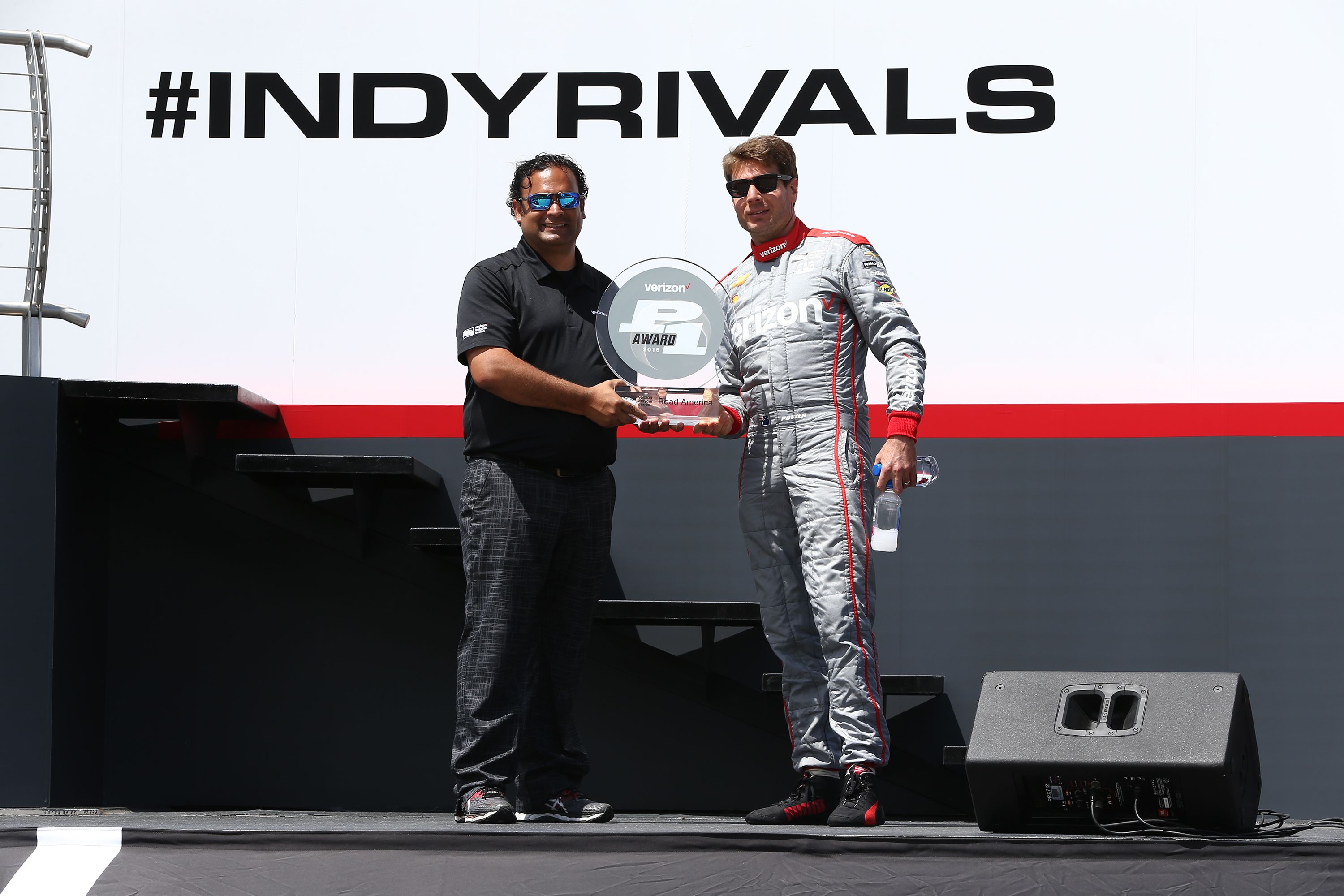 Will Power dominated the KOHLER Grand Prix as the Verizon IndyCar Series returned to Road America, even though a late-race caution allowed Tony Kanaan of Chip Ganassi Racing to challenge for the victory on the final laps. Teammates of those two, Simon Pagenaud and Scott Dixon came to Road America as the top two of the series points, yet both suffered mechanical issues.

The polesitter Will Power led the race from the green flag and lost the lead only during pit stops. During the first laps he was closely followed by Scott Dixon; however an engine issue in the Chevrolet-powered No. 9 Ganassi machine forced Dixon to retire from the race on lap 7.

With Dixon out of the race, his Ganassi teammate Tony Kanaan was running second. Graham Rahal of Rahal Letterman Lanigan Racing made it into third place by overtaking the championship leader Simon Pagenaud of Penske on lap 9. Rahal leaped past Kanaan during the first round of pit stops but Kanaan claimed back the second place with a great overtake heading into Canada Corner.

Rahal leaped past Kanaan also during the second round of stops, exiting the pits just ahead of the Ganassi driver. Yet once again Kanaan was able to overtake Rahal after the stops. While Kanaan was using new hard-compound tires and Rahal old softer tires, Simon Pagenaud was using new softer tires and managed to get into second place before the last pit stop.

The final round of stops didn’t change the order of the top four. Yet the only caution of the race came out on lap 40 with 10 laps to go. The caution came out as Conor Daly crashed at Turn 1 when something had broken at the left rear of his Honda-powered No. 18 Dale Coyne Racing machine.

Power and Pagenaud were on new hard tires while Kanaan in third place was on new soft tires and Rahal in fourth place on old soft tires. The race restarted with six laps to go. With five to go, Kanaan overtook Pagenaud for the second place and a lap later also Rahal went past Pagenaud whose Chevy-powered car was having engine issues.

Kanaan was catching Power during the final laps and was under 0.4 second behind him when the final lap started. Yet Power had three push-to-pass uses remaining as opposed to Kanaan’s one and Kanaan didn’t get an overtaking opportunity on the final lap. Power crossed the finish line 0.7 seconds ahead of Kanaan to achieve his second season victory in consecutive races.

While Chevrolet-powered cars finished in first two positions, Honda-powered cars finished in third and fourth. Graham Rahal finished third, 5.9 seconds behind the winner Power. Ryan Hunter-Reay finished fourth for Andretti Autosport, having gained three positions during the six laps after the restart. Penske’s Helio Castroneves finished fifth and Ganassi’s Charlie Kimball sixth, both of whom were overtaken by Hunter-Reay during the final laps. Meanwhile the championship leader Pagenaud fell into 13th place while suffering from an engine issue.

Penske’s Juan Pablo Montoya finished seventh ahead of Josef Newgarden whose chances of racing at Road America seemed small after his crash at Texas Motor Speedway two weeks earlier. Despite a fractured clavicle and small fracture in his right hand, Newgarden was cleared to participate the KOHLER Grand Prix. Starting from 18th place, the Ed Carpenter Racing driver gained 10 positions during the race to finish in eighth place.