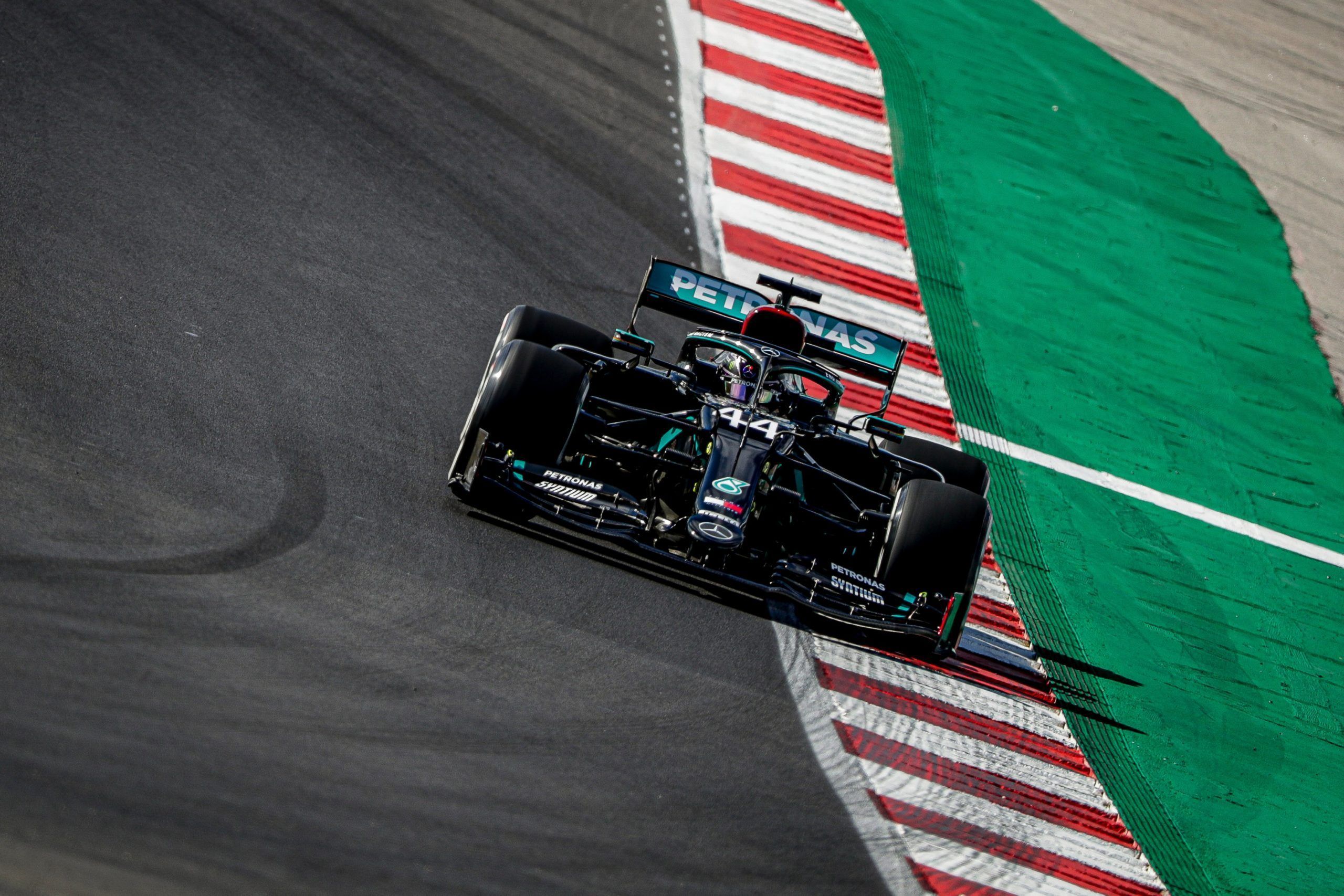 The F1 Portuguese GP qualifying at Algarve was delayed by half an hour as the organisers fixed the drain cover which came lose at Turn 14 at the end of the FP3 session. It kick-off eventually with Mercedes’ Lewis Hamilton leading the pack in Q1.

He had his lap deleted early on as the session saw more of it for several drivers. Red Bull Racing’s Max Verstappen was second with Mercedes’ Valtteri Bottas third as Williams’ George Russell pushed himself into Q2 after a quick last lap.

The second part in F1 Portuguese GP qualifying saw strategy on the side of Mercedes and Ferrari, who were on the medium compound, while Red Bull opted for the soft tyres. It was Bottas leading Hamilton after the latter got held up initially by Sebastian Vettel.

The Brit had to do another lap to be secured of Q3 place as Verstappen was third – but it will be medium vs soft for Sunday’s race. Behind, it was same lap of 1m17.367s from AlphaTauri’s Pierre Gasly and Ferrari’s Charles Leclerc for seventh and eighth.

It was soft tyres for Gasly while the medium for Leclerc. There was no much change at all in the second run which ended with a gravel trip for Renault’s Daniel Ricciardo but he managed to secure a Q3 position as Esteban Ocon (1m17.614s) just missed out.

The FIA noted about an incident between AlphaTauri’s Gasly and Racing Point’s Sergio Perez at Turn 13 to be investigated after the session – a possible impeding which wasn’t aired on the world feed.

The third part in F1 Portuguese GP qualifying had Bottas ahead with a 1m16.986s lap from Hamilton and Verstappen in the Top 3 as the Dutchman’s teammate Alexander Albon used the medium tyres to be only seventh fastest after his double lap.

Both AlphaTauri’s Gasly and Renault’s Ricciardo did not run the first time as the latter had his rear wing replaced after the Q2 off. The second run had an unusual choice from Mercedes with both the drivers taking the medium tyres for their final run.

After looking good early on, AlphaTauri’s Gasly was only ninth with a 1m17.803s as Renault’s Ricciardo managed to get out to get the feel of the track but was not able to set a lap time, where he ended up 10th.

UPDATE: The lap deletion count had just four for Turn 1 and only one in Turn 4 as drivers were extra cautious after the practice troubles. At the same time, Perez was given a reprimand for impeding Gasly in Q2 during Portuguese GP qualifying.

The statement stated: “The Stewards heard from the driver of Car 11 (Sergio Perez), the driver of car 10 (Pierre Gasly), team representatives and have reviewed multiple angles of video evidence and radio calls to the drivers.

“Perez had just aborted his lap at turn 10, although he was still traveling at relatively high speed. The topography between turn 10 and turn 13 is very hilly, and the drivers have very limited vision of the cars behind them. Further, the time between the turns is very limited.

“At the apex of turn 13 Perez’s team got a radio warning to him that Gasly was approaching at full speed. He immediately pulled to the left at the exit of the corner. However, at this point the fact that he was at the apex as Gasly approached definitely impeded Gasly.

“The Stewards considered the difficulty to see that was apparent at this circuit, and compared this incident to others during the season. The Stewards therefore felt that this fell on the very edge of being “unnecessary impeding” (as is stated in the regulation) and issued a Reprimand.”