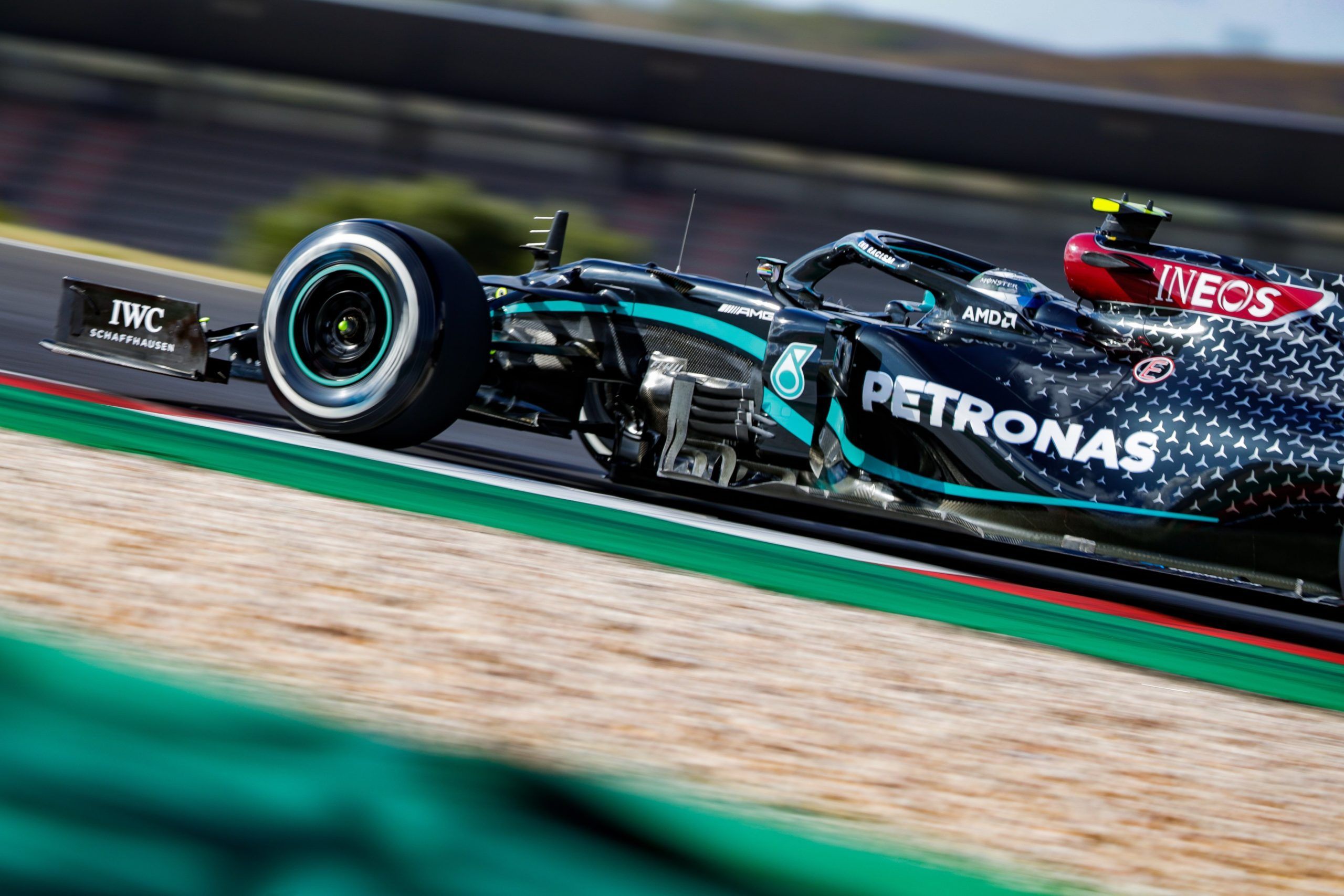 It was not a clean run again in F1 Portuguese GP FP3 session as drivers continued to have issues with track limits and off moments, which included a gravel trip for Mercedes’ Hamilton (1m16.680s), who finished 0.026s behind Bottas (1m16.654s)

Verstappen (1m16.812s) slotted in third while AlphaTauri’s Pierre Gasly (1m16.930s) was fourth with the new chassis as Red Bull’s Alexander Albon (1m17.117s) ended up fifth. The Dutchman set his best on medium tyres as did the Thai racer.

Behind the Top 5, Ferrari’s Charles Leclerc (1m17.229s) was sixth despite a spin in the session. McLaren’s Carlos Sainz (1m17.238s) ended up seventh even after having difficulties, as teammate Lando Norris (1m17.478s) was ninth.

In between the McLaren drivers was Racing Point’s Sergio Perez (1m17.297s) in eighth, while Renault’s Estebon Ocon (1m17.666s) rounded the Top 10 – they both set their time on the medium compound, where the latter was stuck at the pit exit.

The moment he left the garage, the session was red-flagged with under two minutes to go after Ferrari’s Sebastian Vettel ran over a drain cover, which popped up lose. The German finished 11th with a 1m17.685s with AlphaTarui’s Daniil Kvyat (1m17.720s) in 12th.

UPDATE: Despite the leeway with regards to track limits at Turn 1 and Turn 4 where laps would be deleted if the wheels go beyond the kerb, there were still problems for the drivers as the FP3 session saw 21 deletions at former and three for the latter.

Additionally, Russell has been pulled up for, ‘Alleged crossing the white line at pit exit after the red light was illuminated at 11:58 Alleged breach of Article 31.2 of the FIA Formula One Sporting Regulations’.

Russell was left off with a warning. The stewards stated: “The Stewards reviewed the audio and video of the incident along with the mapping data. Russell was executing a live launch from his pit stop position, which is the last in the pit lane.

“At the time he launched, the light at pit exit was green and remained green until approximately one second before Russell crossed the pit exit line. It was also apparent that at the moment the light turned red, Russell was looking in his mirror for the cars in the fast lane.

“Having exited the pits, Russell slowed and fully followed the requirements of staying positive to the delta time throughout his subsequent lap. The Stewards therefore took into account that the red light came on just before Russell crossed the line, and slamming on the brakes from a live launch was inadvisable, that the team advised him to drive in accordance with the regulations and that Russell proceeded safely. Considering these mitigating circumstances, the Stewards issue a Warning.”

Red Bull fine to look outside:

Aside the F1 practice session, Red Bull team principal Christian Horner went ahead to confirm that they will look outside their pool if Albon isn’t able to perform. The Thai has two weekends to sort himself out as they wish to finalise things by November.

“We want Alex to claim that seat and basically justify that there is no need to look at any other alternative,” said Horner to media including Motorsport Network, Racefans.net, Motorsport Week and more. “I think everybody in the team wants him to see him do that. And it felt like in Mugello it was starting to turn a corner and so on.

“He’s had a couple of difficult weekends. So he needs to bounce back here I think, and particularly Imola, with a strong, strong weekend from start to finish. So that’s our focus. As I say, he’s a popular member of the team. But we need two cars closer together in order to fight in order to fight the Mercedes, and that’s what we’ve got to do. That’s our target.”

Additionally, Horner – kind of – ruled out Pierre Gasly and Daniil Kvyat being drafted in as then they will look outside the pool. As things stand, Nico Hulkenberg and Sergio Perez seems to be the front-runners but Romain Grosjean and Kevin Magnussen are in the market too.

“I think AlphaTauri are pretty settled with their drivers,” said Horner. “But if we had to look at a different solution, then obviously, we would have to look outside of the Red Bull pool of drivers, simply because there’s not one available that we would look to look to put in. And there’s some quality drivers, obviously, on the market that could be unemployed for next year.”

Here’s what everyone said after Friday in F1 Portuguese GP

Here’s what happened between Lance Stroll and Max Verstappen