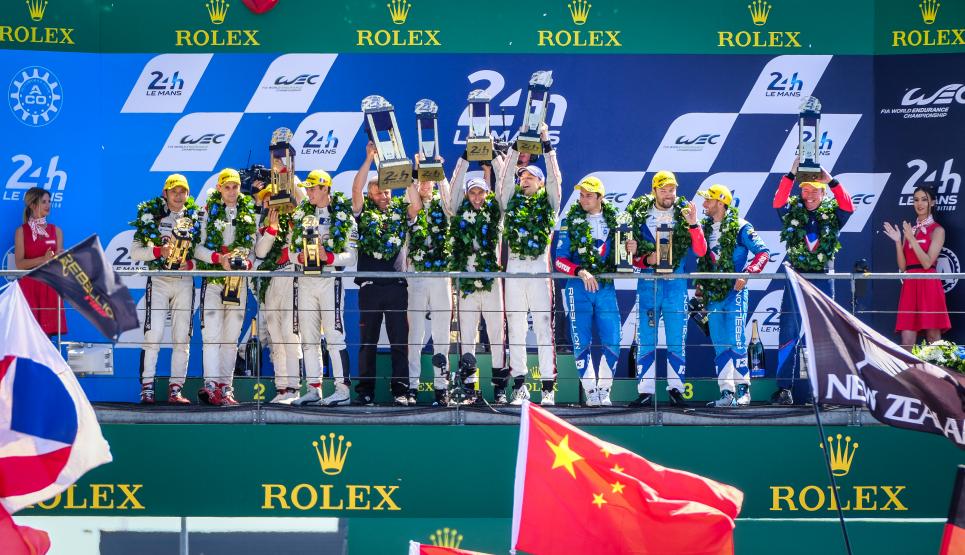 The 2017 24 Hours of Le Mans – third round of the FIA World Endurance Championship – was full of emotion, joy and disappointment, heat and drama, and it was Porsche LMP Team’s No.2 919 Hybrid which finally conquered all those sensations to take its 19th win at the world’s greatest endurance race.

Timo Bernhard and Earl Bamber both secured their second win at Le Mans, and Brendon Hartley his first, and the double points gained for the race win see the trio move into the lead of the FIA World Endurance Drivers’ Championship by 11 points over the No.8 Toyota crew (see points HERE).

Porsche’s win was remarkable as the No.2 lost 65 minutes in the pits for repairs in the first quarter of the race after losing front axle drive – a problem with its front motor generator unit/hybrid system.  Once back on track, the trio of drivers set about hunting down the lead and finally moved into first place at 15h53.

The No.8 Toyota TS050 HYBRID was the only other LMP1 car to finish the race, after Sébastien Buemi-Anthony Davidson-Kazuki Nakajima also staged a fight back after a similar front motor problem which occurred just before the 8-hour mark.

They came from almost two hours behind to finish 9th overall and 7th in the WEC points standings, setting a new fastest lap of the race (3:18.604) along the way although this was little reward for losing its previously dominant position at the head of the field.

Toyota’s suffered a disastrous night, losing both the No.7 and No.9 TS050 HYBRIDS within 20 minutes of each other – the first with a clutch problem and the latter following a collision with an LMP2 car.

Porsche’s No.1 919 was holding a strong lead over all the other competitors when André Lotterer was forced to pull over at the side of the track in the 21st hour with an engine problem.  It joined the two Porsches and the No.4 ByKolles Racing (engine, in the first few laps of the race) in retirement.

The deciding move for victory came on the penultimate lap as Adam’s No.97 Aston Martin Vantage GTE passed the No.63 Corvette at the Ford Chicane, following a lock-up on the Mulsanne Straight that resulted in a left-front puncture for the Corvette driver.

It was Darren Turner’s 3rd class victory at Le Mans, and a first for both Adam and Brazilian driver Serra who was making his first appearance in the race.

The American car managed to limp across the line but not before also losing second place to the No.67 Ford Chip Ganassi Team UK GT of Harry Tincknell, Andy Priaulx and Pipo Derani.  The resulting points keep the trio at the head of the points standing in the GT Drivers Championship.

Five different manufacturers filled the top-five positions in a race that saw at least 5 or 6 cars on the same lap for nearly the whole of the 24 hours.

A late splash-and-dash dropped the No.91 Porsche 911 RSR of Frédéric Makowiecki, Richard Lietz and Patrick Pilet to 4th on the mid-engined car’s first outing at Le Mans, with the No.71 AF Corse 488 GTE shared by Sam Bird, Davide Rigon and Miguel Molina finishing 5th.

Nicki Thiim, Marco Sorensen and Richie Stanaway fought back from a left-rear puncture in the early stages to the lead by the early morning, before Stanaway made a mistake and crashed at Mulsanne Corner, dropping the car to 9th.

The major beneficiary of this appeared to be the No.51 Ferrari of James Calado, Alessandro Pier Guidi and Michele Rugolo, but they lost over an hour in the pits with radiator damage following a clash between Calado and a LMGTE Am Aston Martin.

It was a tough race in LMGTE for the WEC runners, with the first four places going to non-championship cars. The ELMS’ JMW Motorsport took the victory, with the No.61 Clearwater Racing Ferrari of Mok Weng Sun, Keita Sawa and Matt Griffin taking 4th on the track but enough points to take them to the top of the LMGTE Am drivers’ championship.

The Singapore entry was just in front of the No.77 Dempsey Proton Porsche 911 RSR of Christian Ried, Matteo Cairoli and Marvin Dienst which finished 6th in class.