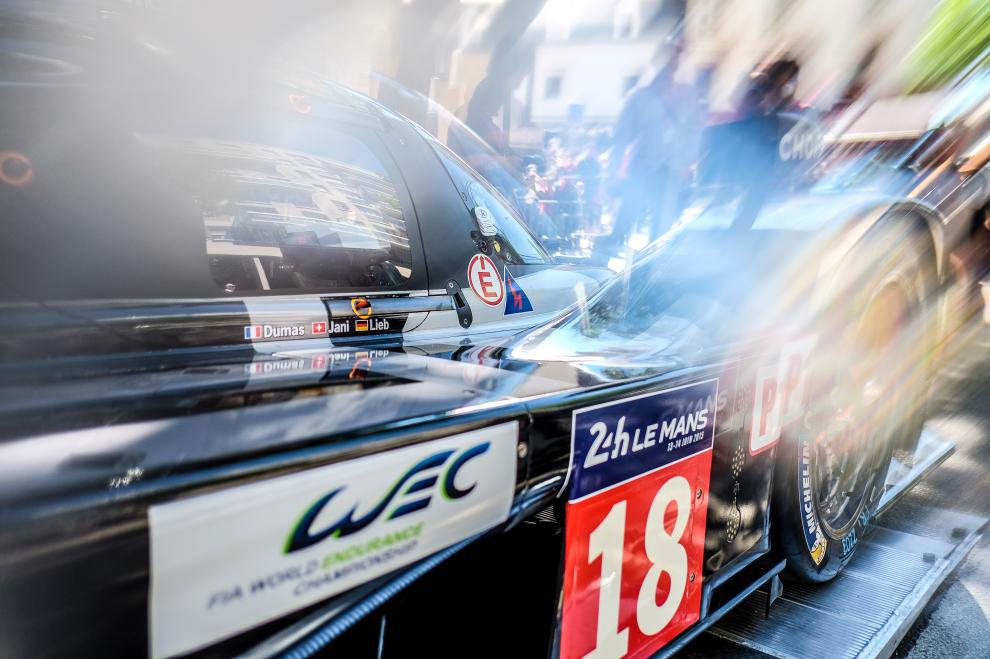 The no18 Porsche of Neel Jani posted the fastest qualifying lap of the current configuration of the Le Mans circuit.  The Swiss driver crossed the start finish line after just 3m16.887 to complete a lap of the 14km circuit in the first qualifying session, smashing the previous qualifying lap record of 3m18.513 set by Stéphane Sarrazin in a Peugeot 908 HDI-FAP.

The session was red flagged after the no41 Greaves Motorsport went off into the ryres at the Mulsanne Corner.  The tyre wall were damaged in the impact and took time to rebuild.  Once the job was completed the green flag was shown to start the final 35 minutes of the session.

The no12 Rebellion Racing R-One AER was the quickest of the three LMP1 privateers, with Mathias Beche setting a 3m26.874 lap and 9th fastest overall.

The no47 KCMG Oreca 05 Nissan was once again the star of the show with Richard Bradley setting a 3m38.032, faster than all three works Nissans and 0.926 faster than the nearest class rival, the no41 Greaves Motorsport Gibson-Nissan of Jon Lancaster.

The no99 Aston Martin Racing Vantage V8 finished as it did in the earlier Free Practice session at the top of the class with Richie Stanaway setting a 3m54.928 lap.  The nearest rival was the no51 AF Corse Ferrari of Gianmaria Bruni, who was just 0.3 seconds adrift of the New Zealander’s time and 0.160 ahead of the no97 Aston Martin of Stefan Mucke.

The fastest GTE Am car was again the championship leading no98 Aston Martin Vantage of Pedro Lamy.  The Portuguese driver’s lap of 3m55.102 was the second fastest lap posted by a GTE car, splitting Stanaway’s Aston Martin and Bruni’s Ferrari on the time sheets.  The closest GTE Am rival was the no83 AF Corse Ferrari of Emmanuel Collard with a lap of 3m58.723, 3.6 seconds adrift of the leading Aston Martin.