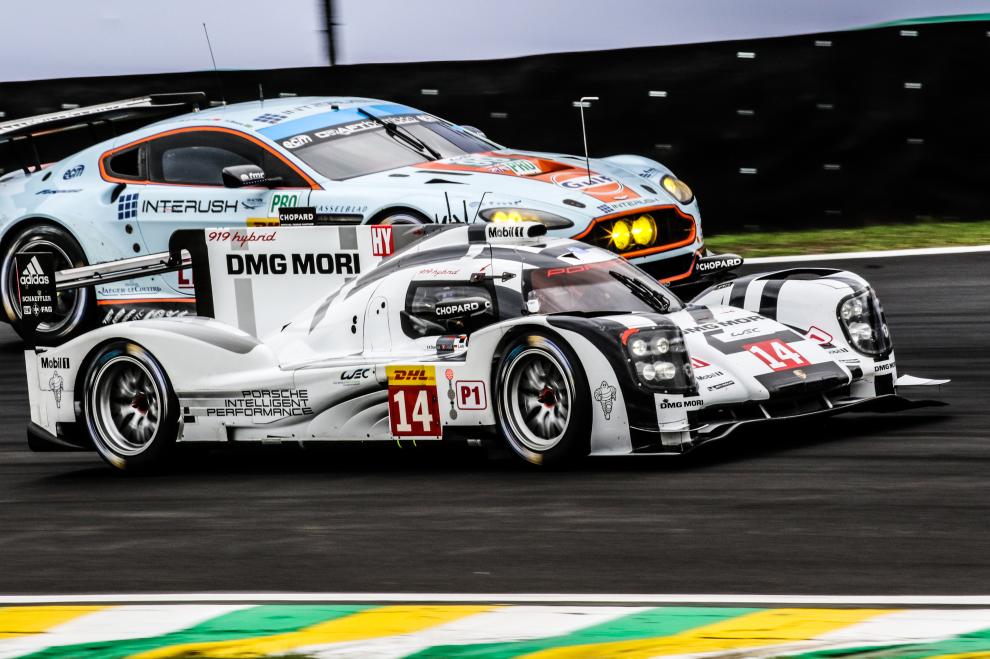 The German team won its first race after more than 10 years without competing in the category. First position for the Porsche #14 followed by the Toyota #8 and the Audi #1.

The Porsche #20 held the lead at the start, behind him, the Toyota #8 and #14 Porsche. Problems for the Audi #2 which stood on the grid.

The Porsche #20 set a good pace in the early stages of the race opening a gap with Toyota #8 which had nearly the other Porsche.

The Lotus P1 / 01 had problems and at 20 minutes of the race was inside the box.

In GTE, Aston Martin were leading with #97 first and #99 second.

After the first round of pit stops, positions were maintained but the difference between the Toyota #8 and #14 Porsche was increased.

After the first hour of the race, strong accident of the Ligier of G-Drive, the stewards pulled out the Full Course Yellow for withdrawing the car that had run out of brakes.

With less than four hours to go, the Toyota #8 was touched with Prospeed’s Porsche and he spun. Unfortunatly he was relegated to the fourth place.

Disasters in LMP2 where all cars had problems, punctures, track outputs, hitts against the wall, there was no fighting at any time because they were all in different laps.

But Buemi doesn’t give up and he began to push, cutting the gap to the car in front but when Davidson came in to do his turn things got worse because he was forced to push and he made some mistakes.

From there the race was decided by strategy as they were all very close together but the Porsche shown that they have superiority.

A Drive Trough for Toyota #7 let them out of the podium, which was occupied now by the Audi #1.

In the last half hour to go, Mark Webber with Porsche # 20 had a very strong crash, impacting with high speed into the barriers, thankfully Mark is fine.

This caused the out of the Safety Car and the end of the race.

Win for the Porsche #14 followed by Toyota#8 and Audi #1 with Tom Kristensen at the wheel, finishing his career at 47 and with 9 wins at Le Mans.

In LMP2 victory of the Oreca of KCMG, who was the only in his category in finish in that lap, following them the SMP at more than 20 laps.

And here ends the WEC season of 2014, Toyota wins drivers’ and teams’ championship in a year where they have dominated.