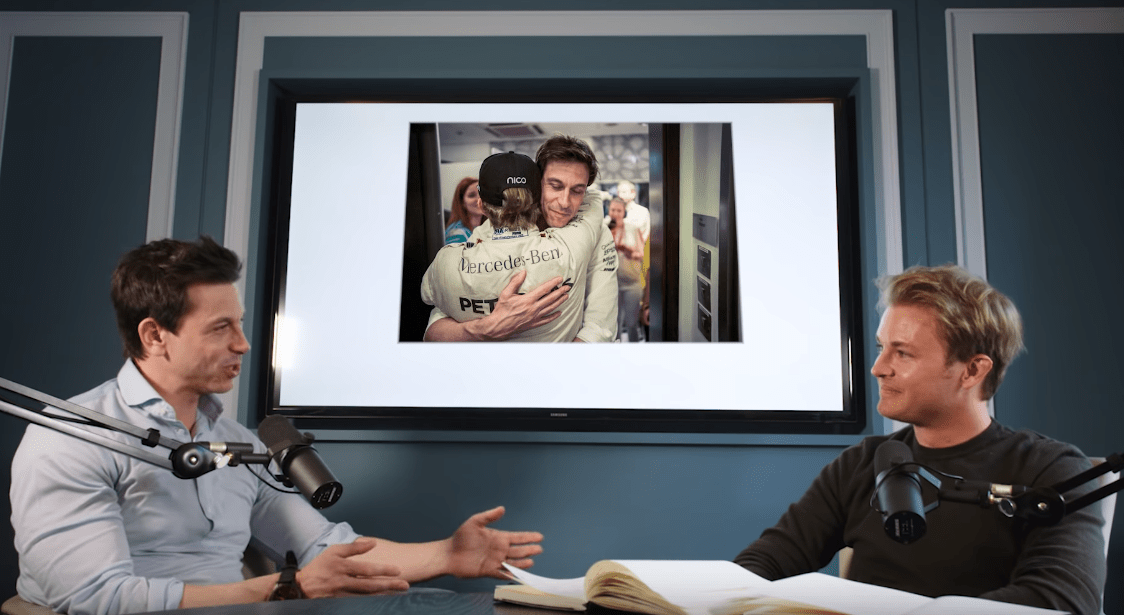 Nico Rosberg returned with his first episode of Beyond Victory podcast in 2019 with his former team boss Toto Wolff as the guest.

The podcast was recorded in Monaco during the 2019 Barcelona pre-season test with the first topic about Wolff’s foray into business. The Austrian reveals a story about one if his earlier’s business of selling candles at the age of 17-years of age.

Wolff discusses his early life where he never had the best of financial condition after his dad died at 40-years. He even revealed that he was asked to leave the school with his sister due to non-payment of tuition fess.

They then discuss about each other’s motivation and how they have managed to lead a successful life even with all the self-doubts. On his return to racing – as a businessman this time – Wolff talked about success with Williams which got Mercedes interested in him.

He reveals of meetings with the Diamler board members which eventually led to his work with Mercedes, where he is the shareholder as well. The model worked for him and the team and has brought several accolades despite the tough times.

On the topic of model, Rosberg brought narcissism where the German felt a narcissist can find success and remain as one without failures as he thinks the person will adopt to the issues and make it his strong point but Wolff felt the person will eventually fail one day.

They took the example of Max Verstappen, who Rosberg thinks is narcissist with the Dutchman’s persistence of pushing at extremes. Wolff recalled the clash with Valtteri Bottas when talking about him but he reckons it is about maturity which will come into him.

They then moved to the topic of taking criticism, something which Wolff is not very good at but says he now getting better which brought his wife Susie Wolff in the mix, whom he regards as one of his best critics – from whom he can learn.

Rosberg then brought the topic of mental health in the discussion which both regard as a taboo still – whether in general or in F1. Wolff talks of the initiatives he has taken plus what he has learn in life so far, where one of the steps he has taken is ‘self-realisation’.

In the age of internet, he thinks people don’t sit back and think as they keep themselves occupy with what is happening on social media. The discussion then moved to how to handle failures and leadership as they ended it on Wolff talking about his life ahead.