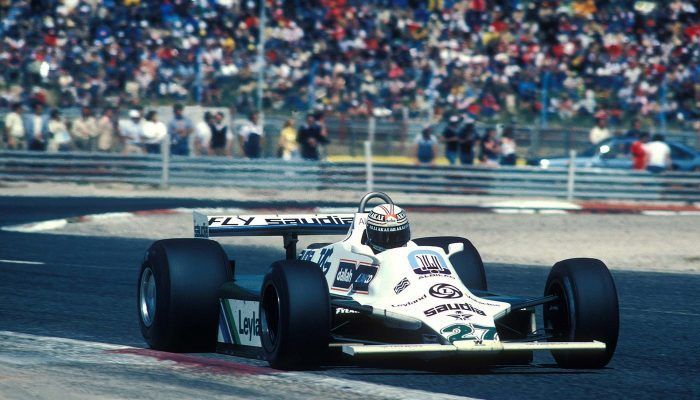 The seventh episode of F1 Beyond The Grid podcast for 2019 has the 1980 champion Alan Jones talk about the current drivers, his Williams tenure and more.

Jones starts the Beyond The Grid podcast talking about the current state of F1 drivers being unlike anything of the past, with them becoming corporate puppet so that they don’t end up offending anyone wherever they go.

And so, he doesn’t think that anyone on the current grid is like him but feels that Kimi Raikkonen can be someone he can relate too in terms of personality, regarding enjoying the sport rather than getting into the politics and frustrating oneself.

He then opines on what the current F1 should be, insisting on cutting down the front wing to a plain figure as opposed to the layers it has now and chopping the windtunnel time so as to save money. The topic then shifts to his racing days, especially with Williams.

He reveals that he had an offer to race for Ferrari but the Italian manufacturer put up a clause that they would sign him if Mario Andretti doesn’t – as they wanted an American driver to boost its sale in the North American region.

With Andretti signing with Lotus, Ferrari opted for Gilles Villeneuve instead which forced Jones to move to Williams, where he had a good bonding with Sir Frank Williams and also Patrick Head. He then discusses his Williams stint and the 1980 title.

The talks also bring the topic of his teammate Carlos Reutemann with whom his relation was never good and it worsened after the 1980 Brazilian GP, when the Argentine broke the team rule, which he signed on his contract when joining Williams.

Jones also clarifies that he didn’t attend the podium in Brazil as he couldn’t stand in rain for long, as when he went for the podium ceremony after the race, he couldn’t find anyone. Talking about ending his career, the Australian said he wasn’t too sure until the finale.

It was only in 1981’s grand prix in Las Vegas, that Jones informed Williams that he won’t re-sign and retire from the sport. He said it was more to do with being burnt out with the constant travel and politics in the sport at that time and wanted to move away.

He had offers from Alfa Romeo and Renault but he turned them down. In fact, he also had a call from Ferrari again in 1982 when Didier Pironi died in a crash but to his misfortune he missed it and the drive went to Andretti eventually.

He had his return then in 1983 and then in 1985 and 1986 but the Ford engine they ran with just didn’t work. He then talks about farming which he didn’t like, while he ended the podcast talking about his Montreal win in 1980 as his best.

He also added on Daniel Ricciardo’s move to Renault which he thinks is correct in terms of money and also finding his own stature in the team whereas Red Bull focused on Max Verstappen. He also put Sebastian Vettel as the winner of 2019 season.

[Note: The podcast was recorded during Australian GP before the start of the season]

Check out what Sergio Perez had to say on the podcast