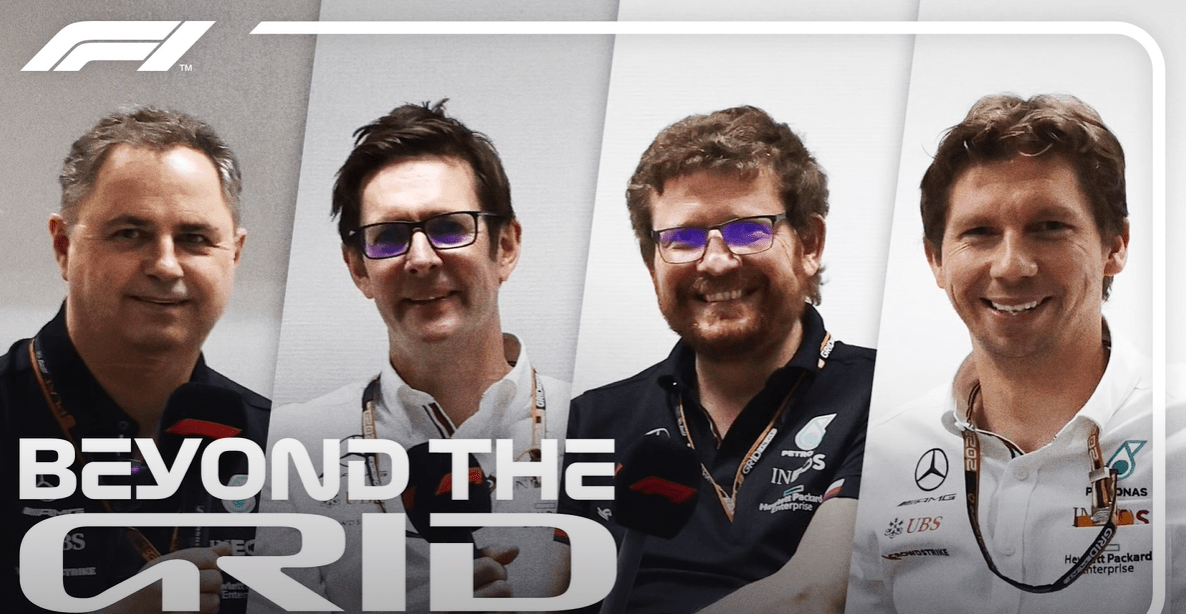 A band of long-time Brackley F1 staff reflect on over 20 years of competition from their UK base, including the successful last seven years as Mercedes.

The “fab four,” as they’d been dubbed by host Tom Clarkson in reference to the University of Michigan’s “fab five” basketball team in 1991 and 1992, was subsequently asked about what makes Mercedes the dominant force that they are, to which Shovlin said team culture was the biggest factor.

A question was later directed at Meadows regarding how significantly the team has changed since its first championship effort in 1999, and the Brit cited a vast difference in size between the 1999 team and the outfit in its 2021 form. Meadows then spoke on his role changing, before dismissing engineer Adrian Reynard’s suggestion that BAR would win in their first season as a goal despite how it had been framed by some media organisations.

After extensive discussion on the evolution of F1 testing, Vowles was asked about how data acquisition has exploded in the sport, with 50,000 channels of higher-quality data now flowing into the garages. The Brit interestingly shares that he has observed a slowing trend in the growth of data in F1.

The group lit up at the mention of the 2005 Monaco GP, when they say they developed a bad boy persona of sorts after being banned for two races in the wake of the team illegally running underweight cars. They did, however, deny that they felt they were the target of the FIA in the midst of this scandal, or the other controversies which surrounded the F1 team early.

Vowles described a rift between the team’s Brackley base and its owners Honda in the early stages of their ownership under the Japanese manufacturer, which he says even sought to produce chassis’ without the help of BAR, which it had deemed inept as a result of differences in style of work.

Cole then spoke on Honda’s withdrawal from F1 in December 2008, saying that the sale of the team came as a shock of sorts – despite the team knowing they were “in trouble”, before Meadows described how the team were informed, and the difficult process the team’s top dogs endured as they faced a F1 team on the verge of collapse.

Shovlin recounted how Ross Brawn led the team in this time of crisis, before discussing the development of the 2009 Brawn GP car, a championship-winning F1 car which featured an innovative double diffuser – something so beneficial that the team initially thought they’d miscalculated data, Shovlin said.

Meadows denied that the use of a Honda F1 engine for Brawn GP in 2009 was ever on the cards, before the group shared more stories of the 2009 car and their “emotional” season in that year – which began in remarkable fashion, with a one-two they confess may have been lucky.

Amid their early season success, Vowles says he was uninterested by the championship, taking the year “race-by-race,” as he feared funds could dry up and leave the F1 team unable to support a continued championship effort. The Brit’s comments ignited much conversation on Brawn’s season, leading to banter between team members.

After speaking on the team’s switch from Mercedes to Brawn, team members admitted that Michael Schumacher’s presence in the team could be “daunting” from time to time, but was nonetheless beneficial as the German brought experience to the team. Shovlin was particularly impressed by the German’s willingness to exploit any possible advantage.

When asked about Schumacher’s tenure at Mercedes and his near-pole position at Monaco, Vowles heaped praise on the seven-time F1 champion, who he was “heartbroken” for when he saw him go winless for Mercedes despite his efforts. Shovlin recounted how Schumacher, for whom he was race engineer, was “never overloaded” when given feedback, and always responded well. Cole also revealed that he was taken aback by the seven-time champion’s way of engaging with engineers to understand the data as best he could – something neither he nor the other Mercedes engineers had ever seen before.

When asked about the 2014 season and whether or not they knew Mercedes was going to see improved results at any point earlier, Vowles noted the arrival of Toto Wolff in 2012 as a turning point, as the Austrian immediately went to the board to ask for more funding – a move which set them on course to achieve championship success down the line. The group also partially credited Niki Lauda’s influence.

The group denied that there were any parallels between Brawn’s 2009 F1 campaign and that of Mercedes in 2014, citing how team culture had changed from one of survival to one of stability. Cole then explained that, although animosity grew between drivers Lewis Hamilton and Nico Rosberg, the effects of this were never felt in the garage, beyond “a few moments.”

Meadows then chimed in to share his view that Rosberg seldom gets the credit he deserves as a driver, and the group collectively agreed that the German’s departure after winning the championship in 2016 came as a surprise. When the group was later asked about Hamilton and his strengths, Shovlin was the first to answer, as he praised the Brit and his “relentless” efforts to improve. Vowles added that the restraint of Hamilton is a strength of his, citing the 2020 Austrian GP – when he says both cars were “kilometers” away from failure.

When asked what Gorge Russell lacked in his Mercedes debut at last year’s Sakhir GP when compared to Hamilton, the group found it difficult to pinpoint specific differences, but Shovlin pointed out that the latter would have likely started on pole, and had more control of the F1 race, but nonetheless praised Hamilton.

Asked how close the four are, they responded that the group remains “family” after 20 years, and point out how no senior members of the team have parted ways for other outfits. After each were asked their favorite driver to work with to which each barring Vowles (who answered with Toto Wolff) said Schumacher, the podcast ended.

Here’s where you can listen the podcast (FOM has blocked from embedding): https://audioboom.com/posts/7838566-mercedes-fabulous-brackley-boys-on-20-years-of-racing-with-button-schumacher-rosberg-and-ham

Here’s last F1 Beyond The Grid podcast of Kamui Kobayashi