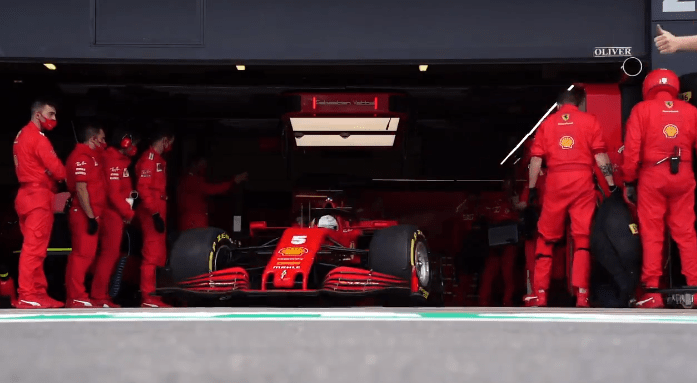 Pirelli Motorsport will not be testing the 2021 compound in F1 70 weekend as Ferrari completes filming day at Silverstone.

Having announced two tests for the 2021 prototypes, Pirelli has pulled out of testing it during this F1 70 weekend at Silverstone. The Italian manufacturer’s decision comes after the troubles during last weekend’s British GP at the same venue.

The warmer conditions and longer stint pushed the tyres to the end of its life and it punctured for Mercedes’ Lewis Hamilton & Valtteri Bottas and McLaren’s Carlos Sainz. They are using the softer C2, C3 and C4 with C1 being dropped for this weekend.

The idea from Pirelli was to test the 2021 prototype at Silverstone and Barcelona but with the notion that F1 teams will be needing as much track time to adjust with the softer compounds, it will be unfair to ask them to have the blind testing.

With the 2020 F1 season getting more rounds fixed, Pirelli is hoping to test the 2021 prototype at other venues with Barcelona destined to be one. “For this weekend we have decided to cancel the test that was planned for Friday,” said Pirelli F1 boss Mario Isola.

“In order to give the possibility to the teams to use all of FP2 for their testing, their long runs, and so on. At the moment the test in Barcelona is confirmed.” Pirelli has a headache for 2021 as the tyres from 2019 is carrying over with tweaks.

However, the F1 cars would still be getting quicker even if downforce levels are being checked. They can increase the pressure but it will lead to overheating which drivers won’t like. They are working on measures to help have a better tyres in 2021.

For 2020, though, seeing the troubles at Silverstone, Pirelli is wary of new tracks like Mugello and Portimao, which is supposed to be hard on tyres too. “We have also to consider what we have to do for high severity circuits – Mugello and Spa for sure.

“I’d also add Portimao, which is not known, but from the information I have from our GT guys it looks quite demanding. We collected a lot of data from Sunday’s race that would be useful,” said Isola. Aside the test news, Ferrari completed its filming day.

Following their one at Mugello before the start of the 2020 F1 season, this was their second and final at Silverstone, with Sebastian Vettel driving the SF1000. It is unclear if Charles Leclerc also had his chance, though, with Ferrari only sharing one video.