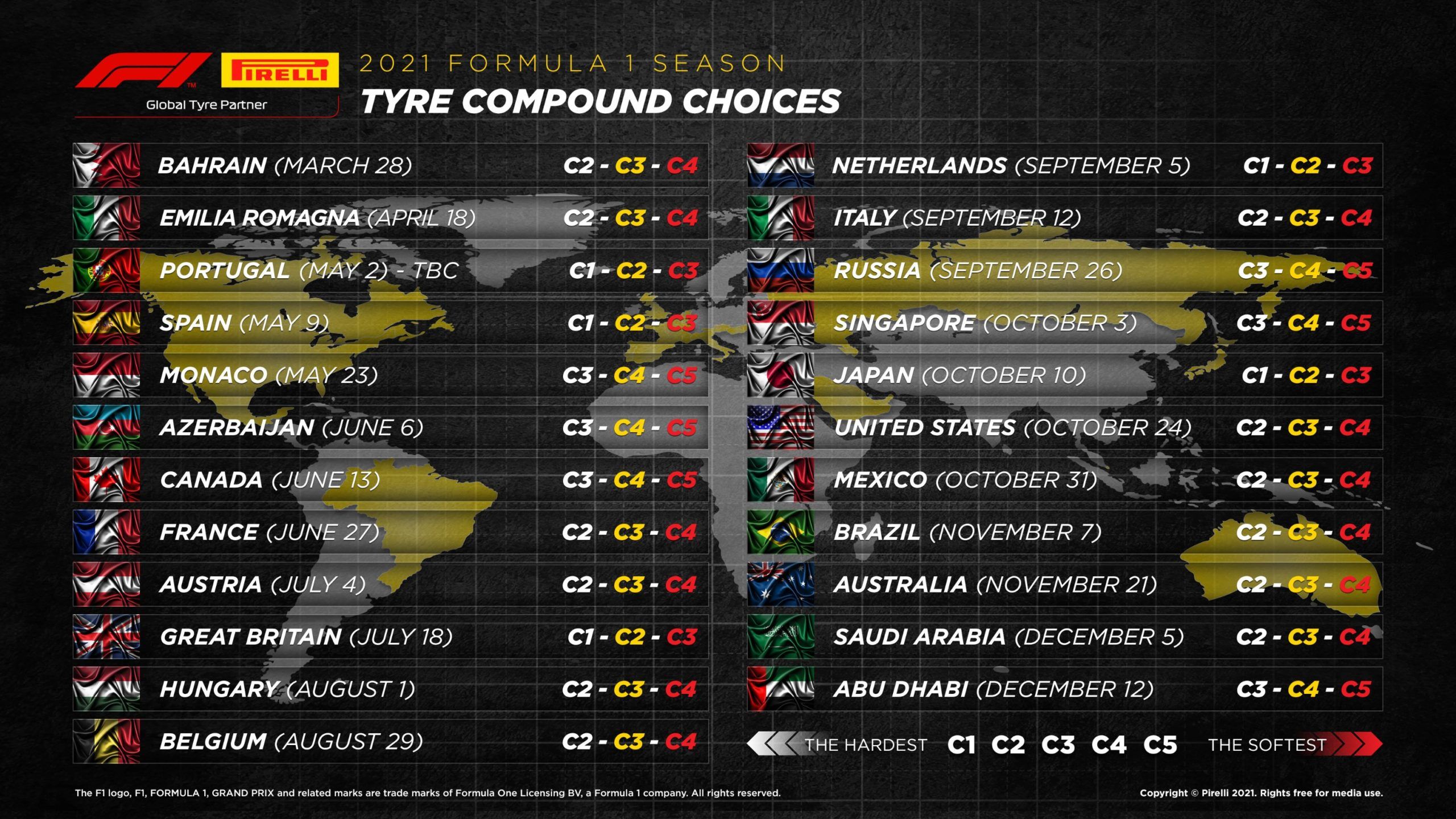 Pirelli Motorsport has revealed the compound choice along with the sets for all of the 23 F1 races in the 2021 season, as Williams extends deal with Financial Times.

With COVID-19 disruption, the FIA along with the F1 teams decided to revise the compound choice ruling for the 2020 season, where Pirelli fixed the compound choices and the number of sets to be given to each driver for all of the races held last year.

Given the success of such ruling, it was decided to have a similar regulation in 2021 as well. And so, Pirelli has revealed the compound choice and also the fixed sets for all of the 23 F1 races that we will see during the course of the 2021 season.

The fixed allocation will see each driver get two sets of the hard compound, three of medium and eight of the soft, throughout the 2021 F1 season. While the choices and allocations is fixed, Pirelli and the FIA can alter them up to 15 days before each event.

Looking at the table, the pairing of C2, C3 and C4 is the most common choice, as it will be seen in races like Bahrain, Emilia Romagna, France, Austria, Hungary, Belgium, Italy, United States, Mexico, Australia and Saudi Arabia.

Interestingly, Pirelli has more or less confirmed that the May 2 event will be held in Portugal, which the F1 commission decided upon in their last meeting, but hasn’t been officially confirmed or fixed yet, as the deal is yet to be signed.

“Announcing all the selections for the year right now will help the teams and the drivers with their planning, also allowing for maximum flexibility just in case the calendar has to change due to Covid-19 restrictions, as we saw last year,” said Pirelli head Mario Isola.

“The selections themselves are on the whole similar to last year (or 2019, in the case of races not run in 2020), which means that teams should have plenty of data to fall back on – but we have two races where the nominations are softer.

“The first is Azerbaijan, where our C2 hard tyre wasn’t used last time, so we are now going with the softest selection of all: C3, C4 and C5. Then we have Brazil, where we will take the C2, C3 and C4 this year, as the C1 that was selected as the hardest choice last time didn’t show a particularly big advantage in terms of wear over the medium. In both cases, the softer nomination could lead to a greater variety of race strategies.”

Here’s the full table from Pirelli:

In other F1 news, Williams announced the extension of its deal with Financial Times, with whom they kick-started their partnership in 2019. They will continue to work together on the successful Sports Innovators Series, a forum to discuss the areas of sport undergoing significant transformation.

Upon the announcement, Tim Hunt, Commercial and Marketing Director for Williams Racing said: “We are delighted to be able to continue our relationship with the Financial Times for the 2021 season. Working with the FT helps bolster our core offering to partners and gives us further outreach as a team on a global scale.

“Through the partnership, we have a unique opportunity to grow our brand and connect with new customers, but also to support our whole partner family to achieve commercial success. We look forward to building on our relationship with the FT this season and for the years to come.”

At the same time, David Buttle, FT Global Commercial Marketing Director added: “It’s fantastic to be renewing our partnership with Williams in this new era for the team. This extension reflects our commitment to growing the FT brand in support of our global subscription business.

“Uniquely, this partnership also allows us to work together with Williams to develop integrated commercial solutions that are truly greater than the sum of the parts. We’re excited to further build on the strong foundation that we have put in place over the last two years and wish the team the best of luck on the track in the 2021 Formula One season.”